Their new book, 'Renegades: Born in the USA,' is a print adaptation of their Spotify podcast series 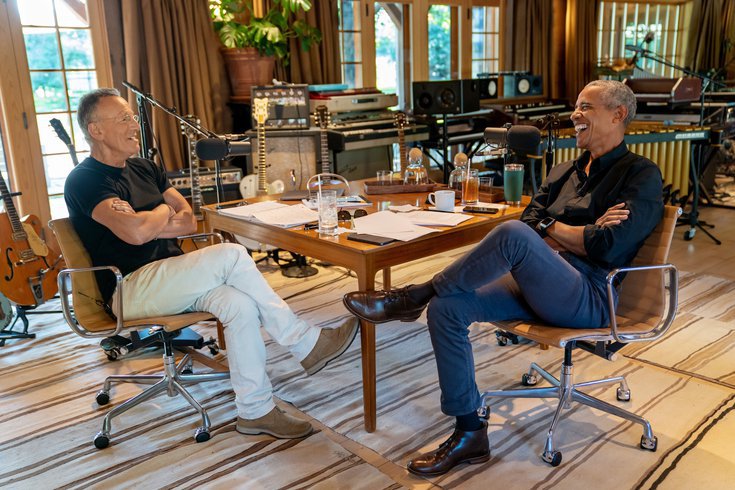 Bruce Springsteen and former President Barack Obama are no longer just friends. They're now co-authors of "Renegades: Born in the USA," a book released Tuesday and based on their Spotify podcast series.

The podcast, which premiered in February, featured them discussing a number of topics, including marriage, fatherhood, music, race, masculinity, the country's future and their most inspiring American heroes. Both men also shared stories about their career-defining moments and origins.

During an appearance on "The Late Show with Stephen Colbert" on Monday night, Springsteen said he was quite surprised when Obama asked him to collaborate on the podcast.

"[Obama] called me, which of course I thought he had the wrong number, because he's a Columbia University graduate, teacher of constitutional law at the University of Chicago law school, first African-American president of the United States," Springsteen said. "I am a guitar player. I am a Freehold Regional High School graduate."

Springsteen trailed off as he made a face of disbelief that Obama would want to partner with him. But he said the collaboration provided him a special privilege reserved to only a few: the right to call Obama by his first name.

"Well, I actually asked him about [calling him Barack]," Springsteen told Colbert. "I said, 'How do you want to be referred to?' and I would assume Mr. President. But he said, 'Call me Barack.' And then he asked how I wanted to be referred to, and I said 'Mr. Boss, please.'"

Springsteen and Obama first met during a series of campaign performances that Springsteen and the E Street Band did for Obama during the 2008 presidential race.

Obama awarded Springsteen with the Presidential Medal of Freedom, the nation's highest civilian honor, in November 2016. The New Jersey native also played a private "thank you" show for Obama before he left office in 2017.

In the book, Springsteen described the state of the country as "treacherous times with much at stake, with everything at stake." But he said he remains optimistic about the future of the nation.

"You have to be a fighting optimist, I believe, in the sense that there was an attempt to overthrow a free and fair election," Springsteen told Colbert. "It failed.

"It's a cliche but ... I have to [remain optimistic). I don't have a choice. The other choice is unthinkable. I have to remain optimistic. Seeing my kids out in the George Floyd and Black Lives Matter protests, seeing the diverse group of young people in the streets the day after the election. It's a cliche, but that's what keeps me optimistic. I think there's a great generation of young people coming up who will be interested in protecting American democracy and things like the fundamental right to vote, all of which are sort of an endangered species at the moment. That's my hope."

On "Colbert," Springsteen also talked about his famous "No Nukes" benefit concert series at Madison Square Garden in September 1979. It will be released as a film and album in November.

The musician was 30 years old at the time, but Springsteen told Colbert that not much has changed over the last four decades.

"Well, it's funny, on stage I don't know if there's a lot of difference," Springsteen said. "We still come out and we take it all the way every night that we're on stage. I mean, that's a completely different person. At 30, I was still a kid and that was my entire life. No art-life balance, just work, work, work, work. But basically, I still feel about it the way that kid would have. It hasn't changed at all."

The rock star also discussed the guitar he used to play "Born to Run." He bought the guitar when he was 22 for $185 at a Jersey Shore music shop. Springsteen said that he doesn't bring the 50-year-old instrument on stage much these days after playing it in "every club, theater, arena and stadium across America and most of the world."

Springsteen closed his appearance with a performance of his 1979 hit "The River." Springsteen wrote the song about the blue-collar life of his sister and her husband. The Rock and Roll Hall of Famer considers the track as the beginning of his narrative writing style that inspired future albums like "Nebraska."