Stretch of Columbus Blvd. in South Philadelphia to be renamed Thursday after 'Band of Brothers' vets 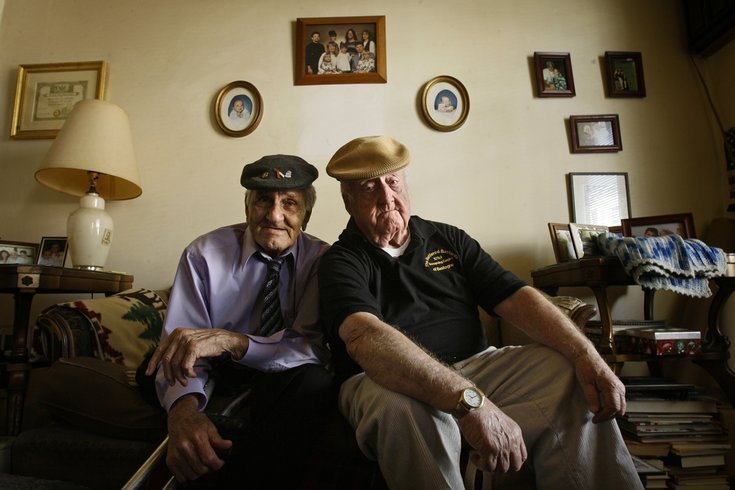 William Guarnere, left, and Edward Heffron pose together in Philadelphia, Tuesday, Sept. 18, 2007. Both veterans of World War II, they have since passed away.

A section of Columbus Boulevard in South Philadelphia will be renamed in honor of two Philadelphia natives and World War II veterans, both deceased, who were portrayed in the HBO miniseries "Band of Brothers."

In a renaming ceremony expected to take place at noon on Thursday, the stretch of the roadway from Washington Avenue to Oregon Avenue will be designated as the William J. Guarnere and Edward “Babe” Heffron Memorial Boulevard, NBC10 reports.

Guarnere, also known as "Wild Bill," served as a staff sergeant in the U.S. infantry, and as a paratrooper, landed in Normandy during the D-Day invasion, fighting during the Battle of Normandy, Operation Market Garden and the Battle of the Bulge.

For his service during the war, he was honored with the Silver Star, the Bronze Star and the Purple Heart.

Edward "Babe" Heffron was a private in the infantry and also fought in Operation Market Garden and the Battle of the Bulge, earning the Bronze Star and Purple Heart.

In the 2001 HBO miniseries "Band of Brothers," produced by Tom Hanks and Steven Spielberg and based on the non-fiction book of the same name, Heffron was portrayed by actor Robin Laing, and Guarnere was portrayed by Frank John Hughes.

The two co-authored a book called "Brothers in Battle, Best of Friends: Two WWII Paratroopers From the Original Band of Brothers Tell Their Story" along with journalist Robyn Post in 2007.

State Rep. Bill Keller, D-Phila., will host a ceremony on Thursday at the River View Shopping Center on Columbus Boulevard, and Mayor Jim Kenney is expected to be in attendance.