How to identify and help someone with an eating disorder

From anorexia nervosa to binge eating, most involve focusing too much on weight, body shape and food 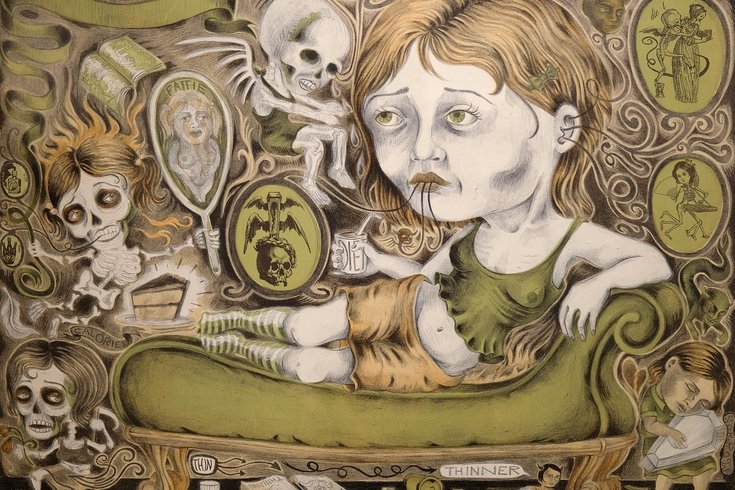 "Anorexia Girl," by American artist Jenny Schmid, a 2002 lithograph on paper, is part of the collection of Tweed Museum of Art, University of Minnesota – Duluth.

Why certain people suffer from eating disorders is complex and can vary depending on a lot of factors – including biological, psychological and sociocultural. Each person’s journey is personal, but what we do know is that eating disorders are more prevalent then you might think, and they can have serious health consequences.

About 20 million women and 10 million men will have an eating disorder in their lifetime, the National Eating Disorders Association estimates.

The Mayo Clinic reports that “most eating disorders involve focusing too much on your weight, body shape and food, leading to dangerous eating behaviors. Eating disorders can harm the heart, digestive system, bones, and teeth and mouth, and lead to other diseases.”

Men, women and teens with anorexia nervosa tend to have a distorted body image and extremely restrict both their caloric intake and the kinds of foods they eat. Keep in mind that someone doesn’t have to look emaciated to be anorexic.

Warning signs include: extreme weight loss, being obsessed with calorie counting, cooking for others but not eating themselves, constantly doing intense workouts to burn off calories, and rarely eating in public. People with anorexia often pull away from family and friends as well.

People with bulimia nervosa regularly engage in a cycle of binge eating and purging, usually at least once a week. They also have a poor body image.

Warning signs include: an obsession with weight loss and dieting, periods of overeating followed by disappearances into the bathroom to secretly vomit. People experiencing bulimia also are likely to have food rituals like only eating certain foods and the hoarding of food.

The Binge Eating Disorder is the most common eating disorder in the United States. A person with this disorder will feel the need to stuff themselves with food to the point of discomfort and then be ashamed of their actions after. There is no purging or unhealthy limiting of calories to compensate.

Warning signs include: not wanting to eat around others, complaining of stomach issues, following all the latest diet fads and the hoarding of food for the next binge session. The weight of a person with a binge eating disorder will often fluctuate.

Avoidant/Restrictive Food Intake Disorder is not about weight or body image, but a lack of interest in eating due to a fear of choking or vomiting, or a desire to avoid certain foods because of sensory issues.

Don’t ignore the signs of an eating disorder. Electrolyte imbalance and cardiac arrest can be fatal. If you are concerned that a loved one has an unhealthy relationship with food and their body, then encourage them to seek help. Treatment usually includes a combination of psychotherapy, medical care and nutritional counseling.

If you are not sure where to start, call the National Eating Disorders Association hotline at 1-800-931-2237 or visit their resources page.