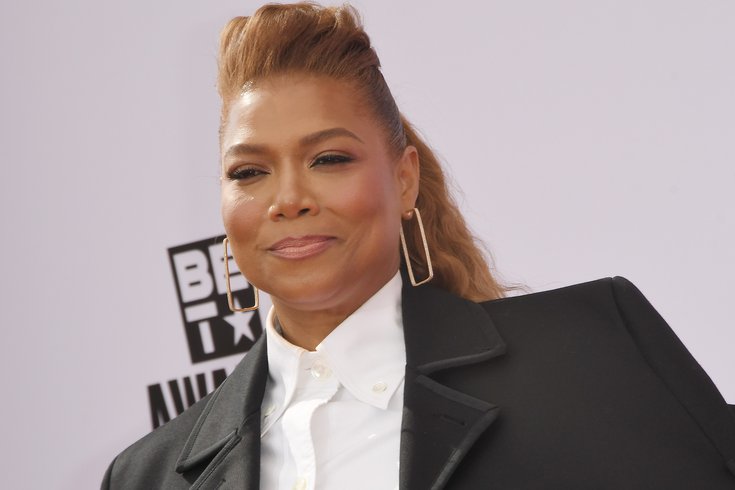 Queen Latifah appeared Tuesday on 'The Tonight Show Starring Jimmy Fallon,' where she talked glowingly about her experience starring alongside Adam Sandler in the upcoming Netflix basketball film 'Hustle' set in the Philadelphia region.

Anticipation over Adam Sandler's upcoming Netflix movie "Hustle" has increased in recent months after the actor and his production crew were spotted filming at various locations across the Philadelphia region.

One of the film's stars, Queen Latifah, appeared Tuesday on "The Tonight Show Starring Jimmy Fallon," where she talked about how "crazy" it was to work alongside Sandler.

The actress and musician said that filming "Hustle" with Sandler was a nice, relaxing change of pace from production for her crime drama television series "The Equalizer."

"[Sandler] is the best," Latifah told Fallon. "It was just so much fun working with him. He's carrying around a bucket of music, it's like this bucket box of sound. He's a sweetheart just having fun and just making everybody happy."

Latifah also talked a bit about her role in "Hustle." The New Jersey native will play Sandler's wife in the basketball film, which she said was a dream come true because she admitted to having a bit of a crush on him.

"I cannot wait for y'all to see [the film]," Latifah told Fallon.

"Hustle" stars Sandler as Stanley Beren, a struggling NBA scout who attempts to revive his career by bringing a troubled overseas prospect to the United States. The prospect is played by Boston Celtics forward Juancho Hernangomez.

Along with Sandler and Latifah, the film also stars Robert Duvall and Ben Foster. Sandler's Happy Madison Productions and LeBron James' SpringHill Company are co-producers on the project. Jeremiah Zagar, who comes from a family with several artistic connections to Philadelphia, will direct the film.

Sixers like Tobias Harris, Seth Curry, Tyrese Maxey and Matisse Thybulle, as well as head coach Doc Rivers, are all expected to make cameos after being spotted with Sandler's film crew at a South Philly basketball court in August. Philly native and Miami Heat guard Kyle Lowry is expected to make an appearance, too.

Sandler and the "Hustle" production crew have been spotted in the Delaware Valley several times over the past year. Filming has taken place in the Italian Market, Center City, North Philly and Manayunk, as well as in surrounding areas including Chester, Coatesville and Camden. The movie's casting team held tryouts this summer at the 76ers Fieldhouse in Wilmington to find extras for basketball scenes.

Just wrapped HUSTLE. Thank you Philadelphia and Majorca and all who worked on it. Had an incredible time with u. Love, Adam pic.twitter.com/bkHq4bbw78

Sandler has also been spotted several times enjoying the local dining scene, including a notable appearance at the popular Israeli restaurant Zahav in Old City in August.

The premiere date for "Hustle" on Netflix remains unknown at this time.