The upcoming Netflix movie has hit locations across the Delaware Valley 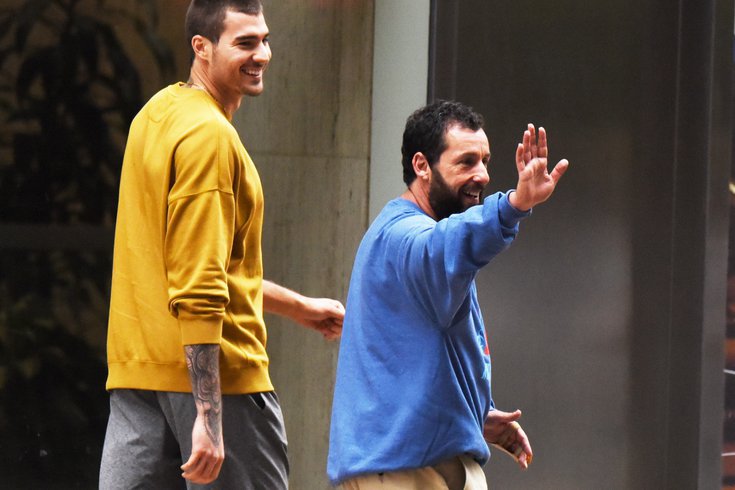 Adam Sandler and Juancho Hernangomez are pictured in Center City working on the Netflix movie 'Hustle' on Market Street on Tuesday, Oct. 13, 2020. The movie is produced by NBA star Lebron James and is being directed by Jeremiah Zagar, the son of the artist behind Philadelphia's Magic Gardens. It's the first major production to film in Philadelphia since the COVID 19 pandemic began last spring.

Ongoing production for Adam Sandler's upcoming Netflix film "Hustle" will shut down a few streets in Center City on Monday as the film crew continues to spotlight Philadelphia.

Parking is prohibited on the following streets until 10 p.m:

Vehicles parked in these locations during posted hours will be relocated.

The closures come after the "Hustle" production crew spent a portion of last week in Manayunk, where closures took place along Green Lane, Silverwood Street and Dupont Street over a three-day period.

"I love Philly," Sandler answered, according to 6ABC.

He later told a crowd, "I hope the parking is going OK."

Over the past year, filming for "Hustle" has taken place in Center City, the Italian Market, North Philadelphia, Chester, Coatesville and Camden. A tryout for extras also was held at the 76ers Fieldhouse in Wilmington, Delaware.

Earlier this month, Sandler was serenaded by students at La Salle University as he celebrated his 55th birthday. He shared the moment on Instagram.

"Hustle" will star Adam Sandler as Stanley Beren, a struggling NBA scout who attempts to revive his career by bringing a troubled overseas prospect to the United States. The prospect is played by Memphis Grizzlies forward Juancho Hernangomez, who will make his acting debut.

A release date for "Hustle" hasn't yet been set, but it represents another film project that will bring recognition to the Philadelphia area.