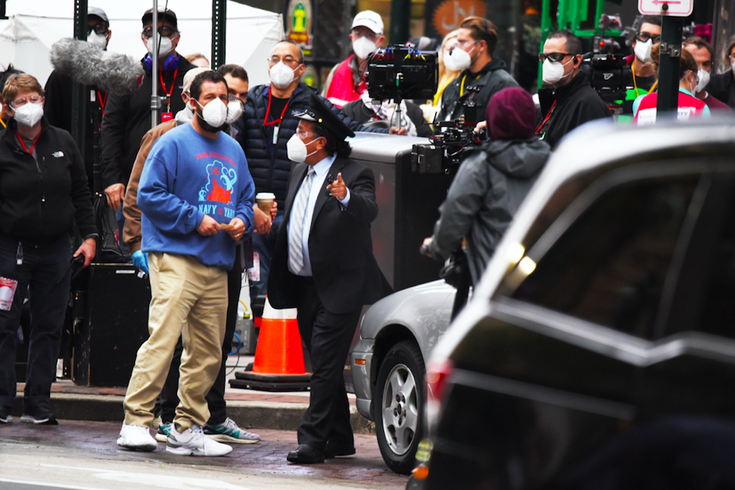 Adam Sandler has been in Philadelphia working on his upcoming Netflix movie 'Hustle.' Several members of the Philadelphia 76ers are expected to make cameos in the project.

The Philadelphia area's recent run in movies and TV has been a point of pride for the region, which has enjoyed the spotlight after hits like "Concrete Cowboy," "Mare of Easttown" and "Servant."

Another film project gaining steam over the past year has been "Hustle," a Netflix movie co-produced by Adam Sandler's Happy Madison production company and The SpringHill Company. The latter, which produced "Space Jam: A New Legacy," was founded by NBA superstar LeBron James and his close friend, Maverick Carter.

Sandler and the rest of the "Hustle" production crew have been in the Delaware Valley a few times in the past year, filming at locations in Philadelphia's Italian Market and Center City, as well as in surrounding areas including Chester, Coatesville and Camden. The movie's casting team held tryouts this summer at the 76ers Fieldhouse in Wilmington to find extras for basketball scenes.

This week, Sandler and the production crew were at a basketball court in South Philadelphia, where they were joined by Sixers coach Doc Rivers and players Tobias Harris, Seth Curry, Matisse Thybulle and Tyrese Maxey. A photo from the court showed Harris, and Sandler confirmed the cameos during an appearance on "The Dan Patrick Show" podcast.

"Yesterday, I did a scene with Doc Rivers, and a bunch of the Sixers were in there," Sandler said. "Tobias, Matisse, Seth Curry and Tyrese Maxey. It’s all nice guys."

"Hustle" will star Adam Sandler as Stanley Beren, a struggling NBA scout who attempts to revive his career by bring a troubled overseas prospect to the United States. The prospect is played by Memphis Grizzlies forward Juancho Hernangomez, who will make his acting debut.

Sixers fans will recall that Joel Embiid almost had Kevin Garnett's role in "Uncut Gems," but scheduling around the NBA season made it impossible for Embiid to pull off an entry into the acting world.

The role the Sixers players and Rivers will play in "Hustle" isn't clear, but it's probably safe to say they aren't a major part of the movie. They'll definitely drive more interest in the movie. Philly native and Miami Heat guard Kyle Lowry also is expected to make a cameo in the film.

A release date for "Hustle" hasn't yet been set, but it's another project to keep an eye on — especially after Sandler showed his range in a more dramatic role for "Uncut Gems."