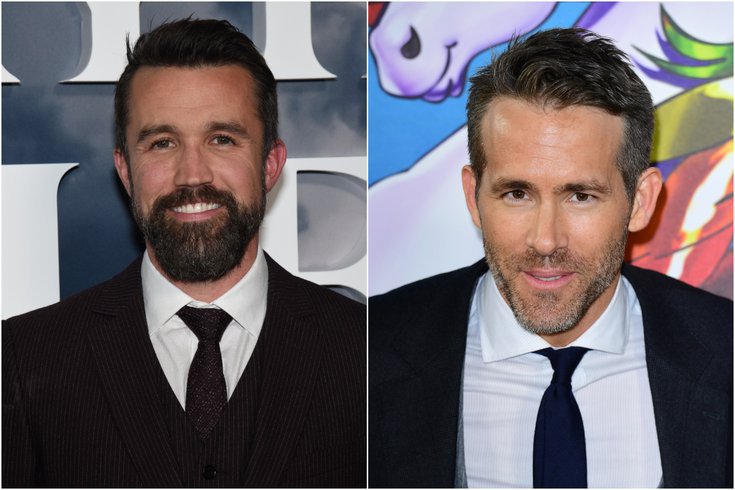 Rob McElhenney and Ryan Reynolds, owners of Wrexham AFC, issued a mock cease-and-desist letter to 'Ted Lasso' and Apple TV+ after shows latest episode included a joke about the actors' ownership of the Welsh soccer team. The creator and star of 'It's Always Sunny in Philadelphia' and Reynolds, who currently stars in 'Free Guy,' purchased Wrexham AFC late last year.

Actors Rob McElhenney and Ryan Reynolds will not tolerate their ownership Wrexham AFC being the punchline to a joke – at least not without a comedic retort of their own.

McElhenney and Reynolds issued a mock cease-and-desist letter to "Ted Lasso" and Apple TV+ after the critically-acclaimed show poked fun at the duo's ownership of the Welsh soccer team. McElhenney, a Philly native, tweeted a photo of letter on Saturday.

The creator and star of "It's Always Sunny in Philadelphia" and Reynolds, who currently stars in "Free Guy," purchased Wrexham AFC late last year.

The joke about their ownership of the team came during Season 2's fifth episode, which dropped Friday. Leslie Higgins, AFC Richmond's director of football operations, tells the club's owner Rebecca Welton that he received a call from McElhenney and Reynolds, but quips that he hasn't responded to them yet because he "can't tell if them buying (Wrexham) is a joke or not."

For those who have yet to watch, "Ted Lasso" stars Jason Sudeikis as a college football coach who is hired to run AFC Richmond, a fictional English football club. The show's first season earned 20 Emmy nominations.

But the show's popularity didn't spare it from the contrived ire of McElhenney and Reynolds. They printed the missive on letterhead that reads "from the desk of RR McReynolds," which is the official name of Wrexham AFC's ownership group.

It's full of references "Ted Lasso" fans will understand, as well as references McElhenney's Apple TV+ series "Mythic Quest" which he created with fellow "It's Always Sunny in Philadelphia" star and writer Charlie Day.

"It has come to our attention that in a recent episode of 'Ted Lasso,' our very real ownership of Wrexham AFC was called into question by an otherwise beloved character named 'Higgins,'" McElhenney and Reynolds write. "While we hold the incomparable Jeremy Swift in no ill regard and are honored to be mentioned on the platform that's brought us high-quality programming ranging from 'Mythic Quest' season one to 'Mythic Quest' season two, we must insist that you cease and desist from the casting of any doubt regarding our commitment to the club, the fans and the entire Wrexham community."

To avoid legal action AFC Richmond must send them two, large boxes of Lasso's famous biscuits – if you don't get the reference here, watch Season 1 of the show, it's worthwhile.

You left us no choice @AppleTVPlus @TedLasso pic.twitter.com/KSQ3ZswRAL

Apple TV+ responded to the notice, joking that its "team of 2,000 lawyers are furiously baking as we speak."

Thank you so much for your reasonable arbitration request, Rob. Our team of 2,000 lawyers are furiously baking as we speak... https://t.co/GMutZqLLFr

Founded in 1864, Wrexham AFC is the oldest club in Wales and third-oldest professional football association in the world. The club's home pitch, the Racecourse Ground, is the world's oldest international stadium that still hosts international games. Prior to MacElhenney and Reynolds taking it over, the club had been owned by fans since 2011.

The Wrexham AFC Red Dragons play in the National League, the fifth tier of the English football pyramid. It's the lowest tier the club has played in since they were first elected to the Football League in 1921. Wrexham AFC has won the Welsh Cup a record 23 times, but has not been a force in international soccer for decades.

The actors ownership of Wrexham AFC will be chronicled in a forthcoming FX documentary series titled "Welcome to Wrexham." The series has already been signed on for two seasons, but a release date remains unknown.

Despite being the butt of the joke on "Ted Lasso," McElhenney is trying to earn some support for Wrexham AFC among his "It's Always Sunny in Philadelphia" co-stars. In classic "Always Sunny" fashion, it appears that "The Gang" is sort of on board with the Red Dragons.