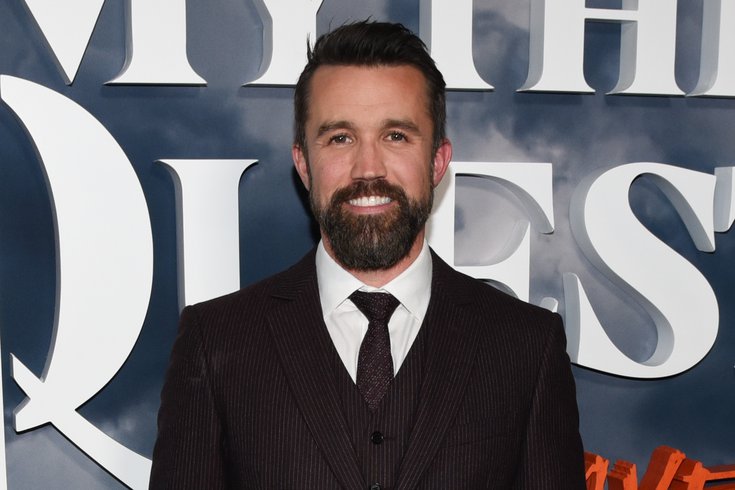 Rob McElhenney, creator of 'It's Always Sunny in Philadelphia' and 'Mythic Quest: Raven's Banquet,' joined friend and fellow actor Ryan Reynolds for an interview with Men's Health, where they talked about the aesthetics and pressures of masculinity.

Next to Christian Bale, few actors have shown the willingness and ability to transform their bodies as dramatically as Rob McElhenney.

Between seasons of "It's Always Sunny in Philadelphia," the series co-creator famously gained 52 pounds on a 5,000 calorie diet just to make a meta-argument about his character and the unrealistic way sitcom actors usually get better-looking as their shows progress.

McElhenney went on to lose all of that weight and become sculpturally fit in subsequent seasons. In the finale of season 13, McElhenney left audiences in awe with a beautiful dance sequence that stood for Mac coming out of the closet in the show.

All of this is to say that McElhenney has personally wrestled with some interesting questions about identity and social expectations, using his own body and creative work as experimental canvasses to scratch beneath the surface of an image-obsessed culture.

In the latest edition of Men's Health magazine, McElhenney joined forces with "Deadpool" star Ryan Reynolds to talk about masculinity, exercise, friendship, aging and validation. The two actors struck up a friendship that began on social media and recently led them to partner up in buying the Wrexham AFC soccer team, even though they both know very little about soccer.

McElhenney, 44, made a fascinating point to Reynolds about how he's been perceived since getting into great shape:

I’m sure you’ve experienced this, too, but the people who were most fascinated by my body when I was in great shape were dudes. Women could give two s**ts. In fact, my wife really was displeased with the way I looked, because she felt like I was trying too hard, and I was. I was! There’s this fascination that men want to look like that and men want to be that aesthetically pleasing to other men. I’m actually talking about straight men as much as men in the gay community. It’s interesting that it’s not based in sexuality or sex appeal and more about this body image that we’ve sort of grown accustomed to. It’s the thing people find fascinating, because it relates to their lives. So much of it is wrapped up in health, but also aesthetics and sex and all sorts of things that make us human, and it’s something we’re all grappling with in different ways every day.

McElhenney isn't kidding — one of the first people to compliment his ripped physique was friend and former Philadelphia Phillies star Chase Utley. Curiously, McElhenney speculated that his wife and "Always Sunny" co-star Kaitlin Olson preferred "Fat Mac" because his lifestyle was a bit looser. The so-called "Dad bod" comes with a certain ease and contentment, compared to the intensity of the workout warrior.

Reynolds then led the conversation toward the impact of a masculine pressure in Hollywood (and by extension, in the culture it serves) that remains as murky as it is taken for granted. McElhenney acknowledged that it's difficult to explore this issue in a serious way because the expectations on women, by comparison, are so heavily skewed that they need more urgent attention:

I don’t want to cry foul too much, because women have been held to a very difficult and specific standard for so long and continue to be, and men have had the benefit of not being held to such a stringent standard, aesthetically at least. However, I will say — and I hear this from a lot of men, and I think it’s a little bit less taboo to talk about — that men, too, are held to a standard of masculinity that’s impossible to live up to or is probably essentially unethical to live up to: that sort of quiet, masculine tough guy who’s both jacked and ready to throw down at any moment but also sensitive — but not too sensitive.

And aesthetically, the superhero stuff hasn’t helped. We now have this ideal of being the biggest dude or the most ripped guy in the room. Brad Pitt, for example, in Fight Club — that’s the body type that I hear more men talk about than anything else. But Brad Pitt in Fight Club is probably 150 pounds soaking wet — he’s just all sinewy muscle — and I bet if you stood next to him back in 1999, or whenever that movie was, he would seem frail, because the ideal body type now is f***ing jacked.

The problem with generalizing a conversation like this is that it tends to flatten the diversity of preferences people have, whether it's for the way they take care of themselves or for what they seek in others. Not everyone aspires to the same things, despite the overbearing presence of cultural norms around us. Not caring too much about them, or about the perception of defying them, isn't exactly a renegade philosophy to adopt in 2021, no matter who you are.

But McElhenney touches on a nuanced ideal that men have struggled to genuinely and compassionately articulate, thereby allowing masculinity to fester in what the general mood out there suggests is a toxic state. That lack of understanding makes the issue appear half-baked compared to critiques of other social constructs like feminine beauty, queerness or status as a function of wealth, race and ethnicity.

The difficult thing to reckon with is the idea that such a poorly defined, balance beam standard for men — rugged and semi-sensitive — is one that may well produce "essentially unethical men," in McElhenney's words. The actor didn't elaborate enough on this. Maybe he's suggesting there's a basic confusion of expected masculine roles always at play, which leads to conduct that falls short of a ridiculous ideal — one which sees strength and sensitivity as functional opposites to be counterbalanced, instead of two empowering qualities in a well-rounded man.

The aesthetics of the human body can often tell us a lot about what we wish to be, from physiques to the fashion choices that adorn them. This is how, in 2020 and 2021, one of the biggest touchpoints in our insecure conversation about masculinity is the Four Lads in Jeans meme.

Jamie, Alex, Kevin and Connor, the four 'lads in jeans' men who went viral after becoming a meme, spoke out about their experience on Good Morning Britain.https://t.co/GSJd8VUxRx

For a satirist like McElhenney, big issues like these are some of the purest fodder for "It's Always Sunny in Philadelphia" and his Apple TV series, "Mythic Quest," yet they also point increasingly to a public figure who recognizes their importance goes beyond the laughs. He may not be providing answers just yet, but he's offering a better way to talk about the questions.