Rob McElhenny, Kaitlin Olson are featured in the band's new single 'Follow You' 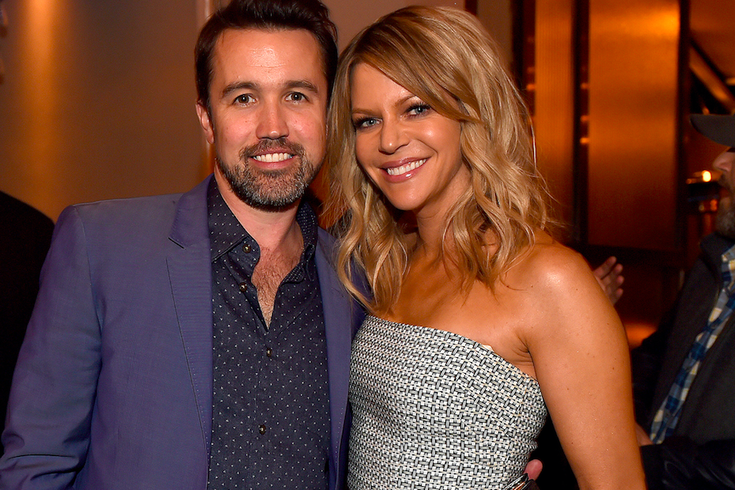 Rob McElhenney and Kaitlin Olson of 'It's Always Sunny in Philadelphia' appear in the new music video for Imagine Dragons' 'Follow You,' a single from their upcoming fifth studio album.

Lots of jokes are made at the expense of Imagine Dragons, who can be summed up neatly as the band you hear on your gym's playlist when your headphones die, or the band that comes on at a networking event for managers. They are Nickelback's torchbearers in the mainstream American rock landscape.

But they seem to have turned the corner of self-awareness, much like Nickelback's lead singer Chad Kroeger, who probably got paid handsomely to make fun of himself with that Google "Photograph" commercial.

Imagine Dragons released a music video this week with help from "It's Always Sunny in Philadelphia" stars Rob McElhenney and Kaitlin Olson. The husband-and-wife duo are featured in the band's video for "Follow You," which is about frontman Dan Reynolds' remarriage to his wife following a separation.

The video begins with Olson taking McElhenney to an empty theater, where she tells him she's arranged a private performance from his favorite band.

McElhenney thinks she must mean The Killers, but nope, she picked her own favorite band, Imagine Dragons.

McElhenney's disappointment morphs over the course of the video as he imagines himself to be one of the dragons, or something to that effect. He pulls all kinds of power moves on stage — in his mind, at least.

But as the song ends, the moment quickly fades and the couple gets up to leave.

"Awww, no, man, we don't want to hear anything else," McElhenney replies.

"Yeah, let's get out of here before they play 'Radioactive,'" Olson says.

Imagine Dragons has been teasing singles from their upcoming fifth studio album this month, and a little help from The Gang may refresh their brand.

As for "It's Always Sunny in Philadelphia," fans are eagerly awaiting the FXX sitcom's return for its 15th season.