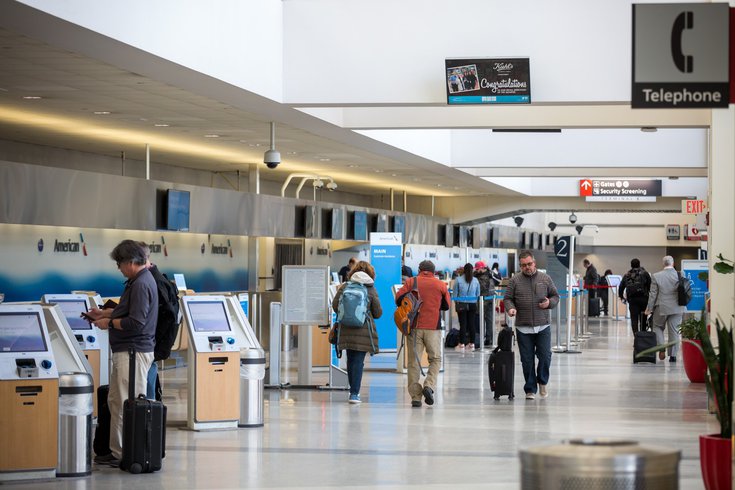 Thousands of employees at Philadelphia International Airport, ranging from baggage and freight handlers to wheelchair attendants and food service workers, will receive a minimum wage of $15.06 per hour beginning in 2022 and an additional $4.54 hourly wage supplement toward health insurance beginning in 2023.

Thousands of workers at Philadelphia International Airport are set to earn more money per hour.

Approved unanimously by City Council in June, the new law also guarantees workers an additional $4.54 hourly wage supplement toward health insurance and up to 56 hours of paid sick leave. Individuals who are covered by the measure hold positions ranging from baggage and freight handlers to food and retail workers, cabin cleaners and wheelchair attendants, among others.

Councilmember Kenyatta Johnson, the bill's primary sponsor, said most service workers at PHL currently make either $13.60 or $12.40 per hour. Most, he said, also do not have health insurance.

"The new PHL Prevailing Wage Law will not only make sure that the workers make a living wage but will assure they have meaningful access to health benefits," Johnson said. The airport is one of the biggest and most profitable airports in the country and the workers — many of whom make less than $30,000 a year in salary — shouldn’t have to worry that they could be bankrupted at any time by an illness or injury."

With small business owners who operate at the airport and the Pennsylvania Restaurant and Lodging Association voicing concerns about the financial impact of the COVID-19 pandemic, Johnson amended the bill before it was passed to delay the minimum wage requirement for restaurant and concession workers until the beginning of 2022. Those employees will also have to wait until July 2023 to receive their health insurance supplements.

A spokesperson for PHL told the Inquirer that the airport plans to study "the potential business impacts" of the legislation, and will share results in the coming months. A spokesperson for the Kenney administration said, "we believe that in time, this legislation will make all of us better off."

"Airport workers — many of whom are Black and brown and were on the front lines of the COVID-19 pandemic’s economic and health impacts — deserve to earn fair, living wages to support their families," spokesperson Kevin Lessard told the Inquirer. "At the same time, we understand the pressures that airport businesses, especially small concessionaires, are under given the challenging economic environment and the pandemic’s effect on travel."

Johnson's legislation was backed by two unions: 32BJ SEIU, which represents more than 2,500 service workers at PHL, and UNITE HERE, which represents roughly 1,200 individuals who work in catering and concessions at the airport.

The largest carrier at PHL, American Airlines, pushed back against the measure. According to a report from the Inquirer, American's executive vice president for corporate affairs told Johnson in a letter dated June 16 that the bill "will have a negative impact on service levels, especially international service levels, in Philadelphia."

American Airlines had not returned PhillyVoice's request for comment on the new law as of Sunday evening. In the spring, the airline laid off 28 of its employees at PHL and furloughed more than 1,000 after passenger volume at the airport fell about 70% in 2020 compared to 2019.