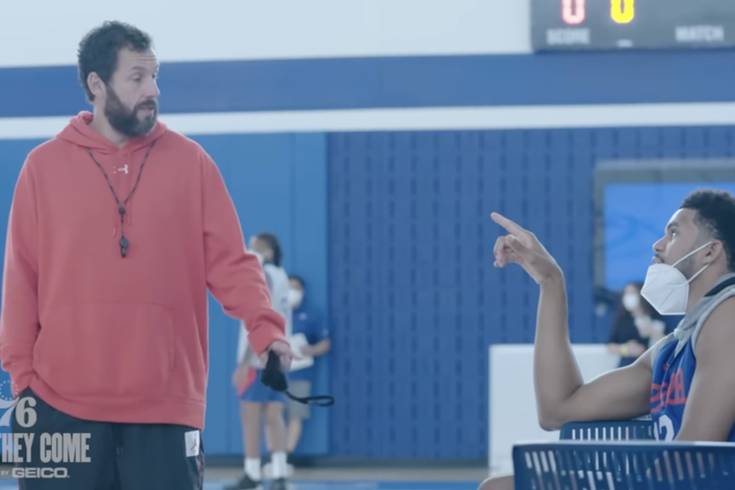 Adam Sandler and Sixers star Tobias Harris talk on the set of 'Hustle,' Netflix's basketball drama that was filmed in Philadelphia.

The Netflix debut of Adam Sandler's star-studded NBA drama "Hustle" has been met with an overwhelmingly positive reception in the days since the film's premiere.

The movie, filmed in Philadelphia and co-produced by LeBron James' The SpringHill Co., centers on Sandler as basketball scout Stanley Sugerman, who works for an alternate version of the 76ers. Sugerman encounters an intriguing prospect in Spain, street ball player Bo Cruz (played by Juancho Hernangómez), and the two men train relentlessly to build Cruz into NBA form.

The Sixers played a significant part in the making of "Hustle," opening the team's facilities and permitting several players to participate in the project. On Friday, the team released some behind the scenes footage from the film's production, including interviews with Sandler and the three current Sixers who appeared in "Hustle" — Tobias Harris, Tyrese Maxey and Matisse Thybulle.

"He loves playing basketball. He's good," Harris said. "He's aggressive. That's one thing I'll say. He plays hard and he's a competitor, but he's a good player. He's at the top of like, celebrities. I would put him up there."

Sandler said he and Harris struck up a friendship during the making of "Hustle," and he gets excited when they have a chance to chat.

Thybulle said that everything about the production of "Hustle" was made comfortable by the way Sandler oversaw the project.

"To be in one of his movies, kind of as a guest, was an intimidating opportunity, but a cool one," Thybulle said. "And (Sandler) made it fun and laid back. He didn't make it too stressful or anything like that. I think that allowed a lot of us to feel comfortable just being ourselves on set."

Maxey, who became a budding NBA star during the making of "Hustle," said he appreciated the little things he learned about filmmaking. The project enabled him to dust off some old acting skills.

"I did theater when I was in middle school and high school, so that's the only preparation I had for a moment like this," Maxey said. "Everybody wanted to be there. It wasn't like it was forced. I think I enjoyed the process of it, just everything that goes into it that you don't see behind the scenes when you're at the movies or you're at home watching."

Sandler grew up a New York Knicks fan, but said he's always like the Sixers and will now be rooting for them after working so closely with the team on "Hustle."

"Now that I'm buddies with you guys, of course I'll be pulling for you," Sandler told the Sixers trio.