I canceled my trip to Florida for my unborn baby

Until three months ago, I thought I had a realistic view of risk. I was the type who laughed at people buying milk and bread before a two-inch snowfall and scoffed at those feverishly following every update about the pope’s impending impact on Philly traffic.

And then I got pregnant.

From that moment – a moment I had been looking forward to most of my life – I began to view my body as a device to protect and carry my baby, with my main job being to mitigate avoidable dangers.

Still, when one of my best girlfriends asked me to go to her bachelorette party in Key West, I said yes.

Sure, I wouldn’t be the life of the party, being the only sober one. But anyone who’s been to a few, or especially had one of their own, you know that these gatherings are milestone moments in people’s lives. So I really wanted to be there for her.

My doctors said flying was fine, I planned on being careful while I was there, and I was looking forward to it.

And then I heard about the Zika virus.

You’ve definitely read the headlines about the mosquito-borne illness that’s been raging through Central and South America and has been linked to physical and neurological birth defects in fetuses, namely babies born with abnormally small heads, or microcephaly.

You may have also heard that the virus has a high probability of making its way to Florida. If that happens, it will almost certainly make its way to Key West, the southernmost point of the United States.

In a parenting podcast I subscribe to, a leading OB-GYN confirmed she believes it’s almost certain to reach the United States at some point in the future.

And yes, while it has not been locally transmitted in the United States yet, there are concerns about the likelihood “that Florida's native mosquitoes may bite someone who is infected, suck the virus up into their bodies, and then spread it to other people.” 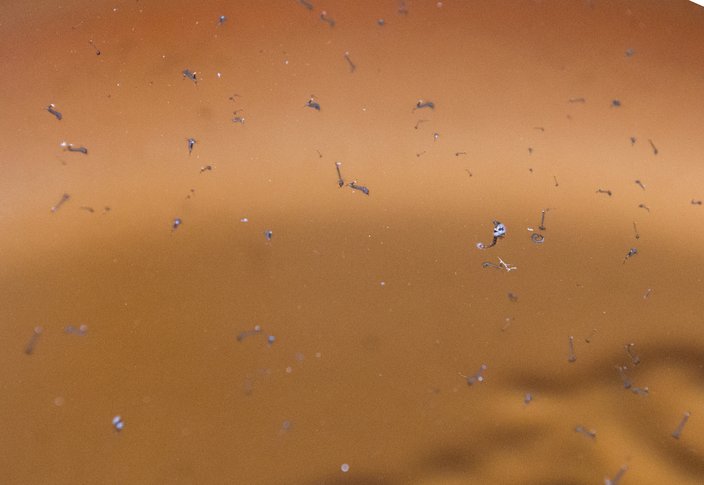 Mosquito larvae swim in a flower pot filled with rain water in the backyard of a home, Friday, Feb. 5, 2016, in Boca Raton, Fla. Florida's warm climate, year-round mosquitoes and revolving door of international travelers make it vulnerable to the Zika virus.

The probability that I’d become the first, or one of the first, people bitten by a virus-carrying mosquito in this country sounds undoubtedly slim.

As my husband rationally put it (and for the record, we decided together that I not go) the act of getting into my car each day and driving to my office poses a higher risk to our unborn child than spending a weekend away in a place with no current exposure to the virus.

Were we being irrationally reactionary? Would this be something we’d look back on as a silly, media-driven scare? Or, would it be absolutely insane to go to the southernmost point in the United States, where they have to do everything possible to keep mosquitoes away, when the only people who really have to be worried about the virus are those who are pregnant?

Over the past few weeks, I've been constantly monitoring updates, while also mentally packing bathing suits. I was reading headlines and looking at alarming photos of babies born with small heads, while trying to focus on enjoying the 70-degree weather with my friends.

At this point, my doctors had echoed advice from the Centers for Disease Control and Prevention. They recommended I wear long clothing and insect repellent as much as possible, just to be safe. But as the situation developed, I was getting mixed advice from medical professionals.

I spoke with a nurse who again recited the CDC recommendation, but then she added, from a mother to a mother, that she wouldn’t go.

My cousin, a neonatal intensive-care unit nurse at the Children’s Hospital of Philadelphia and mother of two children under age 5, said the same thing – she’d cancel – adding to her reply, “Welcome to motherhood.”

And another family member in a medical profession even went as far as to advise not traveling to the southern United States, in general.

Over several nights, my husband and I had conversations on whether to cancel my trip.

Were we being irrationally reactionary? Would this be something we’d look back on as a silly, media-driven scare? Or, would it be absolutely insane to go to the Florida Keys, where they have to do everything possible to keep mosquitoes away, when the only people who really have to be worried about the virus are those who are pregnant?

Ultimately, just worrying about it was ruining the lead-up to the trip, my concerns would make the trip itself stressful, and then even after the trip we’d have to further ensure I hadn't been bitten and not realize it. (God forbid the thought, then, if I were infected.)

Maybe from a probability standpoint, it was still relatively very safe to go, but it was a clear loss from an emotional standpoint.

The decision: I canceled the trip this past weekend. I was happy to pay the cancellation fee, but to my pleasant surprise, Spirit Airlines gave me a full refund upon learning it was based on Zika concerns.

The result: I’m bummed I can’t make the trip, and I’ll have to make it up to my friend, but I honestly feel so much lighter. Well, figuratively at least.

Elisa Lala is a PhillyVoice.com staffer.

If anyone else is going through a similar situation, I’d love to discuss! Please let me know what you think, and tell me your story in the comments.