IBX Foundation dispatches 'Someone You Know' campaign to Capitol Hill

Ambassadors head to Washington to fight stigma of addiction 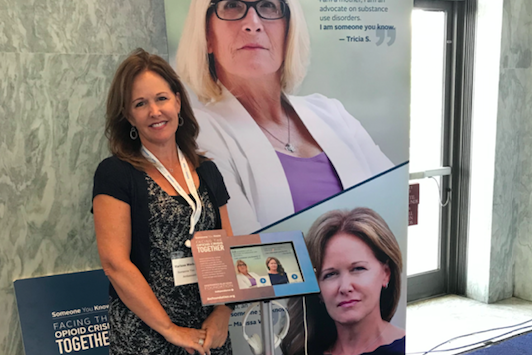 Marissa Wadsworth, an ambassador for the Independence Blue Cross Foundation's 'Someone You Know Campaign' lost her son, T.J. to opioid addiction in 2014. On Thursday, she joined her fellow ambassadors in Washington to speak out against the stigma surrounding addiction.

Marissa Wadsworth went to Washington on Thursday to deliver a message to lawmakers that she first began spreading several months after the death of her son, T.J., to a heroin overdose.

She wants people to know that opioid addiction can happen to anyone.

"T.J. didn't have addiction in the family," Wadsworth said. "Those pills, they get a hold of you and turn your life and your family's life upside down."

Wadsworth was among 17 ambassadors from the "Someone You Know" campaign launched by the Independence Blue Cross Foundation to meet with politicians on Capitol Hill. The public health awareness campaign aims to reduce the stigma of opioid addiction by sharing stories of people in recovery and family members affected by substance abuse.

Former Pennsylvania Gov. Tom Ridge and U.S. Rep. Madeleine Dean joined politicians who met with the group at the Rayburn House Office Building. There, the campaign set up kiosks to tell the various stories of the ambassadors.

"It's inspirational to see all these other people making it (in recovery), and the politicians showing up, that they would let us come," Wadsworth said. "I think everyone is doing the best they can. The problem is just so big that any footsteps in the right direction is good."

Wadsworth, of Lower Providence, Montgomery County, first began telling her story in hopes of preventing other teenagers and young adults from becoming addicted to opioids. Working with an organization called Narcotics Overdose Prevention and Education, Wadsworth visited schools to share her son's story.

T.J. Wadsworth had used alcohol and marijuana recreationally during high school, his mother said. During his senior year, someone offered him a pill while he was intoxicated. He took it, leading to an opioid addiction that claimed his life at age 21 – four days after he left rehab.

Life will never be the same, Wadsworth said. But she wants to help save the lives of others.

"To hear how many more people it's affecting, it just doesn't seem to be getting any better," Wadsworth said of the opioid epidemic. "I know a lot of changes have happened since my son died five years ago, but the numbers are just growing. I don't know what the answer is, but at least people are talking about it."

The "Someone You Know" ambassadors sought to highlight the IBX Foundation's efforts to reduce the stigma of addiction. Earlier this year, the campaign launched a podcast featuring conversations with the ambassadors. It has since been heard by people in at least 25 states and five countries.

The campaign is part of the IBX Foundation's Supporting Treatment and Overdose Prevention initiative, which has awarded more than $2 million to organizations fighting the epidemic in the Philadelphia region. Last year, the foundation held a national conference on stigma attended by 600 public health leaders, including U.S. Surgeon General Dr. Jerome Adams.

Wadsworth said the politicians who met with the ambassadors were well-versed on the subject.

"They agree that this is an epidemic and that it needs to be fought," Wadsworth said. "The stigma –  that seems to be the main message here. Don't be ashamed because everybody is either dealing with it or knows someone, or has a family member (who is)."