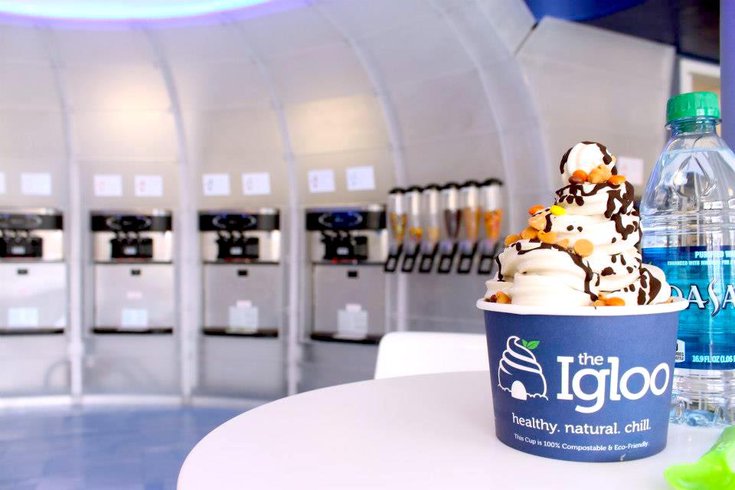 The Igloo reopened it's shop near South Street earlier in January.

January is an odd time to start a business selling ice cream, but when frozen treats and ice cream shop, The Igloo, reopened earlier this month, it wasn't the beginning. Don't call it a comeback, either.

As they tell it, it's a homecoming as the shop at 23rd and South streets opens its doors again after a winter break used to rebrand, embrace their hometown roots, and promote offerings made possible thanks to their new friends at Franklin Fountain, the iconic Old City ice cream shop.

Did we mention the commissioned brand artwork created by a local LGBTQ creative? And the resent-ridden origin story behind their rebrand?

"People support local in this city," cofounder Zac Parker said. "People from Philly like people from Philly. And we want to make people understand that we," Parker pauses, "are Philadelphia."

He's not wrong. As he rattled off the various concoctions on the shop's menu, he gets to water ice and glides over "wooder" with a reflexive ease only a native Philadelphian would. Along with that water ice, The Igloo offers frozen custard, ice cream, self serve, and, as Parker says, "pretty much every frozen treat so everyone's gonna be happy."

In the shop at 23rd and South, above a mural of a polar bear family, the wall reads, "The Igloo is Philadelphia's home for all frozen desserts. We are locally created and owned…There's no place like home!" The partnership with Franklin Fountain, where they're scooping the Old City mainstays flavors and cross promoting, adds further Philly flavor.

Above the new, expanded menu, it insists, "There's something for everyone – just like Philly!" 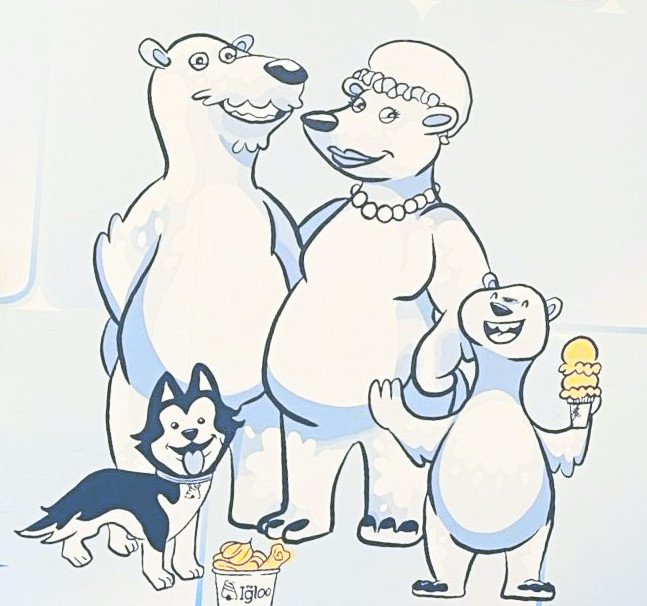 Also like Philly? The resentment that fueled the rebrand in the first place.

As Parker tells it, last year a new to Philly competitor pulled into the loading zone The Igloo uses for deliveries. The competitor had a mobile popup to promote their own brick and mortar location.

"They gave free ice cream to our customers for about four hours," Parker says. You can imagine this story being told on a barstool, in a barbershop, or in a hair salon, like most good local stories. "It made us stop and think, 'How can somebody from New York do that in our own backyard – to us?" His words get tighter, his voice gets quieter, "In our home?'"

The episode made them seethe, even if it was unintentional, but like most pain, something creative happened. Why not let it rip on the Philly thing? After all, they were a locally owned and operated business. Not only that, but they're local and LGBTQ owned.


"As an LGBTQ business, there are elements we get to add (without being posery)," Parker explains. It's not about the business as much as it is the community, though.

"We've hosted same sex engagement parties, fundraisers for gender affirmation surgeries (and) partnered with organizations. We always try to make sure the community knows we're part of it," he adds.

The new brand imagery, which includes a polar bear family outside an igloo, of course, wasn't commissioned through an ad agency, though. Parker asked people on social media and elsewhere for leads on any artists who could do it – and they kept the work inside the LGBTQ community, with local artist Franky Rowles.

The local family identity is indeed a departure from the original concept. That idea had its roots in fro yo's moment about a decade ago – with a dash of the Gayborhood's gym culture, once epitomized in the iconic, and now demolished, 12th Street Gym, right up the street from The Igloo's original location.

"We both are into maintaining our gym bodies," Parker laughs touching on the original concept he and business partner Bill Chlebowski imagined. "But we noticed all these families and kids coming into the shop. They weren't as excited about the health concept of frozen yogurt, so we started transitioning our product line to meet the customers."

He's quick to add that they still offer healthier options like they did originally. It's just now they offer something for everyone, including people who are on their cheat days or people who don't think of cheat days at all.

As to that competitor, Parker doesn't wish them any ill will. But he doesn't exactly send them Christmas cards, either.

"Philadelphia is a gritty city," he says. "I think we reward hard work and the people of this city…want to work, work hard, and earn rewards."

When asked about The Igloo's rewards, Parker goes straight to a clear favorite of his.

"Our Cinnamon Toast Crunch soft-serve," Parker excitedly replies. "We make it in-house by soaking the cereal overnight in cream. Then, we extract the cream and mix it into our ice cream. So it's really the flavor."

The Igloo also has a Fishtown store at 1514 Frankford Ave. That shop reopens on Feb. 11.

Josh Kruger is an award-winning journalist in Philadelphia whose work appears locally and nationally, online and in print. He has been published in newspapers, magazines and LGBTQ and HIV community publications. He brings his unique lived experiences of homelessness, HIV, addiction, and local government service to his writing and commentary.