Inspired by a saint, Delco man ministers to homeless – with ladle 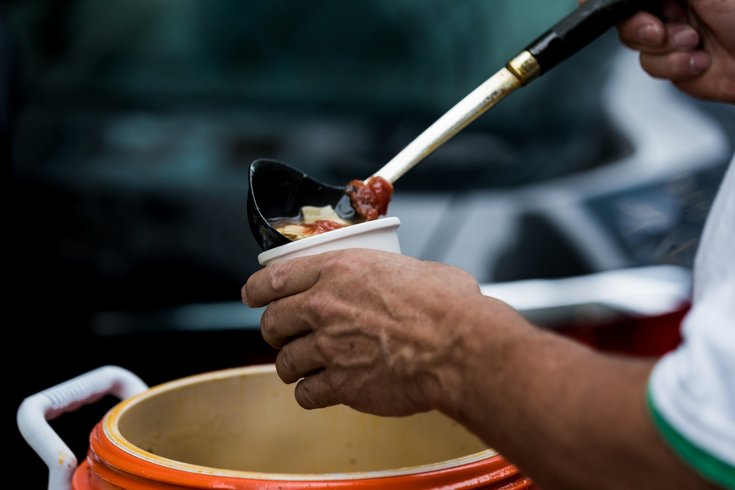 John McGlinn of Media, Delaware County, ladles soup into a cup during a street-side breakfast in Center City Philadelphia on Sunday, July 23, 2017. McGlinn and his band of volunteers feed 100-plus homeless in the colder months and about half that when it is warmer.

A devotee of Saint Teresa of Calcutta started his own outreach, “The Soup Ministry,” with initial guidance from sisters of her order, the Missionaries of Charity of Chester.

“It’s because of the sisters,” McGlinn said of his soup mission work. “They wanted an outreach in Philadelphia and I drove into the city with three sisters and visited three sites – Logan Circle, Jefferson Station and Suburban Station – where homeless could be found. After looking around and saying this would be great, they said, ‘Why don’t you do it John, we’ll help you?’ and that’s how it started.”

Since November, McGlinn and two helpers, Chuck Schroeder, 47, a homeless man from Upper Darby, and Joe Molinari, 61, of Ridley Park, an electrical parts salesman, drive into the city each week, set up a make-shift cafeteria and dish it out till they run out.

In the colder months McGlinn estimates feeding 100-plus homeless and about half that number during warm months.

After hearing about his mission, the ministry expanded when others stepped up and offered to make soup and sandwiches, including a now famous Cora’s Friendship Soup.

“I make soup because he’s feeding the homeless,” said Cora Hunter of Middletown, a retired nurse, who signed on to the effort in the spring. “My husband Tom told me about John, so I make 16 quarts every other week because this is something I can do. I like to cook and I could do that.”

Two other women he met through acquaintances working at the Delaware County Courthouse make soup for the mission, too.

“They wanted to do something to help the poor,” McGlinn said. “It’s funny how they all intertwined. It’s a nice outreach.

“I made beef noodle soup this week because the woman who usually does is on vacation," he said. "Elwyn (Behavioral Center) residents make peanut butter and jelly sandwiches and Adam Talbot, a pharmacist in Aston, makes turkey and cheese hoagies once a month. The homeless love the sandwiches and I flavor the coffee.

“If nobody is making sandwiches I buy the lunch meat and make sandwiches." 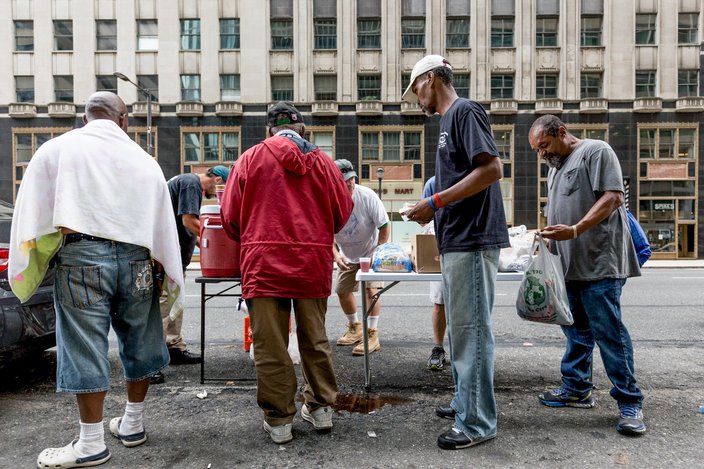 The street-side Sunday breakfast has developed a following. As John McGlinn and his helpers arrived on Sunday morning, they were greeted by several waiting regulars.

McGlinn estimates he spends about $50 every week for supplies, coffee, creamers, sugar and paper products. Last year, the St. Vincent de Paul Society donated $300 for the ministry and the sisters used to hand over gift cards they received to help defray the costs.

Panera donates bread and pastries and some stores give him a discount.

“We were talking and after telling me what he does I said, that’s something I want to do,” Molinari said. “We talked about how the good Lord brings people together. I think it’s wonderful to feed the homeless. I like seeing the people and I like seeing their eyes. We’re the arms and extension of Jesus. When I see them I see Jesus and when you get an opportunity to help, you help. This is one of the most rewarding things I’ve ever done.

“John is a giving person, a very caring person walking with the Lord," he added. "He’s doing what we’re supposed to be doing.”

Schroeder met McGlinn in a coffee shop in Media and has helped with the mission since its inception.

“I try to help out doing what I can,” Schroeder said. “You don’t have to be Catholic to help. It all comes back to Christ. John says the Blessed Mother is overlooking us and it’s a beautiful thing.” 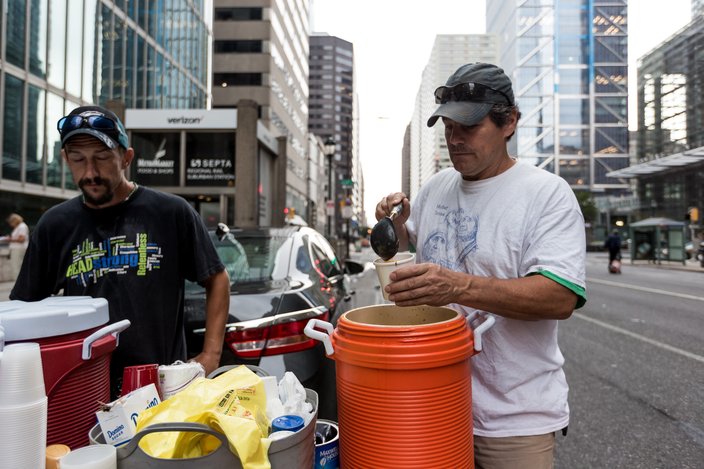 Chuck Schroeder, left, travels to the city from Upper Darby to help John McGlinn, right, passing out food and drink to the homeless at 17th and JFK in Center City Philadelphia on Sunday, July 23, 2017. 'John says the Blessed Mother is overlooking us,' says Schroeder, 'and it’s a beautiful thing.'

'THIS IS A GOOD THING'

Doug Campbell, 36, homeless on and off the past three years, says he heard about the soup and coffee being served last year.

“I was sitting on a bench (inside the Jefferson Station) and a man came down and let us know they were serving breakfast,” Campbell said. “There were a lot of people sleeping down there at the time. There are soup kitchens twice a week and other places the rest of the week, but not a lot on Sundays.”

Pat Adams, 62, lives at the Philadelphia Nursing Home and took the bus in her wheelchair to get to 17th Street for breakfast.

“This is a good thing,” Adams said. “I like it here. They have sandwiches and soup. It’s delicious, better than Subway’s. I’ve been down on my luck many years ... I like this one.”

Through his mission McGlinn knows many of the homeless by name and makes special stops on the way to feed homeless panhandling on corners and staying under bridges.

McGlinn was a chemical operator employed at Honeywell for 26 years until he was laid off three years ago. 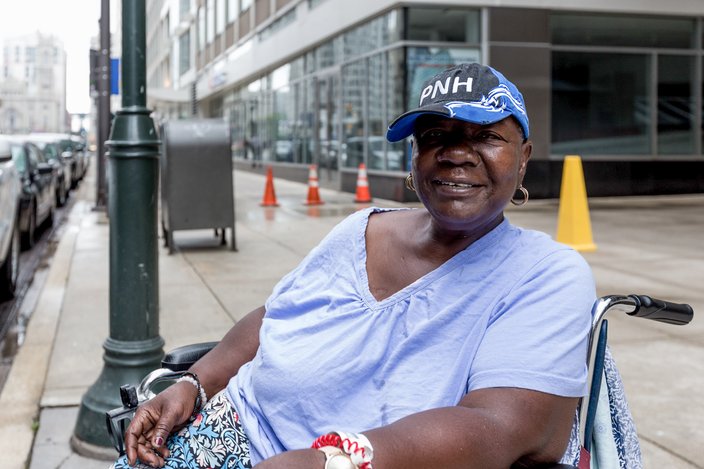 Patricia Adams, 62, says she routinely stops at the corner during her Sunday commute. 'This is a good thing,' Adams said of the breakfast stop. 'I like it here. They have sandwiches and soup. It’s delicious, better than Subway’s.'

Now working as maintenance man for a car wash company and Nativity BVM Church in Media, he uses the kitchen in the annex of the church to make the coffee and heat up the soup early Sunday morning.

McGlinn started reading about Mother Teresa about 20 years ago and wanted to help. He paid a visit to the Missionaries of Charity House in Chester.

“I was interested in her spirituality,” McGlinn said. “I knocked on their door with a casserole and offered to help. They asked me if I could fix something for them and I’ve been associated with them ever since. I’ve been through seven superiors.”

Through the order he has traveled to many of their houses throughout the world including New York City, Washington, D.C., Baltimore, Jamaica, St. Croix, Haiti and Calcutta.

McGlinn stayed at the Sisters' house in Rome last year when Mother Teresa was canonized a saint.