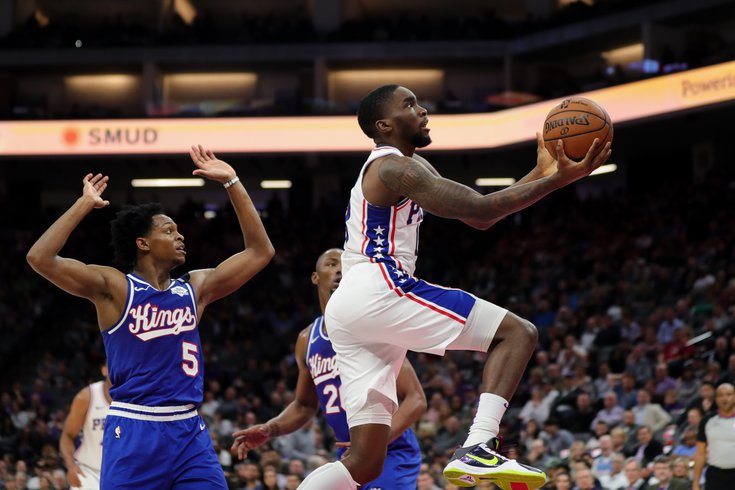 Shake Milton had another impressive showing with the Sixers shorthanded Thursday night.

The Sixers picked up their first road win since late January on Thursday night, outpacing the Kings 125-108 behind big nights from Al Horford and Tobias Harris.

• Nobody needed to have a get right game more than Horford, whose struggles on this road trip (and this entire season) have been well-documented. He did exactly what the team must have hoped for and came out firing, but more importantly, the shots actually started dropping for the big guy.

Making a couple of early open threes seemed to get Horford going, and his trigger from beyond the arc was as quick as it has been in a while even when the looks weren't the best and the shots didn't go down. I'm not advocating for an avalanche of threes from Horford, but he has looked gun shy at times this season, and they can't afford to have him psych himself out of taking good looks the offense is creating for him. The Sixers made it a point to get him early touches on the low block as well, and as always, there is something to be said for getting guys to their spots to start the game and reaping the benefits everywhere else as the game rolls along.

The little stuff that has been missing for Horford this season came through on Thursday. There was a play in the second half where he sniffed out De'Aaron Fox trying to bully Raul Neto, helped enough to force a kick out to Kent Bazemore, rotated back to Bazemore and then offered a great contest of a shot the Kings' wing would miss. He was locked in on both ends, and that helped set the tone for a team desperately in need of a road win.

It's not like Horford suddenly forgot how to play basketball once he put pen to paper last summer. They need more games like these, especially when he's in a smaller role with the key figures back in the mix in the near future. He may not be the same nightly force he was during his prime, but Horford has plenty to offer. He was a +41 on Thursday, and that felt representative of his play.

• One of the beneficiaries of Horford's hot start and big night was the other big-money man for Philadelphia. With Sacramento more keyed in on Horford as a jump-shooter, Harris had a lot of room to operate in the mid-post and the Kings did absolutely nothing to slow him down all night long.

The space that has been opened up in the absence of Simmons and Embiid has allowed the Harris/Horford pairing to show what they can do with some more room. When Harris wasn't isolating and going to work on his own, he was an active cutter for Horford to hit on the move, and when your big is dragging the rim protector away from the basket, it's easy work once the pass is made.

He led the way in the scoring department for Philly, dropping 28 in a comfortable road win.

• It is hard to overstate how good Shake Milton has been on this road trip for Philadelphia. After he had the game of his career against the L.A. Clippers on Sunday, Milton appeared on ESPN's The Jump the next day, quite the star turn for a guy who was out of the rotation entirely for a while. But instead of letting the moment go to his head or change how he has played, Milton has continued delivering the same results in a similar role in the nights that followed, and that is a testament to both his game and his demeanor.

I'm sure a lot of people are waiting for Milton to regress as a shooter, and that will come at some point, but Milton has the look and the indicators of a guy who should be able to settle into a long-term role in Philadelphia. He's getting (and making) quality looks, keeping the offense moving by attacking closeouts and hitting the open guy, and his success as a driver has been much improved. Milton had some defensive lapses against Fox on Thursday, but he didn't play passive against Sacramento's young point guard, giving him a taste of his own medicine with some crafty work in the paint on the other end.

An underrated part of his success to date — Milton's confidence attacking the rim with either hand. For a right-handed player, he has absolutely no reservations about going to his left, and his length gives him a chance to finish over or around would-be shot-blockers.

At this point, I think it is obvious you have to roll with him as the fifth man in the starting group when they're fully healthy. He brings essential skills to the table on offense.

• After a first half where the wheels came off when he was in the game and a shaky start to his second-half minutes, I was about ready to stick a fork in Raul Neto for the season. But once Brett Brown put him alongside a more talented unit to close out the third quarter, Neto helped lead the Sixers on a run that effectively killed off the game, and reinforces that he is not the toxic player some seem to believe he is.

If you ask Neto to create too much on his own, he's going to struggle, and that was what inspired many to pine for Trey Burke in the middle of the season. When he's just a release valve, Neto has been rather good as a catch-and-shoot guy this year, and he has more than enough to get by as a secondary creator. Defensively, he had a somewhat rough night and Fox had a rare stretch of bully ball shooting over the smaller guard in the mid-post area. But hey, can't win 'em all.

• Everyone knows what Alec Burks can do offensively because when he has the ball in his hands he shows little interest in anything other than finding the rim and letting it rip. There is value in that on this team. And when the Sixers needed someone to create some cushion in the second half, Burks was in the thick of the action, attacking the Kings at all three levels and providing the spark Elton Brand must have envisioned when he dealt for him.

• Mike Scott has been one of the unsung heroes of the road trip, with Brown turning to him to anchor small-ball lineups early and often — mostly because Norvel Pelle has been brutal whenever he has hit the floor on the West Coast. Philadelphia hasn't exactly been elite on defense when they've gone to these lineups, but it is not because of a lack of effort from Scott.

He must know that he is in a fight for a spot in the playoff rotation, because Scott's energy on both ends has been terrific. He's diving for loose balls, crashing the glass hard, and doing his best to protect the rim, even if his size leaves him unable to do much to imitate center skills. By playing him at center, Brown has also opened up the floor for the entire team, and perhaps we will see more of these looks down the stretch with a healthier group. Good on him for stepping up in a time of need for the team.

• Take no road wins for granted with this group. The Kings are not a great team, but they have been pretty damn good recently as they fight for a spot at the bottom of the Western Conference playoff race, and the Sixers came in hungry to get a victory.

• Listen, I know the Kings' fourth-quarter push was annoying, but negativity has been given the night off. They got the job done on the road and I am going to leave it at that.

• Being shorthanded forces coaches into lots of lineup combinations they don't necessarily want to run out there. It shouldn't make you abandon a very basic basketball principle of having at least one of your best available players on the floor at all times.

Someone forgot to tell Brett Brown that on Thursday night. The Sixers surged to a 30-18 lead in the first quarter, and out of a timeout Brown called himself, they rolled out a lineup of Raul Neto, Alec Burks, Furkan Korkmaz, Glenn Robinson III, and Norvel Pelle. That is not a group that should be out there fending for themselves at absolutely any time. Two of those guys shouldn't really be seeing the floor at all, particularly as they gear up for the playoffs.

It should surprise no one that the Kings went on a 12-0 run and tied the game, bringing the game back into contested territory. These are the sort of coaching errors there are just no excuses for — it was doomed to fail from the start and produced the results every sensible person expected.