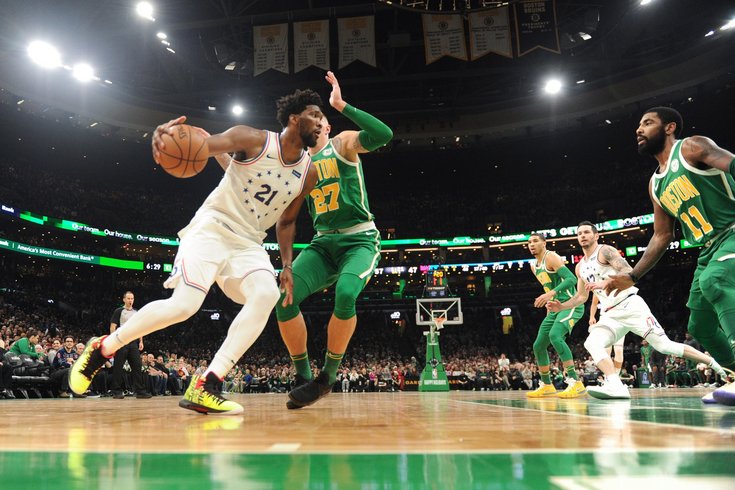 The Sixers had every opportunity to get a tough win on the road on Christmas, and they wilted in front of the Celtics once again. Dress it up however you want, and Kyrie Irving had a spectacular game, but the symptoms of the 121-114 loss are all too familiar for Philadelphia against Boston.

Here's what I saw on Tuesday night, with some great individual performances ultimately not mattering.

• The Celtics have been quite an issue for Joel Embiid over the last few years, with the combination of Al Horford and Aron Baynes making life tough for him as he goes to work in the post. With Baynes on the shelf due to an injury, it was up to Horford to take on the challenge by himself, and he had it going early on.

The key for Embiid against Boston is making sure he doesn't try to go into hero mode too often. Letting him go to work in the post is one thing, but Boston is too good and too connected on defense for him to get tunnel vision. He did a good job of balancing priorities on Tuesday, feeling doubles when they came and attacking Horford when they didn't.

It also helps when he can hit shots from deep. I know a lot of people get upset when they see Embiid shooting threes, but it's a necessity for him in today's NBA. I know the percentages are what they are, but given his success at the free-throw line and how open he often is, I think over time he is going to turn into a more respectable outside shooter, and all these discussions will be moot.

Philadelphia needs him to be close to his best self to win this matchup. For most of Tuesday's game, he was exactly that, shutting down the paint on defense and abusing Boston inside on the other end.

• If not for JJ Redick's hot start, the Sixers might have been down by 15+ at halftime in Boston. And while it's great to see him getting on a roll, it's also a bit scary when you consider his place in the team moving forward. What do the Sixers do if they lose Redick this summer?

That may be a problem for another day, but it's the sort of thing that you have to think about when one of your core players has no offensive isolation game to speak of.

• With Kyrie Irving roasting Philadelphia on defense in the first quarter, you would have expected Jimmy Butler to be the answer for the Sixers at the other end. He was pretty miserable early on, unfortunately, starting the game 1/7 with a handful of misses that never really had a chance.

The good news? He shrugged off the tough start and kept getting better as the game rolled on, popping up just about everywhere when they needed it.

When Boston tossed up lazy entry passes, Butler swooped in like a free safety to knock them down or grab them to start fast breaks. He made calculated risks on double teams, and though many of them failed to produce a turnover, they did disrupt Boston's flow and stagnate their possessions. And Butler was the only guy to really bother Irving, which he did on some key possessions in the fourth quarter.

There are stretches of games where Butler just owns the gym on both ends of the floor. The Sixers already have one of those guys in Embiid, and it sure makes life easier when they don't have to rely on Embiid to do that for 48 minutes.

• I maintain that Wilson Chandler can be a useful role player on this team if they can simply find a better fifth starter to push him down the rotation. He had some huge moments in this game, he's just a little overextended right now.

• The second half of that game is why you're never going to see T.J. McConnell fall out of Brett Brown's good graces. All his limitations were on display, with the Celtics hunting him on defense and sagging off of him on offense.

And yet, McConnell kept popping up and making plays along the margins to keep the Sixers chugging along. He came up with a bunch of tough defensive rebounds in the second half, something the Sixers struggled with in the first 24 minutes, and with the defense playing as well as it was that was all they really needed.

• Boston is not exactly a juggernaut of an offensive team, but that was a pretty excellent defensive performance from the Sixers overall. Timely switches, good help defense, some individual brilliance from Butler and Embiid, you get the picture.

• Kyrie Irving picking up multiple offensive rebounds in the first quarter — with Philadelphia's starters on the floor, no less — is completely inexcusable. Brett Brown called a timeout when Irving picked up the second one and scored, and it was certainly justified. The Sixers were almost all standing flat-footed when Irving swooped in, losing out on the play because of nothing but effort. Brutal sequence.

• Ben Simmons has to figure out a way to make a bigger impact in this matchup. There is no way for the Sixers (at least a realistic way) to win against this team across a seven-game series if he is just floating through stretches of the game as a passenger.

This is where the lack of a jumper deserves to be mentioned over and over again. The Celtics do not care about him on the perimeter. It's on him to turn that against them, and he is a long way from doing that right now. You can only impact the game so much in transition.

Embiid was barely able to get the ball in overtime, and a lot of it comes down to how the Celtics can tilt their defense because of where Simmons hangs out on the court. The problem in this matchup is Simmons, and it's not going away.

• On a related note with Simmons: if he's not going to be any closer to hurting the Celtics in the halfcourt, perhaps the Sixers should consider ramping up (or at least changing) his defensive responsibilities. They have four players they call point guards on the roster, and the Sixers don't have a chance in hell defending point guards on other teams.

Simmons is one of the league's most versatile defenders, and the Sixers highlight that fact whenever they can. If that's the case, why not use him more on someone like Kyrie Irving? It's not like there's an argument that he's carrying some huge offensive load against Boston and needs to save his energy for that end.

My pal Cole Zwicker made a good point in the middle of the game — if Simmons isn't helping in this situation, you're not getting any of the value you should by playing him on a bad shooter like Smart:

The entire point of Simmons guarding Smart is so he can help on plays like this pic.twitter.com/hpOzDxKOOH

I get that it's not ideal to have someone his size running around screens and doing the things you have to do as a point-guard defender. But they need to get plus-value out of him in some form or fashion. If they can't get that from one of their core pieces against one of the teams that will compete for supremacy in the East moving forward, they need to question the viability of their future.

• When Mike Muscala is bad, boy, is he bad. I would have liked to see if Jonah Bolden could offer the Sixers anything on Tuesday evening, because Muscala was missing an assortment of open shots and offering very little on defense.

• Redick got a decent look at the end of regulation, but I was a little puzzled at Butler not getting the ball with a chance to win the game. Having him stand in the corner? Meh.

• The Sixers' bench did not make a single shot in the first half. This group isn't good enough, and they need guys who can defend.

I have no idea what Elton Brand is capable of or what his actual priorities are beyond what he says during media availability. But I'll say this — if the Sixers don't bring in someone who can defend between now and the end of the season, there will be earnest questions about whether the front office even sees what their problems are.