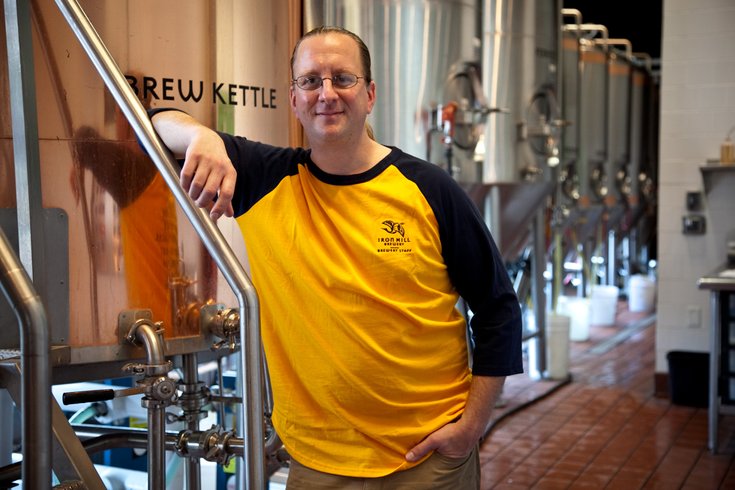 Friday, Jan. 16, the Iron Hill Brewery & Restaurant in Chestnut Hill is releasing a special brew. At the start of each year, head brewer Chris "Lappy" LaPierre creates a new beer he has never made before and releases it to awaiting craft brew lovers. This year, Lappy has created his own take on a Belgian farmhouse ale.

This hoppy American Saison is light and bright, with an earthy, fruity character. Though Lappy has brewed Saisons before, he hadn't yet done an American one, which led him to this year's recipe.

"The thing that's difficult about this project is that there aren't a ton of styles that I haven't brewed before. I've been brewing for about 15 years now," Lappy said.

What makes this Saison so American is the hops Lappy used: Cascade, Amarillo and El Dorado hops from Washington. A touch of Saaz hops from the Czech Republic also were used to remain true to Saison style, which often uses European hops.

The American hops and the yeast used for the brew give off hints of peach and orange and the spicy character typical of Saisons. The Saison style and the ability to hop-up the beer made this brew the perfect choice for Lappy.

"Saisons, in general, are kind of close to my heart, and I, like most brewers, particularly like my hops, so combining the two of them is a lot of fun," he said.

Not into beer? Well, the aforementioned brewer's jargon means one thing: "Lappy New Beer" 2015 is actually the perfect brew for non-beer drinkers. Saisons, Lappy said, are "very diplomatic for people that are beer neophytes, because they’re so fruity."

"If you think about it, people who drink, if they don’t drink beer, are usually drinking something that’s made with fruit, mixed with fruit, or flavored to taste like fruit, whether it’s wine or mixed drinks or flavored vodka," Lappy said.

Saisons like this are also perfect for pairing with food. They're light in body (translation: it won't weigh you down while you eat) but mega-flavorful (translation: you'll be able to taste it through your meal).

As for what to eat with your beer at Iron Hill, Lappy and chef Jared Cannon suggest the Grilled Chicken and Red Quinoa Salad, Barbecue Glazed Baby Back Ribs and Chipotle Pork Taco from the menu. The salad includes mandarin oranges with a vanilla-orange dressing, while the Saison works well with the taco's sweet glaze. As for the smoky ribs, "The fruit notes also work well with smoky characters," Lappy said.

King of the Hill Rewards Club members (Iron Hill's loyalty program) have another reason to attend Friday's release: Raffles for membership renewals and referral memberships will be awarded during the night.