The show's next season will also include a film noir episode, a global warming episode, and laser tag 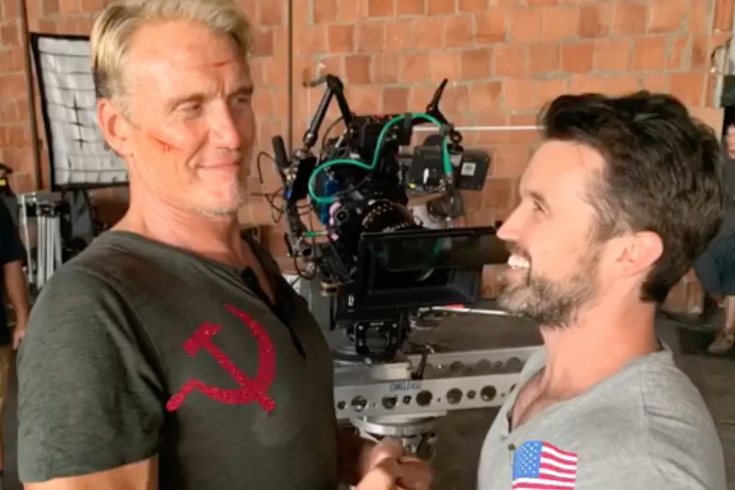 Rob McElhenney posted an Instagram with "Rocky IV" actor Dolph Lundgren in late July. McElhenney and the cast of "It's Always Sunny in Philadelphia" recently revealed that Lundgren will make an appearance during the show's 14th season.

If it feels like we've been waiting for the 14th season of "It's Always Sunny in Philadelphia" forever, it's probably because the cast has been doling out teaser info like breadcrumbs for months.

But in a new interview session during the Television Critics Association's Summer Press Tour, Rob McElhenney and the rest of the show's core cast finally talked concrete details: they unveiled four (!) different episode plot points on Wednesday, and also noted that Dolph Lundgren, of "Rocky IV" fame, will fittingly make an appearance on the Philly-themed show.

Here are the main details, straight from the cast, according to Deadline:

"During the session, it is revealed that the gang will continue to have off-center stories including an appearance by Dolph Lundgren as John Thundergun, a film noir episode, a story about global warming, a Waiting For Godot-themed laser tag episode and an episode where the gang puts their apartments on AirBnB in an effort to find love — which will be one of two episodes directed by Howerton."

It sounds like McElhenney wasn't kidding when he said the show was "getting weird".

How exactly Lundgren's Thundergun character will fit in to the story is unclear, though it wouldn't be surprising if the character is tangentially related to the Season 7 episode about the movie "Thunder Gun Express", which a Philly police officer tells the gang is "the best movie he's ever seen".

McElhenney also said Wednesday that his character, Mac, might end up finding a boyfriend through the Airbnb episode — "Maybe," McElhenney said — and he noted that while Mac's character arc hit a new level during his coming-out episode at the end of Season 13, he's "pretty much exactly the same.

"Our characters might change," McElhenney said, "but they don't evolve. He's not a better person."

That, of course, like everything else the cast detailed on Wednesday, is probably music to fans' ears.