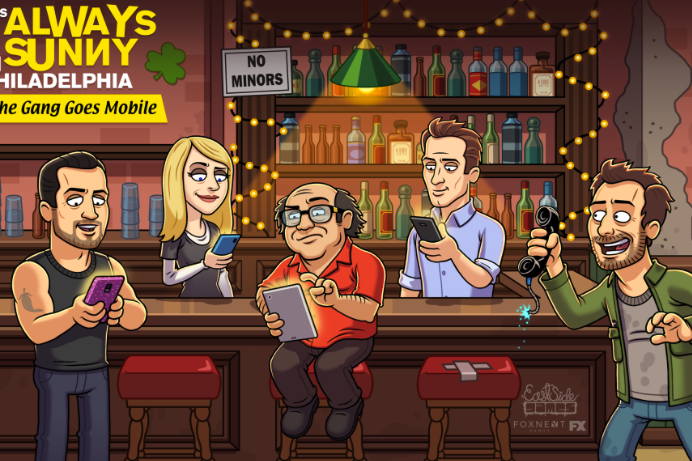 "It's Always Sunny in Philadelphia: The Gang Goes Mobile" debuts in 2018.

Not that any of us are lacking in tried-and-true ways to kill time, but boredom is about to become much more curable with the upcoming release of "It's Always Sunny in Philadelphia: The Gang Goes Mobile."

A partnership between FoxNext Games and East Side Games will bring us the first game dedicated to Philadelphia's finest miscreants some time later this year, the companies said in a statement.

“At FoxNext Games, we take pride in selecting the best studio partners to bring our games to life, and East Side Games' reputation of creating deep, dynamic mobile worlds made them the perfect match to transform It's Always Sunny in Philadelphia into a one-of-a-kind gaming experience that extends the show narrative," said Rick Phillips, President of licensing and publishing at FoxNext Games.

The premise for the game actually sounds more developed than the handful of clumsy laughs you might expect.

When Frank comes into some dirty money, he recruits Dennis, Dee and Mac to concoct schemes to launder it, naturally leading the three of them to bicker over who's got the best plan. Charlie is tasked with devising a way to protect the clean money from the feds.

The game is being planned for release on iOS and Android, but no date has been set beyond some time later this year.

Season 13 of "It's Always Sunny in Philadelphia" is set to debut on FXX on Sept. 5.

You can learn more about the mobile game and subscribe to receive updates here.