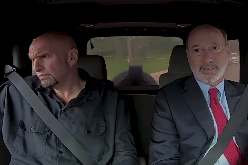 Braddock Mayor John Fetterman has always been characterized as unconventional candidate: The tattooed Harvard grad and middle-class champion who might as well be Pennsylvania's own Incredible Hulk.

When that sense of novelty becomes your selling point, you might as well take it to the bank—or maybe the Jos. A. Bank, or something.

They're off to a brilliant start.

Governor Wolf released a campaign ad on Wednesday afternoon that shrewdly riffs on the long-running FXX series, "It's Always Sunny in Philadelphia."

For all his wit and charm, Fetterman was in dire need of a neck tie.

A recent poll from Franklin & Marshall College found that Wolf held leads of at least 17 percent over all three potential Republican candidates in November's election.