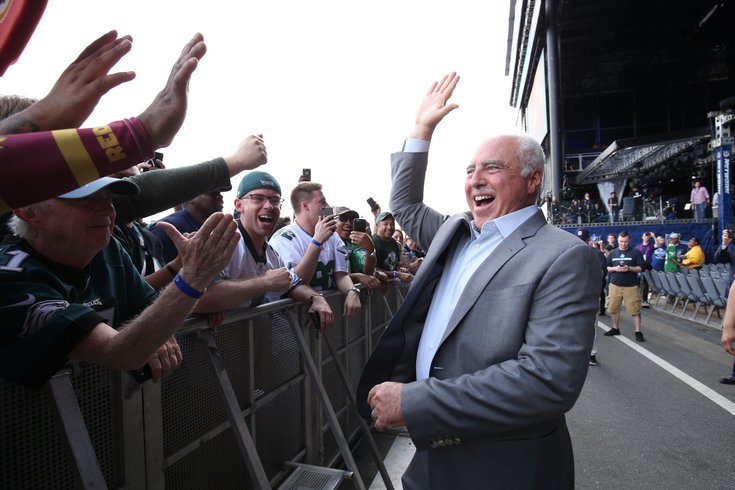 This is probably how excited Jeffrey Lurie would be if the NFL allowed teams to use more than one color helmet.

In his yearly press conference at the NFL Owners Meetings, Jeffrey Lurie fielded his yearly question about whether or not the team will occasionally wear kelly green jerseys.

And the answer remains the same — Not yet, but it’s not without effort from the Eagles to make it happen, per Jeffrey Lurie.

"I was just dealing with this yesterday," Lurie said. "I don't know if I mentioned this last year, but the whole key is that we want a Kelly green helmet to go with the Kelly green jerseys. We're trying to get the league to allow a second helmet. That's where it's at, so they very much know we want this and we want it badly, and we're waiting."

Lurie previously said that the hope was that the Eagles could wear Kelly green jerseys by the 2018 season. While he wouldn't rule that out, it seems unlikely.

"I don't know," he said. "As I said, I was on it yesterday, and I'm trying to make progress, and we don't have a game for half a year, so you never know."

Lurie was reluctant to reveal exactly who is thrwarting the Eagles' efforts to add a second color, or the exact objections as to why it's an issue.

"I don't know what entity of the league (is disallowing a second helmet), but in the end it's probably the commissioner. They have to decide if they want to go with a plan to be a two-helmet plan for the NFL, and that's not what we do now. It's a one-helmet league, so there's ramifications in that, I suppose. But they know with the Eagles, it's important to us. We really want to be able to have Kelly green jerseys at times, and to make it look really right, you should have matching helmets.

"You'd have to research with (the NFL) on (their objections). There are a lot teams that don't want that to happen, maybe. Some teams really want it to happen. There are some complications to it, so I'll just leave them to work it out."

So, for now, the NFL remains a "one-helmet league."