After Philly's elimination from the playoffs, it's easy to look back with rose-colored glasses. Just don't get it twisted 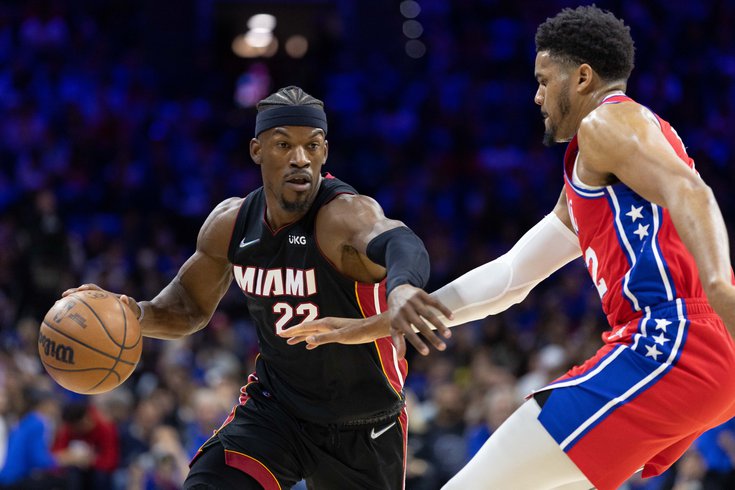 Beyond hindsight, there isn't really a good argument to be made for the Sixers failing to retain Heat star Jimmy Butler during the 2019 offseason. Even attempting to point to his chippy personality falls apart when you compare Butler to Ben Simmons, who the Sixers chose to keep instead. At least Butler plays – and plays fearlessly – despite sometimes threatening to fight his head coach.

Philadelphia's ugly playoff elimination on Thursday night, the end result of two straight disastrous games, naturally is generating a fresh round of existential panic about whether the Sixers actually have a window to contend for a championship – or if things will just look like this every postseason.

In Butler's postgame interview on the court, he toyed with Sixers fans by repeating his love and respect for Joel Embiid, adding that he wished he could still be on Embiid's team.

Jimmy Butler just said he wishes he was still on Joel Embiid’s team and he loves him. Wow.

And then, as Butler walked down the tunnel at the Wells Fargo Center, he took a shot at Sixers management by slighting Tobias Harris, another one of the guys the team kept instead of him.

"Tobias Harris over me?" — Jimmy Butler after eliminating Philly 😳

As much as Sixers fans may be tempted to gasp at Butler's twisting of the knife, as some fans have put it, this is just Jimmy being a menace. He's a great player, and brutally honest, but it verges on unsportsmanlike pettiness at times. To think that there wouldn't have been a meltdown – or multiple – at some point in the last few seasons if Butler had stayed here is naive.

Butler has already spoken about what played into him leaving Philadelphia during a podcast with JJ Redick, and new reporting from ESPN's Ramona Shelburne now says the Sixers basically viewed the decision as a choice between Butler and Ben Simmons, who turned out to be a train wreck. Butler insisted to Redick that he's not hard to work with, but the evidence has always been that he won't suffer people he judges to be fools, even if he could persuade them to embrace his logic in a more congenial way.

Would the Sixers be better positioned for title contention with Embiid and Butler as their centerpieces? Objectively, yes. Even that requires hindsight about how the team would have been built in the years after the Game 7 loss in Toronto, though. It's fine to engage in that criticism, and given the enormity of James Harden's future in Philadelphia, it's necessary in order to figure out where the Sixers should go from here. But doing so on account of Butler's needling just feeds his ego, nothing else.

If Butler had really wanted to be a long-term Sixer alongside Embiid, it's hard to believe he didn't have opportunities to manage relationships and communicate his frustrations in ways that could have persuaded Elton Brand and company to make signing him the team's top priority. The Sixers deserve blame for not seeing it was the right move fully on their own, but Butler's comment about Harris makes clear what it is that sometimes makes him a difficult person.

He doesn't care about being disrespectful to prove a point, and may not know how to do so without wrecking important relationships.

Maybe that fiery attitude is part of what makes Butler a great player and 'a winner' – we'll see – especially when the chips are down. For all of Harris' flaws – he is not in Butler's league – he is a great team player and the sort of guy who could totally be another future former Sixer (Andre Iguodala, Jrue Holiday) who ends up on a championship team, if it doesn't happen here. Why does Butler need to kick Harris when he's down?

Sixers fans need space to cope with the latest playoff failure – and by all means, do so. Falling prey to Jimmy Butler's chirping is understandable. Go ahead and root for him and the Heat over the Celtics or Bucks. Just don't pretend everything would have been sunshine and rainbows with him in Philadelphia, or that he didn't have any role or will in skipping town.

Joel Embiid last night called it a "mistake" for the Sixers not to keep Jimmy Butler, a feeling that's been obvious considering their close friendship. At the same time, Embiid routinely shies away – at least in public – from speculating about the team's roster construction. He's not the GM or the president, he says, and fair enough, but it may be time for Embiid to pipe up a bit more about what's really going to help him lead the team to a title in one piece.