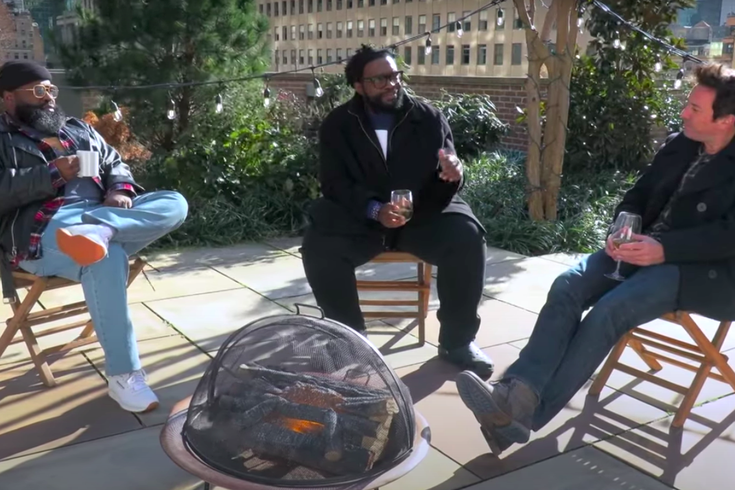 The Tonight Show with Jimmy Fallon/YouTube

Jimmy Fallon and The Roots teamed up for another Pennsylvania-themed bit this week, poking fun at West Reading native Taylor Swift's 2020 album "folklore."

The documentary focused on Swift's spontaneous creation of "folklore" in quarantine," praising the singer's turn to an indie-folk style with a focus on song-writing. It also gave a spotlight to album collaborators Jack Antonoff of Bleachers and Aaron Dessner of The National.

In Fallon's mockumentary, Black Thought and Questlove of The Roots play roles similar to Antonoff and Dessner, helping Fallon produce an off-the-cuff album during quarantine.

"A lot of the themes in my songs are hard to talk about," Fallon tells the two members of The Roots. "But I know other people are probably going through the same things, so maybe the music will resonate with them."

The three shown reflecting on the song-writing process in a seemingly serious fashion – that is, until you hear the songs, titled "I peed my pants in an applebees," "song about milk" and "sourdough heart." Like Swift's song titles, they're all in lowercase.

For the finale, another famous collaborator – Chris Martin of Coldplay – makes an appearance on the track "fuzzy wuzzy," where the "Yellow" singer harmonizes with Fallon on groundbreaking lines like "Fuzzy Wuzzy was a bear, Fuzzy Wuzzy had no hair, Fuzzy Wuzzy wasn't very fuzzy was he."

Watch the full video below.