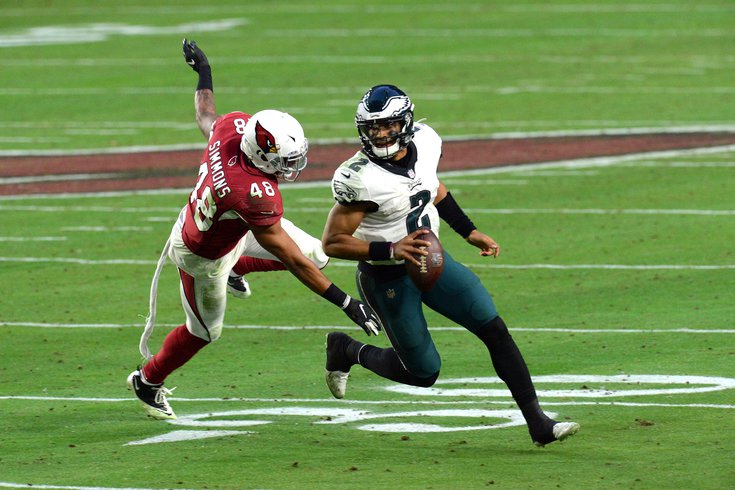 Jalen Hurts broke out in his second NFL start Sunday.

You can continue to debate whether Carson Wentz was the problem with the Eagles' offense.

While you're stuck in the mud with that, however, the solution was revealed in the desert when Jalen Hurts kept the Eagles in an old-fashioned shootout, something that would have been inconceivable even a month ago.

Pre-Hurts, Doug Pederson’s offense was simply incapable of standing in the middle of the ring and throwing haymakers with a 526-yard performance fueled by playmakers like Kyler Murray and DeAndre Hopkins. Rebounding from the adversity of a 16-0 deficit against such an offensive powerhouse would have been a laughable prediction.

But that’s exactly what happened on Sunday when Hurts generated 401 yards by himself in his second professional start — 338 passing with three touchdowns and another 63 on the ground with score No. 4.

The Eagles ultimately lost 33-26, of course, but were still throwing bombs into the waning seconds, nearly giving Pederson the difficult decision of going for the win or trying to force overtime with backup holder Zach Ertz, forced into unfamiliar territory after a Cam Johnston concussion.

A brilliant seam pass to Dallas Goedert was broken up at the last second by Byron Murphy, however, and a sequel was also nixed by the Cardinals before two Hail Marys on the final drive had the locals reaching for their oxygen tanks.

It’s stipulated that there are no moral victories in the NFL and zero style points but Hurts' performance is as close as you could get to such a thing.

The last thing Hurts wanted to hear was how impressive it was that he kept things close against Murray, his predecessor at Oklahoma.

“We left money on the table,” Hurts assessed. “[We] missed opportunities and [had] self-inflicted wounds. I could care less to hear any of the young stuff, second-start stuff, rookie stuff. We have a standard we want to play to.

“I personally have a standard I want to play to."

It's a high standard. One that will have Hurts beating himself up over being sacked six times, including two late in the game, and taking a safety that gave Arizona its first two points.

Many watching the broadcast locally were annoyed by the delivery of analyst Aqib Talib, ignoring the substance of the former All-Pro cornerback’s quick identification of coverages and responsibilities each player has in certain circumstances. It was a Tony Romo-level X’s and O’s performance punctuated with a hundred uses of the word “man” as Talib's tagline.

The point, though, is that Talib knows a thing or two about quarterbacks in this league and he was raving throughout the broadcast when it came to Hurts, his demeanor, and the rookie's playmaking ability.

Talib wasn’t on an island either. Former Eagles like Torrey Smith, Chris Long, and Mike Wallace took to social media to marvel at Hurts’ effectiveness.

“I think I hate losing more than I love to win,” Hurts surmised. “... Those things that you’re applauding me for were not enough. [Losing] is not a great feeling but it’s a learning lesson.”

Hopefully, the Eagles have learned their own lesson.

Embracing a solution is only difficult when you fail to acknowledge a problem.