Jonas Brothers to receive star on Hollywood Walk of Fame

The ceremony celebrating the New Jersey pop rockers will be held Monday afternoon. It can be streamed live online 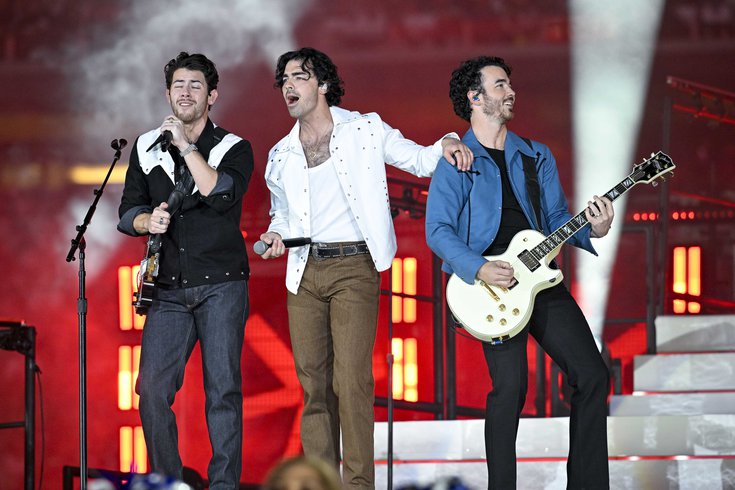 The Jonas Brothers are being honored with a star on the Hollywood Walk of Fame on Monday, Jan. 30. The ceremony can be streamed on the Walk of Fame's website.

This isn't an "S.O.S." — A pop rock band that hails from New Jersey will receive one of the entertainment industry's top honors.

The Jonas Brothers, the family band featuring Nick, Joe and Kevin Jonas, are being honored Monday with a star on the Hollywood Walk of Fame. The group will be awarded a star in the Recording category.

Fans can stream the Hollywood Boulevard ceremony live on the Walk of Fame website at 2:30 p.m. The event will be hosted by Lupita Sanchez Cornejo, chair of the Hollywood Chamber of Commerce, with guest speakers to be announced.

The Jonas Brothers will receive the 2,745th star on the Hollywood Walk of Fame, which has been hosted by the Hollywood Chamber of Commerce since 1960. This year's honorees have included Billy Idol, also in the Recording category, and Michael Strahan, who accepted the first star in the Sports Entertainment category.

The Jonas Brothers revealed the news Tuesday on Instagram.

"Such a honor to be getting a star on the (Hollywood Walk of Fame)!" the group wrote in the post. "We can't thank you all enough for the endless support."

The Jonas Brothers were raised in Wyckoff, Bergen County, and are still often in New Jersey — Kevin was spotted on a family vacation last summer in Ocean City. The brothers formed their pop rock band in 2005 and skyrocketed to fame with appearances on the Disney Channel, including the 2008 movie "Camp Rock," and hit songs like "S.O.S." and "Burnin' Up."

After a less-than-amicable breakup in 2013 to pursue solo projects, the brothers reunited for the 2019 album "Happiness Begins," featuring hit single "Sucker." The song became the band's first No. 1 single on the Billboard Hot 100. Their early journey, painful split and highly-anticipated reunion were documented in the 2019 documentary "Chasing Happiness." Their comeback won them three Billboard Music Awards and an MTV Video Music Award, as well as Grammy Award and American Music Award nominations

In 2019, the Jonas Brothers embarked on their worldwide "Happiness Begins" tour, which featured stops in Philadelphia and Atlantic City. The band's "Remember This" tour, which included a show in Camden, started in 2021, and the group also has a Las Vegas residency.

All three brothers are now husbands and fathers, and each continue to pursue projects on the side. Kevin hosts the ABC reality series "Claim to Fame," which has been renewed for a second season, with youngest brother (and non-bandmate) Frankie. Joe makes music with his dance rock band DNCE and appeared in Sony Pictures' "Devotion." Nick is set to produce and star in Amazon Studios' upcoming film "Foreign Relations."

Despite their many solo projects and endeavors as a band, the brothers found time to complete a new album. The unnamed album is expected in September, and earlier this month Nick confirmed there will be another tour coming in 2023.