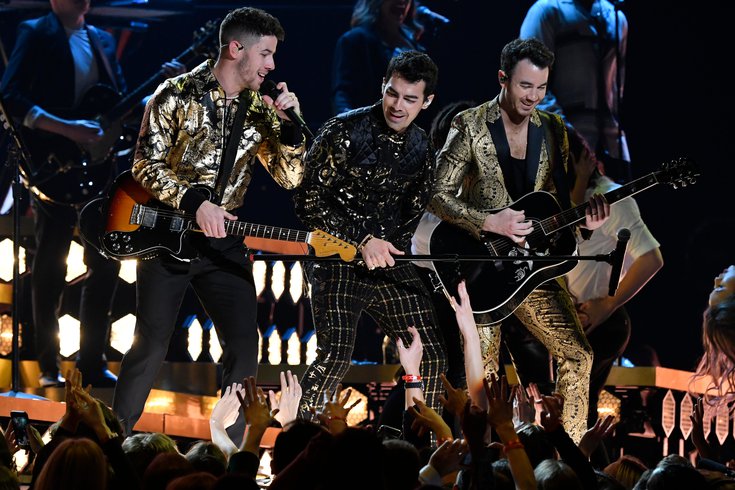 Jonas Brothers fans got a pleasant surprise when the New Jersey natives took to Instagram to let their followers know that the band's sixth studio album, their second since their 2019 comeback "Happiness Begins," is complete.

Fans of the Jonas Brothers were happily surprised last week when the group posted a photo on social media teasing new music.

The popular boy band – made up of New Jersey natives Kevin, Joe and Nick – took to Instagram on Thursday to let their followers know that a sixth studio album, the second since their 2019 comeback, was in the works.

"Making the new album," was the straightforward caption of the photo, which showed the band standing around a piano. Jon Bellion, an American singer-songwriter, rapper and record producer, was seated at the instrument, presumably working with the brothers.

Middle brother Joe blew up the comment section to let fans know that not only was a new album in the works, it was in fact already completed. "You mean finished the album," he wrote.

Following the new album teaser, the group performed at the Global Citizen Festival in New York City on Saturday. The festival, which also featured performances by Metallica and Mariah Carey, raises money to end extreme poverty.

The brothers were born in Wyckoff, Bergen County and first formed their pop-rock band in 2005. They skyrocketed to fame with appearances on the Disney Channel, including the 2008 movie "Camp Rock" and hit songs like "S.O.S." and "Burnin' Up."

After a less-than-amicable breakup in 2013 to pursue solo projects, the brothers reunited for the 2019 album "Happiness Begins," featuring hit single "Sucker." The song became the band's first number one single on the Billboard Hot 100. Their early journey, painful split and reuniting were documented in the 2019 documentary "Chasing Happiness."

In 2019, the Jonas Brothers embarked on their worldwide "Happiness Begins" tour, which featured stops in Philadelphia and Atlantic City. The band's "Remember This" tour started in 2021 and featured a stop in Camden.

All three brothers are now husbands and fathers, and each continue to pursue projects on the side. Kevin recently hosted the ABC reality series "Claim to Fame" with youngest brother (and non-bandmate) Frankie; Joe makes music with dance rock band DNCE; and Nick was a judge on this summer's NBC reality competition "Dancing With Myself."

These projects, along with the band's touring schedules, left little time for fans to speculate that a new album could be coming so soon.

Predictably, the internet exploded with excitement after the surprise announcement.

The only good news this week, is hearing that @jonasbrothers are making a new album 😫

my will to live has returned:

the jonas brothers are writing a new album as we speak

THE JONAS BROTHERS ARE MAKING A NEW ALBUM IM SO EXCITED

While a release date for the album has not been revealed, the Jonas Brothers are playing three nights in Vegas in November, possibly giving them the chance to perform their first single from the album.

Back in August, Kevin was spotted by fans on the Ocean City boardwalk while on vacation with his family. Hopefully, his stay down the shore gave the oldest JoBro some much needed R & R before all of the excitement ahead.