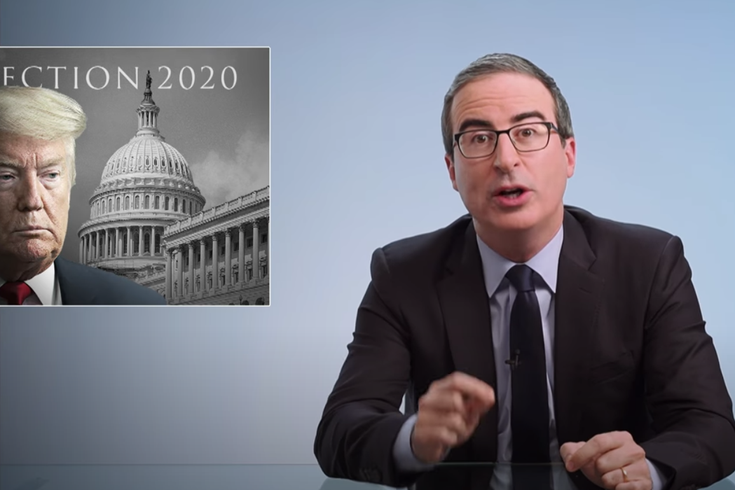 "Last Week Tonight" host John Oliver denounced President Donald Trump's baseless claims of voter fraud in the 2020 election and blamed the Republican's rhetoric for the threats made against the Philadelphia City Commissioners, during Sunday night's episode.

The comedian also criticized some media outlets for stoking the flames of voter fraud alleged by Trump since the presidential election took place.

"That's awful, and Trump is playing a dangerous game here because there's a huge difference between 'not my president' and 'not the president,'" Oliver says, referencing the protests that took place after the 2016 election. He explains the difference between then and now is that Hillary Clinton did concede the election to Trump, after which President Barack Obama began meetings with the Trump team to begin working on the transition.

Trump has done neither of those. Instead he and his media-organization allies continue to push baseless conspiracy theories.

"And to be clear, people who are that angry are not riling themselves up in a vacuum. They've been fed a steady diet of misinformation, bullsh** fraud claims, and a victim narrative from outlets like FOX News, Newsmax, OAN, and most importantly, Trump himself," Oliver says. "... Trump has chosen to sow all this chaos around the election despite the fact that deep down he knows it is over."

As Pennsylvania proved to be critical in securing President-elect Joe Biden the election, Oliver made multiple other references to the events that have made news in the state during the past week: like the two armed men outside the Pennsylvania Convention Center, where votes were being tallied inside; and instance of alleged voter fraud in Forty Fort, Luzerne County, where a registered Republican attempted to vote twice — both as himself and for his deceased mother.  That one led to Oliver having a field day about the the origin of the Forty Fort's name.

"Apparently the town was named after the original forty settlers who built a fort there. But I call bullsh** on that, because I refuse to believe that there just happened to be forty settles who names their fort 'Forty Fort' without being fully aware of how funny that sounds," Oliver says.