Goldberg declined to dismiss the lawsuit filed last year by Kathleen O'Donnell, a Norristown resident who used the screen name "Knotty is a Tramp" to post disparaging remarks about Knott in the comment sections of online news articles. O'Donnell's username included an unflattering picture of Knott drinking from a bottle of alcohol.

O'Donnell claims Kathryn Knott and her father, Karl, used his then-position as Chalfont police chief to retaliate against her, alleging they conspired with former Bucks County District Attorney David Heckler and two county detectives to threaten criminal charges. Heckler left office in September 2016, a year before his second term was to end.

O'Donnell was fired from her position job in Chester County after the detectives met with her employer, according to the lawsuit.

Knott, of Upper Southampton, was released from prison last year after serving five months for her role in the 2014 beating of a gay couple in Center City.

She was among three defendants charged with assaulting Zachary Hesse and Andrew Haught, who was knocked unconscious and suffered a broken jaw that needed to be wired shut for about two months.

With the assault gaining significant media attention, O'Donnell created an account on Disqus, an online commenting platform used by PhillyVoice and many other digital media sites.

Another one read: "My daddy the chief of police will get me out of those charges because I’m an entitled girl and don’t deserve any charges or jail time. Orange doesn’t suit my complexion." 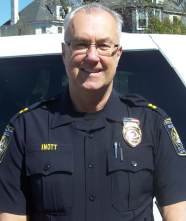 Karl Knott is captain of patrol for the Central Bucks Regional Police Department, which serves the boroughs of Chalfont, Doylestown and New Britain. He was the former chief of police in Chalfont Borough.

In requesting dismissal of the lawsuit, the Knotts argued that O'Donnell failed to adequately allege their involvement in a conspiracy, saying they simply “complained to law enforcement officers that some unknown person had appropriated Kathryn’s identity in order to post phony disparaging comments falsely purporting to be from Kathryn.”

In an order released Oct. 4, Goldberg stated O'Donnell "at a minimum ... has alleged enough facts to raise the reasonable expectation that discovery will reveal evidence of a conspiracy."

O'Donnell alleges Karl Knott – the current captain of the Central Bucks Regional Police Department – contacted the D.A.'s Office to assist him in identifying the individual behind the account. He then allegedly arranged a meeting where he sought to convince the Heckler's office to force the then-unidentified O'Donnell to "cease publication."

Detectives Martin McDonough and Mark Zielinski met with Kathryn Knott at her home and gained a court order for the I.P. addresses associated with the posts, O'Donnell claims.

Later, they allegedly met with her boss at her Chester County workplace and threatened O'Donnell with criminal charges if she continued to post from the account.

Goldberg also declined to dismiss Heckler, McDonough and Zielinski from the lawsuit, ruling their legal arguments for varying forms of immunity were premature. But he dismissed Bucks County as a defendant after O'Donnell conceded she failed to state a claim against the county.

The lawsuit was filed in April 2016 in the U.S. District Court for the Eastern District of Pennsylvania.

Knott, who was part of a group of 15 people that encountered the gay couple after celebrating a friend's birthday in Center City, was the only person to serve prison time for the assault.

Her co-defendants, Philip Williams and Kevin Harrigan, accepted plea deals that included probation and 200 hours of community service at an LGBT center.