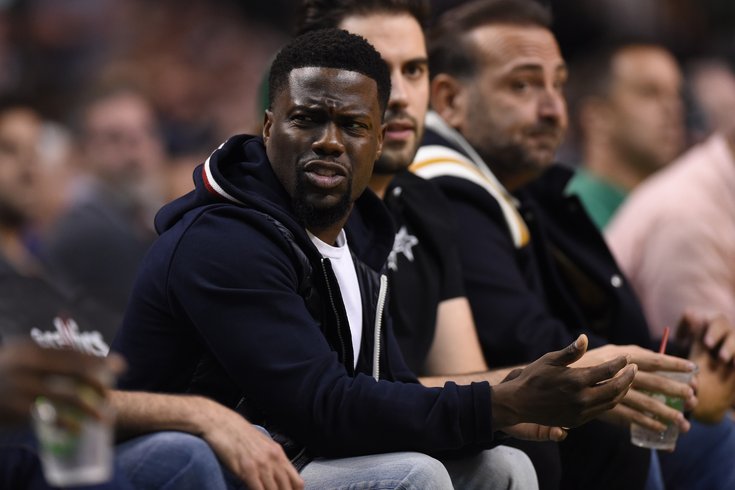 Philly native Kevin Hart is seen here in attendance at a Philadelphia 76ers playoff game in Boston in May 2018. Hart, after reconsidering his decision not to host the 2019 Oscars amid controversy, says he will not host the award show.

The controversy surrounding Kevin Hart's non-hosting of the 2019 Academy Awards permeated throughout the start of award show season at Sunday night's Golden Globes.

In case you're behind on the issue, Hart stepped down from hosting the Oscars after several homophobic tweets written by the comedian resurfaced last month. In an in interview with Ellen DeGeneres last week, DeGeneres urged Hart to reconsider. After further consideration, Hart again declined hosting the ceremony.

RELATED: With Kevin Hart out as Oscars host, the Internet wants Gritty | PHOTOS: The stars come out for the Golden Globes

The controversy was touched on at the top of the Golden Globe Awards, with co-host Andy Samberg starting off, "We are gonna have some fun, give out some awards, and one lucky audience member will host the Oscars!" The Academy has announced they would proceed without a host this year.

On the red carpet, Lena Waithe, one of the stars of Showtime's "The Chi," also brought up the topic while being interviewed by Variety.

Lena Waithe on Kevin Hart Oscar controversy: "I don't think he even understood the ramifications of what he said. I do think it has to be a teachable moment for all of us" https://t.co/xW4bpydr9H pic.twitter.com/bT7EOX0axd

"I think we got to make this a teachable moment," she said. "We should stand firm at what we did and try to challenge everybody else not to do that kind of thing anymore."

She continued, "We got to make sure the gay community is no longer the butt of the joke. That's my thing." She said she didn't think Hart "understood the ramifications of what he said," but that it's "a teachable moment for all of us."

After Amy Poehler and Maya Rudolph presented two Golden Globe awards together, arguably stealing the show with an Emmy-spoof marriage proposal, some on Twitter suggested they'd make suitable for the Oscars, as well.

For your consideration: Amy Poehler and Maya Rudolph as the #Oscars hosts in 2019. #GoldenGlobes pic.twitter.com/ZcNZ7G6YCi

Petition to have Amy Poehler and Maya Rudolph host the Oscars #GoldenGIobes pic.twitter.com/a2WYhaRBHb

IF WE STILL DONT HAVE ANYONE TO HOST THE OSCARS, CAN AMY POEHLER AND MAYA RUDOLPH DO IT PLEASE

My pics to host the Oscars are Amy Poehler @smrtgrls and Maya Rudolph @MayaRudolph these woman are incredibly talented funny and best of all not Homophobic . pic.twitter.com/dqIv02wZF8

Catch up on what happened at the Golden Globes here.