Alli Maurer donated one of her organs to prevent her brother, Chris, from going into renal failure 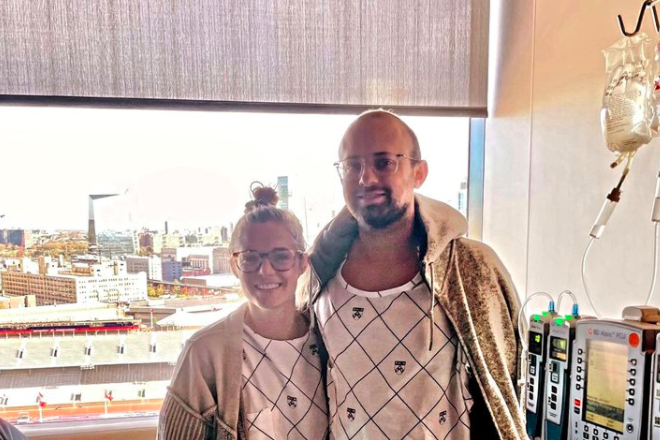 Alli Maurer, 28, gave her older brother Chris, 31, one of the greatest gifts possible when she donated one of her kidneys to him in November. Now, the Philly siblings are emphasizing the benefits of living-donor kidney transplants.

Two Philadelphia siblings have a lot to be thankful for this Christmas as they celebrate a special gift shared between them.

Chris Maurer, 31, of Northern Liberties, received a kidney transplant last month from his younger sister, Alli, more than two years after he learned he needed one.

"It is a pretty incredible gift to receive," Chris said.

As a type 1 diabetic for most of his life, Chris knew that kidney damage was a potential complication of the disease. But it wasn't until he was hospitalized with influenza two winters ago that his doctors realized how close he was to needing dialysis, a treatment used to remove excess water and toxins from the blood in people whose kidneys are no longer functioning properly.

Though the flu does not directly impact the kidneys, the stress of the illness probably put additional strain on them, Maurer said. He was told that a kidney transplant was the best option to keep him off dialysis.

Diabetes is one of the main causes of renal failure and the need for kidney transplants in the U.S., according to Dr. Matthew Levine, one of the transplantation surgeons at Penn Medicine involved in Maurer's care.

Other potential causes are polycystic kidney disease, chronic uncontrolled high blood pressure and the inflammation and scarring of the tiny filters within the kidneys.

Maurer said his team of doctors at Penn immediately started the evaluation process to find the right donor among his family members. It took more than two years.

"It was a little mentally taxing not knowing if you were going to get sicker before a match can be found," he said. "However, the doctors and the care I received were great.'

The evaluation process begins with potential donors filling out a screening questionnaires online to make sure they don't have any medical conditions that could prevent them from donating.

"If there are multiple potential donors, then the next step is to see who is the best blood type and antigen match," Levine said. "If a recipient has strong antibodies against a donor's human leukocyte antigens, the risk of rejection is high and a donor would be declined for that recipient."

Alli, 28, of Graduate Hospital, ultimately ended up being the best match. Chris initially didn't want to put her through the surgery, but she wanted to help her brother.

The Maurer siblings had their surgeries Nov. 2. Alli went in for her surgery to remove one of her kidneys two hours before her brother arrived at the hospital for the transplantation procedure.

They said their recoveries have gone well.

"The first couple of weeks were tough, but nothing I couldn't handle," Chris said. "Now I am feeling back to normal."

Alli hasn't experienced any complications from her surgery, either. She said the donation process is more attainable than many people realize. She said there is such a big need for living kidney donors and that the process is pretty straightforward.

"It would be nice if more people would do it for a family member or even a complete stranger," Alli said.

This is a message that Levine emphasizes, too. There are nearly 100,000 patients on the kidney transplant waiting list in the United States. There is a strong need for people willing to become living kidney donors, he said.

Though there are risks with any surgery, the overall risk of complications is very small for kidney donors, Levine said. The procedure can be done laparoscopically and the donor generally only needs to spend two nights in the hospital.

Studies have shown that people who donate a kidney have just as long life expectancies as those who do not, according to the Mayo Clinic. The remaining kidney is able to perform all necessary functions.

For kidney recipients, transplant is associated with an overall better quality of life and lower risk of death than dialysis.

Some complications are possible, including blood clots, bleeding, leaking from the tube that links the kidney to the bladder, infection, failure or rejection of the donated kidney, death, heart attack and stroke.

Penn encourages patients to look for a living kidney donor instead of staying on the national waiting list for a deceased donor, Levine said. The wait can take up to six years in the greater Philadelphia region.

Living donations also last longer – between 12-20 years compared of 8-12, which is especially important for younger transplant patients like Maurer. There also is a lower risk of rejection of the donor kidney.

Maurer said it is important to trust your care team and have faith that the right match will be found.

More information about the kidney transplant process at Penn can be found online.