The company's sales grew by 700% last year, and now co-owners Alex and Jacob Cohen are opening a new storefront at 113 E. Girard Ave. 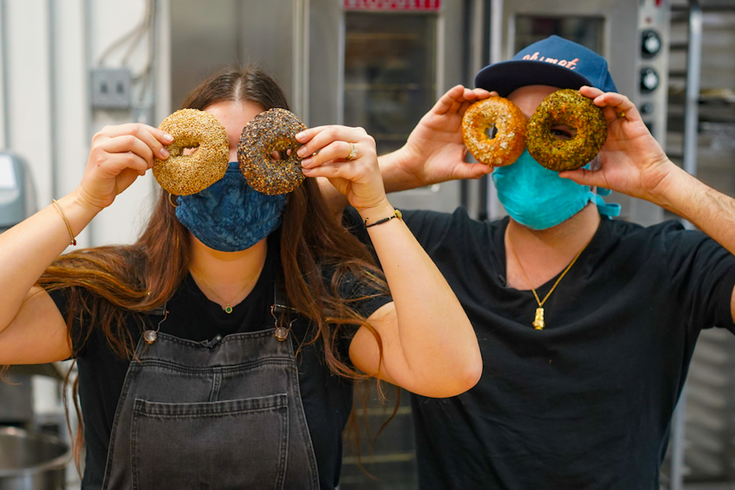 A husband and wife duo is looking to fill the holes in Philly's bagel scene with a new brick and mortar location in Fishtown.

Kismet Bagels co-owners Alex and Jacob Cohen started making the bread in the early days of the pandemic as a way to pass time. Their homemade creations were so good that they started selling them to friends and neighbors and eventually decided to start a company.

The operation has grown exponentially over the past two years, and now the couple is ready to open their own storefront at 113 E Girard Ave.

They're not sure exactly when the 540 square foot space will be open to the public, but the Cohens plan to have the operation up and running before the end of the month.

The menu will include open-faced bagel and bialy sandwiches, housemade potato latkes and beverages like drip coffee and fresh-squeezed orange juice.

The move came after Kismet's sales increased by over 700% last year. The business now has 20 employees who make roughly 17,000 bagels and 500 pounds of cream cheese every week.

The company's success is partly due to the couple's frequent collaborations with other culinary companies – like Her Place Supper Club, the Nardone Pasta Company and the Fistown Pickle Project – and its frequent pop-ups at farmers markets and other events.

But the company's rapid expansion can also be attributed to the quality and quirkiness of the Cohens' products.

The bagels are “Montreal on the outside, New York on the inside," Alex Cohen told Billy Penn.

They are available with standard toppings like sesame seeds, poppy seeds and onion, but the couple also uses less traditional add-ins like rosemary and jalapeno.

The Cohens also hope to bring back some limited edition offerings from the company's past, like the cacio and pepe bagel they made in collaboration with Nardone Pasta.

Kismet is also known for its unique cream cheese flavors, like "spring fling," which has Yemenite hot sauce, and a dill and pickle spice flavor created in collaboration with the Fishtown Pickle Project.

But the Cohens told Billy Penn they will consider keeping the store open later if the demand is there and want to try out staying open extra late on the weekends to appeal to Fishtown's bar crowd.