Playing for Isaiah: How La Salle’s football team mended its season after a tragic loss

For the first time since the sudden passing of teammate and 'best friend' Isaiah Turner, members of the Explorers speak about the loss and how it's changed them forever 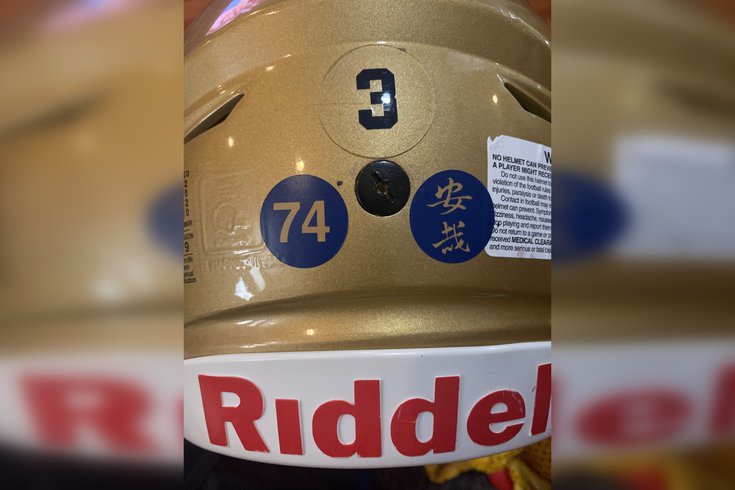 Isaiah Turner's No. 74 decal on the back of La Salle's helmets this season next to Turner's initials in Chinese.

Death isn’t in the vernacular of a 17-year-old.

At least it shouldn’t be.

Being a 17-year-old high school football player comes with a certain invincible veneer. You’re impregnable stainless steel. You’re going to live forever, and probably be able to walk through a few walls of fire without a scratch while doing it.

Then reality hits. It whacks you across the face. It forces you to re-evaluate. It reminds you of a very basic tenet that every second does indeed count. Especially when it involves taking someone far too young and far too good, like Isaiah Turner.

It’s the blunt education the La Salle College High School football team has had to endure this fall. The Explorers lost a very important member of their family when Turner, their 6-foot-5, 300-pound senior left guard, died on Sept. 4 after collapsing at practice of a sickle cell crisis, according to the Philadelphia Medical Examiner’s office on Monday.

The La Salle football team has tried to cope with Turner’s loss ever since.

The Explorers will play Roman Catholic this Saturday night in a Catholic League 6A game. It will be the Explorers’ parents night. Kenyatta Turner, Isaiah’s father, and Kimberly Snowden, Isaiah's mother, are expected to be there.

It will no doubt broach the pangs of emotion the La Salle football team has been dealing with this COVID-19 season.

The byproduct of which has brought La Salle to be adopted by every opponent that its played—even intense rival St. Joseph’s Prep. For their first offensive play in each game, the Explorers line up without a left guard. They take a delay-of-game penalty, which so far the opposing team has refused.

They do it to honor Isaiah.

The Explorers are 3-1 and continue to play in memory of Turner, a jovial, laugh-a-minute kind who would drape his large, long arms around a coach or teammate who was having a bad day or charge up a dull room with his contagious laugh.

How the Explorers have bonded in the shadow of this tragedy is a testament to their steely resolve. They’ve learned to lean on one another, and counsel each other during a time when their adolescent minds would be preoccupied with football, school work, video games, the best places for hot wings, sports and girls—not necessarily in that order.

Senior team captains Jalen Hanton, Paul Jennings, Ryan Wills, Tom Mehlmann and Bob Ballay have been forced the last two months to take an inward look at themselves. At a very young age, they’ve been transformed into teenage shaman, as well as leaders on the field.

“A month ago, we wouldn’t be having this discussion, because I wouldn’t be able to talk about Isaiah without getting emotional,” admitted Hanton, a 5-foot-10, 180-pound defensive back who is receiving attention from Bloomsburg. “My religion class has really helped, and it helped me learn more about myself deep down, so I could heal from the inside out. Isaiah was one of my best friends on the team since freshman year. When I was down, Isaiah was someone who would always bring me back up.

“He knew exactly what to say. He knew how to bring a smile to my face. But he was like that with everyone. And I’ll be honest, he would want us to play this year. He was someone that wouldn’t want anyone crying over him, but what happened to Isaiah is something none of us really understood.

“You’re 17, you think you’re going to be around forever. Then one day, your best friend is gone. How do you react to that? No one 17 [years old] should be talking about anyone dying. For me, this whole thing took time. It helps being faithful in God. When it happened, you question and think, ‘What God would take someone like Isaiah?’ It was like someone put a needle right through my heart.”

Over time, Hanton noticed a difference. Tears turned to laughter. When stressed, he derived strength from his teammates, and it’s helped receiving so much respect and support from the other Catholic League teams.

“I don’t know where I would be without my teammates,” Hanton said. “You can start moving forward. You can start looking back and laugh about all of the funny things Isaiah did and said. He would like that.”

“We had to stay strong for each other, and we linked arms and came together,” said Wills, a 6-foot-4, 280-pound left tackle who has received 15 scholarship offers, including Maryland. “I look around and I’m with 80 of my brothers. That’s what we’re playing for — that, and Isaiah. Personally, I had some things to get past.

“That’s what brought us all together.”

Not being alone has also helped.

“We played Manheim (Central), we played Delaware Valley, Downingtown (East) and Prep, and they’ve all been respectful,” Wills said. “It’s not always respectful when it comes to Prep (laughs), but the outpouring we’ve gotten from other teams in the area, and beyond, has been great.

“It’s really unbelievable the support we’ve received from (Archbishop) Wood, Roman and Prep. It makes us know that it’s bigger than us. What I’ll always remember is when the team gathered two days after Isaiah’s death at the school’s grotto. There wasn’t a word said. It was just an outpouring of emotion. There were guys I didn’t even know that I bonded with.

“The funny thing is, Isaiah wouldn’t want anyone crying about him.”

Jennings, a 6-foot-4, 240-pound defensive end committed to Penn, drove away from practice that Friday, Sept. 4 afternoon thinking everything was okay. Everyone thought Turner was suffering from cramps. Nothing more. When Jennings received a text message a few hours later that Turner was dead, he thought it was a sick joke.

“I couldn’t believe it, I was really skeptical, I really did think someone was playing a sick joke, and thought to myself, ‘There was no way, no chance,’” Jennings recalled. “I remember going out to pick up pizza for my family and when I got back home, I saw the look on my parent’s faces—this was real.

“It really hit hard. There were a lot of tears. One thing I remember my dad said to me was the worst things happen to the best people, and that couldn’t be truer than for Isaiah, who was the sweetest, kindest kid who always looked out for everyone else.

“One thing I learned was to enjoy everything while you have it, because Isaiah is a perfect example that you never know when you’re going to lose someone. It’s about making the most of every second you have, and never having any regrets.

“But you never fully recover from something like this though. The positive side is the brotherhood this created with all of us. I mean players, coaches, past teammates, everyone came together because they really cared.”

At 17, no one would expect to be going through this. This brought us together... Life is a lot more than football. Our team and coaching staff realize that. We might be not going to the playoffs, but we’re all one.

Explorers’ head coach John Steinmetz’s main priority was to keep some semblance of normalcy. Throughout the grieving process, Steinmetz constantly stressed that everyone mourn in their own way and in their own time.

But with teenaged boys, especially high school football players, there could be a reluctance to be openly emotional and accepting of other’s bereaving timeline.

“My parents helped me,” said Jennings, who’s headed to Penn’s prestigious Wharton School of Business. “They told me I had to make sure I was okay before I was able to help anyone else with their grief.

“Regardless of what happens this season, looking back, being able to play with the pandemic and how we faced this loss, I’ll always look back on this year as a victory.”

Mehlmann, a 5-foot-10, 200-pound fullback, was at the Jersey shore with his teammate Gavin Daly when he found out. Mehlmann and Daly looked at each other in disbelief. Both couldn’t comprehend it, saying to each other, “This isn’t happening; this can’t be real!”

“At 17, no one would expect to be going through this," Mehlmann said. "This brought us together. It’s also not about seeing a face in the school hallway and nodding. We all came together. None of us would be here if we didn’t. Life is a lot more than football. Our team and coaching staff realize that. We might be not going to the playoffs, but we’re all one.

“You learn to live in the moment.”

Before kickoff each game, the La Salle team gathers as one. They collectively put their heads down and hold a moment of silence before they go out and play. Joe Wade, the Explorers’ offensive coordinator, and Chris Myers, the offensive line coach, came up with the thought of lining up in memory of Isaiah without a left guard on the first play.

Steinmetz used to pick Isaiah Turner up for summer workouts. One summer, Turner worked as a camp counselor, and what will resonate with Steinmetz is the memory of seeing Turner, this 6-foot-5, 300-pound man-child, running around laughing with a bunch of eight-year-olds.

What will always echo with Jennings was Kimberly Snowden, Isaiah’s mother, as a pillar of strength.

“I look back at Isaiah’s mother at the funeral service,” he said. “We all went up to her to express how sorry we were for her loss. I’ll never forget her asking if we were okay and asking about us in the most tragic moment of her life.

“I can’t think of a better gift to give Isaiah and his mother to show we’re playing in his memory and having fun—something Isaiah would want.”