...and an absolute nightmare for opposing offenses. 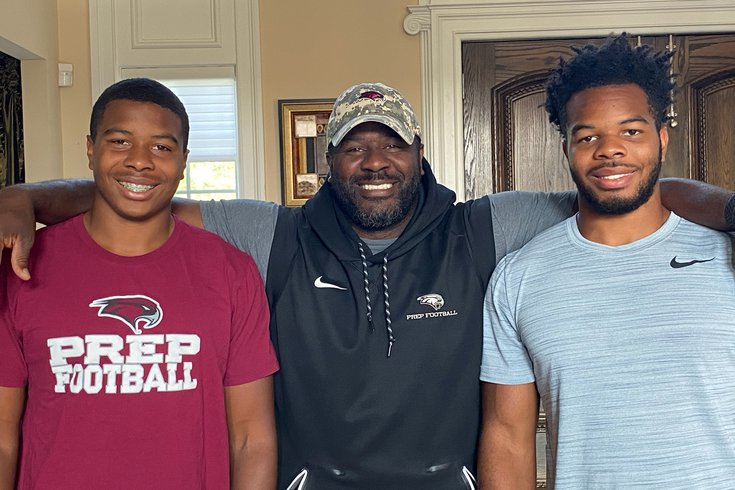 His voice is deeper. His face is sharper, more distinct, just like his build. Josiah Trotter has done a lot of growing up in a year’s time. The St. Joseph’s Prep sophomore middle linebacker, and youngest of beloved former Eagles’ linebacker Jeremiah Trotter’s three kids, is getting his man strength early.

Josiah is also having a wish fulfilled this fall. With the COVID-19 pandemic creating havoc with sports around the world, forcing seasons and games to be cancelled—Josiah is getting a special moment every time he takes the field: The chance to play possibly for the last time alongside his older brother, Clemson-bound Jeremiah Trotter Jr., the Hawks’ 6-foot-1, 217-pound senior outside linebacker rated one of the best in the country.

It’s been nine years since the Trotter brothers played together, when Jeremiah Jr. was 8 and Josiah was 6.

The two are definitely different. Jeremiah Jr. is on the intense, stoic side. He’ll talk and open up, though only after he knows you. Josiah can’t help but smile. He’s an approachable, jovial 15-year-old who’s taken on a lot of responsibility in a very short period of time, ironically, because of his brother.

If Jeremiah Jr. wasn’t lost last season with a broken right arm, Josiah would not have been thrust into a starter’s role as the Hawks’ middle linebacker during St. Joe Prep’s push toward consecutive PIAA Class 6A state championships.

Now, because of the experience Josiah gained last season and Jeremiah Jr. being back healthy and menacing as ever, the Trotters play side-by-side at linebacker—and in the Hawks’ offensive backfield when St. Joe’s Prep goes into its “Big” goal line package.

“I don’t think I would where I am without Jeremiah,” admitted Josiah, who’s already received offers from Penn State and Temple, on a list that promises to grow. “It means a lot to me to play next to Jeremiah. I played in my brother’s shadow, and in my dad’s and this is my chance to show what I can do.

“But it means more that we’re together. I’ve learned a lot from both my dad and my brother. It was a long time ago since we played together. I wasn’t supposed to play up with him, but my dad decided to move me up because I was big for my age. This is a bigger deal for me to play with Jeremiah, because he’s always someone I looked up to.

“He pushes me and he’s made me better on and off the field. This summer, because of what happened freshman year, I had to be better. I needed to make more plays.”

Josiah has transformed himself from a rather chunky freshman, to a lean, 6-foot-1, 215-pound tackle machine. What’s more is Josiah is still growing. By the time Jeremiah Jr. returns from Clemson this time next year, he may be looking up at his younger brother.

Despite the pandemic, this has been a dream season for Jeremiah Trotter Sr. The former Eagle helps with the St. Joe’s Prep defense and is relishing watching his sons on the same field together.

“I’m tickled to death watching them, and I’m beyond proud of both of them, and beyond proud of the Prep program. I’m fired up about the whole team,” Trotter said. “I know both of them are excited to play next to one another. Jeremiah gets excited, but he’s a poker face. Josiah is the kind of kid who shows his emotions.

This has been a shining light for me... I’ll be able to look back at my senior year and what we were able to do and what we overcame with the pandemic and everything and know I did it with my brother next to me.

“You have to believe this is a great thing more for Josiah, because he is the younger brother and he’s always looked up to Jeremiah. I told Josiah, just like I told Jeremiah at the same age, that he’s going to be the best linebacker in the country. They push each other. Josiah got bigger, stronger and faster, and when you combine that with his football IQ, he’s going to be a force to be reckoned with.”

Josiah probably has no bigger fan than Jeremiah Jr.

“My father always wanted me to be better than him, and I want Josiah to be better than me,” Jeremiah Jr. said. “It’s why I push him the way I do. He’s improved so much from last year, but how he’s playing isn’t too much of a surprise.

“It definitely inspires me having him play next to me. We both love this. I know he’s looked up to me. I wouldn’t mind us being together beyond this [at Clemson]. The coaches there ask about him every time they talk to me.”

Josiah wears a 13-size shoe. Jeremiah wears a 12½. Josiah may grow another two or three inches.

“I don’t think anything Josiah does surprises me, because when we work out together, I already know what he can do,” Jeremiah Jr. said. “Comparing him to other kids his age, there’s no comparison. He’s definitely something special, the way he plays and how he knows the game.

“He’s going to be bigger than me. I definitely want him to be better than me.”

Jeremiah Jr. is pretty special himself.

Their father has two career NFL touchdowns. Maybe the sons could exceed their dad this year?

“We’ll see,” Jeremiah Jr. said, laughing. “I can’t say too much. They put me and Josiah together to go in and block (on goal line offense). In the times we’ve run ‘big,’ we haven’t been stopped. I take a lot of pride in that—and I get to share that with my brother. I get to smile. I do that sometimes (laughs).

“My goal is we both play linebacker next to each other, and I wouldn’t mind him seeing in [Clemson] orange one day. This year is very special for me. We haven’t played together in nine years. It’s crazy.

“This has been a shining light for me, and I know I’ll be able to look back at my senior year and what we were able to do and what we overcame with the pandemic and everything and know I did it with my brother next to me.”

Prep's next game is a road test on Saturday against fellow PIAA powerhouse Archbishop Wood.