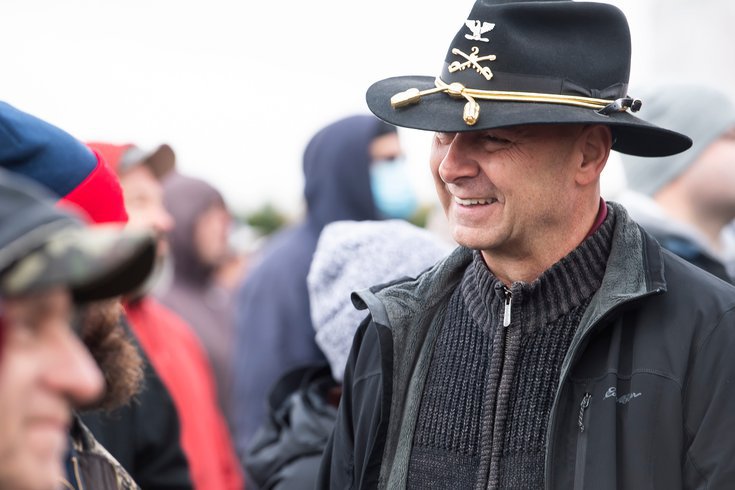 Republican Pennsylvania gubernatorial candidate Doug Mastriano is featured in a new documentary that was set to premiere in Lancaster County this month. Two venues have now canceled screenings of the film.

A pair of venues in Lancaster County have called off plans to screen a documentary supporting Doug Mastriano in Pennsylvania's race for governor, citing backlash over the film's "nationalist populist agenda."

Penn Cinema originally had booked July 16 for the premiere of YouTuber Steve Turley's documentary, “Return of the American Patriot: Rise of Pennsylvania,” which features interviews with Mastriano and other Christian conservative figures in the state.

"A patriotic alternative media and grassroots have risen up," Turley narrates in the film's trailer on YouTube. "The populist revolt that made 2016 a reality is entering its stage of resistance."

The planned screening at Penn Cinema was met with backlash from Lancaster Stands Up, a progressive organization supported by the PA Stands Up State PAC, which has chapters across the state.

Suzy Wurtz, a member of Lancaster Stands Up, reached out to Penn Cinema last week to share safety concerns about the screening. She posted the theater's response on Twitter.

"We did have plans with this group but once we learned of the nationalist populist agenda, we canceled the event," Penn Cinema, which is owned by Penn Ketchum, told Wurtz. "We worry about your safety too and we are ALWAYS committed to putting your safety and comfort first."

Turley Talks, the organization led by the film's producer, criticized Penn Ketchum for canceling the event "despite down payments" and threatened to sue for breach of contract. Turley Talks president Ralph Cochran called pushback against the screening "social media bullying pressure from angry anti-Christian activists."

Mastriano was supposed to make an appearance at the screening, pending approval from the venue's owner and management, Cochran said. Other figures interviewed in Turley's documentary include Audit the Vote co-founder Toni Shuppe and FreePA founder Tabitha Valleau.

In the days after Penn Cinema canceled the event, Turley Talks lined up an alternative venue for the screening at the Wyndham Lancaster Resort and Convention Center. Turley announced Tuesday on Facebook that the hotel "succumbed to (the) woke mob" and also canceled the screening.

"We have a backup location but will not be announcing until 24 hours out from event," Turley added.

Contacted on Monday afternoon, Turley did not immediately respond to a request for comment.

Mastriano's campaign has blended zealous allegiance to former President Donald Trump with a policy platform that draws from the candidate's conservative Christian views. In Pennsylvania, Mastriano has been among the loudest voices to falsely claim that voter fraud caused Trump's loss to Joe Biden in the 2020 presidential election. Mastriano was not only among those in attendance at the Jan. 6 Capitol insurrection, but his campaign provided thousands of dollars for charter buses to Washington, D.C. that day.

Throughout the COVID-19 pandemic, Mastriano also has been a relentless critic of Wolf's public health policies, which Turley's documentary describes as a series of efforts to strip away freedom and basic rights in Pennsylvania. Meanwhile, Mastriano has backed legislation that would severely curtail abortion rights in Pennsylvania, a realistic prospect after the Supreme Court's overturning of Roe v. Wade last month.

A USA Today/Suffolk University Poll released last month showed Shapiro held a narrow four-point lead over Mastriano in the governor's race, with a margin of error of plus or minus 4.4 percentage points. Shapiro had the support of 44% of survey respondents compared to Mastriano's 40%, with another 13% of voters still undecided.