After the restaurants owners' pleaded guilty to tax evasion, the franchise owned by Tony Luke Jr. complained of reputation blowback 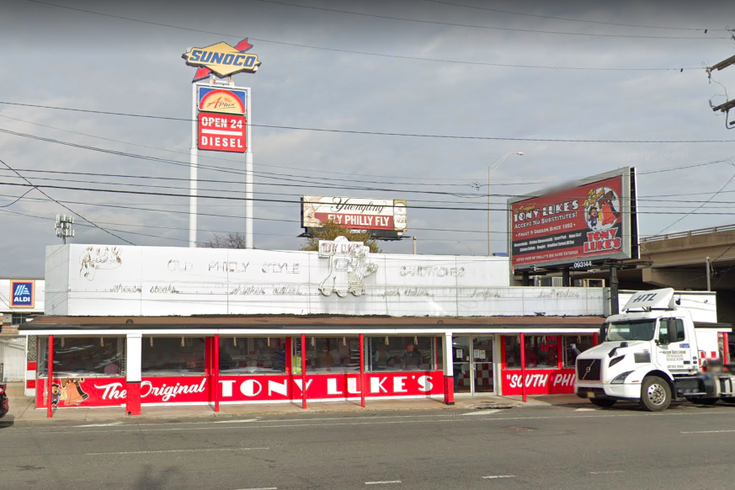 The Original Tony Luke's in South Philadelphia will soon be renamed Tony's and Nick's Steaks. The restaurant is separate from the Tony Luke's franchise and brand run by Tony Luke Jr., who splintered his business off from the original cheesesteak shop in 2015.

The Original Tony Luke's, a mainstay for cheesesteaks in South Philadelphia since 1992, will have a new name and signage at its storefront by the end of the month. Moving forward, the business will be known as Tony's and Nick's Steaks, in contrast to the separate Tony Luke's franchise that emerged out of a bitter family dispute.

Rumblings of a possible change emerged this weekend when a Twitter user posted a photo of the Original Tony Luke's at 39 E. Oregon Ave. The signage on the building had been partly removed.

In May, the restaurant's owners, Anthony Lucidonio Sr., 84, and his son, Nicholas Lucidonio, 56, both pleaded guilty to federal tax evasion charges.

By association, the IRS fraud case reflected poorly on the Tony Luke's franchise, which was founded by Anthony's son, Tony Luke Jr., after he was fired from the Original Tony Luke's in 2015. At the time, Tony Luke Jr. had sued his father and brother, splintering the business into a franchise with multiple locations and no affiliation with the original shop.

Tony Luke Jr., who worked at the Original Tony Luke's for much of the period investigated by the IRS, was never charged with a crime and was not involved in the tax fraud scheme. The IRS became aware of the fraud during the course of Tony Luke Jr.'s lawsuit proceedings over franchising rights and royalties from the Tony Luke brand.

On Monday morning, Nicholas Lucidonio confirmed the business will be changing its name by the end of July.

In the simplest terms, Lucidonio explained that the name change stems from "legal s***."

"Because of the IRS situation, the franchise felt it was being hurt by the bad publicity," Lucidonio said.

An attempt to reach Tony Luke Jr. was not immediately returned. Nicholas Lucidonio said the name change will resolve the legal dispute.

Between 2006-2016, investigators found that Tony Luke Sr. and Nicholas Lucidonio failed to deposit millions of dollars in cash to the business bank of the Original Tony Luke's. The Lucidonios gave their accountant incomplete information to prepare and file annual corporate income tax returns based on underreported income, prosecutors said.

The father-and-son duo also committed payroll tax fraud by writing checks for employees that only represented wages for a portion of their hours worked, investigators found. The employees were directed to endorse their paychecks back to the Lucidonios and store managers, in exchange for receiving envelopes containing cash. A substantial portion of the cash payments made to employees did not have federal taxes withheld, according to the 2020 indictment.

Concerned that their dispute with Tony Luke Jr. would bring light to the tax fraud, Tony Luke Sr. and Nicholas Lucidonio directed their accountant to prepare and file amended corporate tax returns for 2013 and 2014 to help cover their tracks. The scheme was too extensive to fix with amended returns.

In a plea memorandum filed in federal court in May, the government said it intends to prove at the Lucidonio's sentencing hearing, in September, that the IRS lost between $550,000 and $1.5 million as a result of the scheme.

The cheesesteak shop has remained open in South Philadelphia since the guilty plea, and there are no plans to shut the business down based on the outcome of the Lucidonios' sentencing in September.

But after a 30-year run in South Philadelphia, the Original Tony Luke's will now be Tony's and Nick's Steaks — leaving no doubt about the distinction from the Tony Luke's brand.