Amid outcry from residents, Timothy Loehmann left the one-officer Tioga Borough police force two days after he was hired 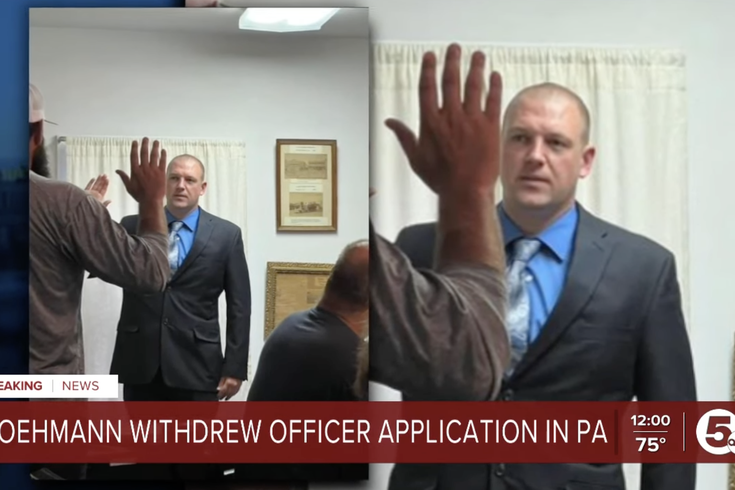 Timothy Loehmann, the former Cleveland officer who fatally shot 12-year-old Tamir Rice in 2014, has resigned, amid backlash from residents, from the police department of a north central Pennsylvania town just two days after he was sworn in.

According to the Tioga Borough website, effective Thursday, Loehmann had withdrawn his application to be the lone police officer in the town. Tioga, located about 145 miles north of Harrisburg and very close to the New York border, had a population of 702 residents as of the 2020 Census.

Steve Hazlett, president of the Tioga Borough Council, announced Loehmann's hiring Tuesday in a since-deleted Facebook post showing a picture of the officer's swearing in.

According to NBC News, the Facebook post was met with comments of outrage, like one person who wrote: "If barred from 1 state that should be the end of his profession."

Loehmann was sworn in on July 5 at a borough council meeting after an unanimous vote by the council members, the Williamsport Sun-Gazette reported. The newspaper also reported that Loehmann was identified as "Timothy Lochman" to local press, and Tioga Borough Mayor David Wilcox posted video from the council meeting to Facebook in which the officer is referred to as "Lochmann."

"Council members Steve, Bob and Doreen, you should be ashamed of yourselves. All 3 of you have admitted to knowing about this from the beginning. To imply that Alan Brooks and myself also knew about it is making me sick to my stomach. This is what the corruption has now come too [sic] in our small town. The town expect resignations from you at the special meeting Tuesday evening," Wilcox wrote.

NBC News reported that Henry Hilow, Loehmann's attorney, said his client quit the Tioga Borough police officer position because he did not want to be a distraction.

On Nov. 22, 2014, a witness called 911 to report an individual with a firearm at a playground; the caller noted the weapon was likely fake, although this was allegedly not relayed to police. Loehmann, a trainee at the time, fatally shot Tamir Rice, who was holding a toy replica pistol, just three seconds after getting out of his patrol car at the park.

In 2015, an Ohio grand jury declined to criminally charge the officers, and Loehmann was eventually fired in 2017 for lying about employment history on his original job application.

Since then, in 2018 Loehmann was hired part-time as an officer in Bellaire, Ohio. He resigned that job five days later amid outrage from residents, according to the Williamsport Sun-Gazette.

"He shouldn't be a police officer anywhere in the United States. I'm actually shocked that anybody would give him a job knowing what he has done to my family," Samaria Rice, Tamir's mother, told the Washington Post on Thursday before Loehmann's resignation from the Tioga Borough department.

Late Friday afternoon, Pennsylvania Attorney General Josh Shapiro sent a letter to Hazlett, the Tioga Borough Council president, that stated the borough council had not completed the state-required background and records checks on Loehmann before he was hired, WENY reported.