Late night roundup: Colbert, Fallon, and Meyers air live after the State of the Union 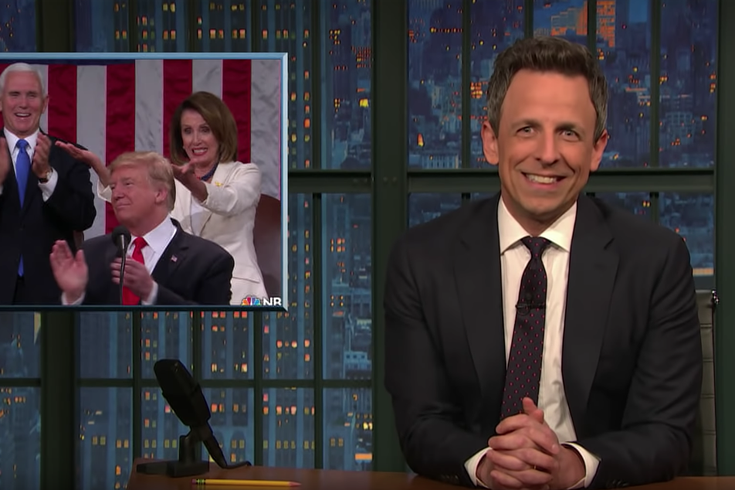 “We are live, if, what you call, what we just watched, ‘living,’” Colbert mentioned in his opener on the "Late Show." The comedian who typically delivers scathing jokes of the President's statements didn't hold back for his live take on his speech Tuesday night. He talked about everything from the designated survivor being Rick Perry to introducing the First Lady.

Colbert notes, as Trump discussed the economy in his speech, the host, impersonating Trump said, “It is so hot if it wasn’t my economy perhaps I’d be dating it.”

Colbert threw out a mention to Cory Booker, too. In mentioning how Sens. Kamala Harris and Elizabeth Warren invited government employees who were affected by the shutdown, he adds, “Not to be outdone, Sen. Cory Booker brought a hero from his home town of Newark – a flaming parked car. Stay strong, Flaming Parked Car.”

Meyers did a “Closer Look” for the State of the Union address and began by discussing Trump’s policy and thoughts on the border wall. He slowly dove into the address itself and the awkward dynamic between Nancy Pelosi and Trump, even referring to Paul Ryan as a pageant mom. Though the highlight of the segment might be Meyer's take on Trump's idea of a "human wall."

Fallon started his recap by saying, "Well, you guys, between the Super Bowl and the State of the Union that's six hours of our lives we'll never get back."

He discusses several networks who chose not to air the addressing, delivering joke statements from networks like HGTV, Nickelodeon and even one from MTV: "We didn't air the president's address, but we did air a Jersey Shore marathon - which was just as loud and just as orange."