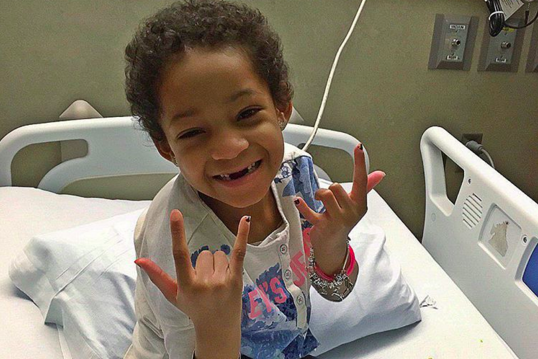 In this dated photo, Leah Still celebrates her last round of cancer treatment.

Five-year-old Leah Still was given 50-50 odds to survive after she was diagnosed in June 2014 with stage IV neuroblastoma, a rare form of pediatric cancer. Despite some complications, she ceremoniously rang the bell at the Children's Hospital of Philadelphia to signal her victory over the disease in July.

On Friday, she began her last round of treatments, and was finally discharged from CHOP on Tuesday, her father Devon Still announced on Twitter.

She really beat cancer! Beyond thankful for all the support y’all showed us

"Words can't describe how proud I am of this girl," Still wrote in a post on Instagram. "No matter how hard it got or how painful the treatments were (and it was pretty bad a lot of the times) she never gave up! I want to thank everyone who followed us as I documented her fight on social media. The amount of support we received was beyond amazing! I can honestly say that you all made a big difference.

"I ask that since Leah's fight is at the end that you follow other families journeys and cheer them on just as you did us! My advice to any family going through this battle: no matter how hard it gets, no matter what the doctors tell you, always remain positive! Speak victory into existence. Give your child's fight with cancer a purpose. Use it to raise awareness so that you can help all kids fighting this disease."

With Leah's future looking bright, Still, a Camden native who attended Penn State, says he can return to doing what he loves.

Still spent three seasons with the Cincinnati Bengals as a defensive tackle before being released in September.

Now, the Houston Texans have signed Still to a future contract.

Leah's last treatment is Friday. I just signed a contract to get back to doing what I l... https://t.co/wSNBpccmzs pic.twitter.com/AEi3GPKYKR

"I told myself from day one with Leah's diagnosis I would give her my all and sacrifice my career because if I lost her to cancer I could never get her back but if I lost football, given the right opportunity, I could get it back. Thanks to the Texans for giving me that opportunity!#TheBlessingsAlwaysComeOnTime"

In August, the Still family launched the Still Strong Foundation to support childhood cancer research and assist families in need when a loved one is undergoing treatment.