The tendril-like formations are usually seen in desert climates 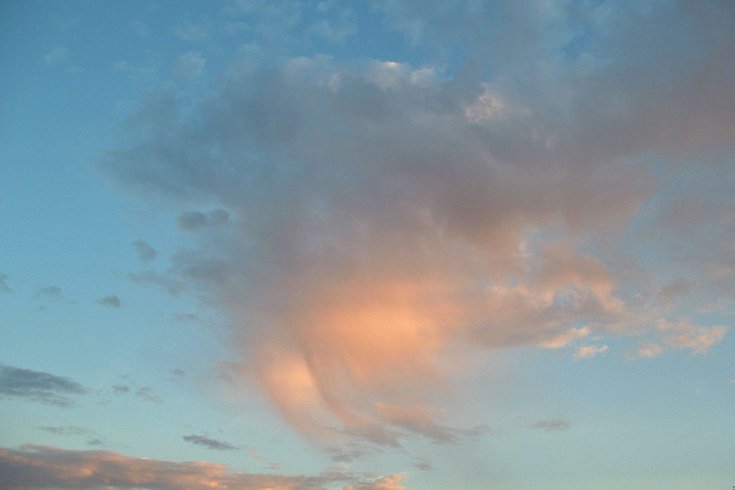 An example of a virga cloud, pictured above, shows streaks of rain falling from the base of a larger cloud. The virga cloud shown in the tweet below was photographed over the Lehigh Valley in Pennsylvania on April 19, 2021.

An unusual sight appeared over the Lehigh Valley on Monday night — a cloud producing rain that never reached ground level.

The rare virga cloud was photographed by reporter Stephanie Sigafoos of The Morning Call. A more precise location was not provided, but the formation isn't very common in this part of the United States.

What is happening over my house right how? @NWS_MountHolly 😬 pic.twitter.com/bLXKsH4q7f

Sometimes called jellyfish clouds, virga form as tendrils that descend from other clouds, often altocumulus and altostratus clouds. Heat from the ground evaporates the precipitation as it falls from the underside of a larger cloud.

As seen in Sigafoos' photo, virga clouds are most often observed when they're illuminated during a sunset, and a breeze accentuates the curls of the tendrils. In the winter, these strips of precipitation can appear more stark when they're frozen prior to evaporating in the dry air below.

In North America, virga clouds are usually seen in deserts out west or in the Canadian prairies. Around the world, they appear commonly in the Middle East, Australia and North Africa.

Under more stormy conditions, virga clouds can sometimes precede a microburst, a localized column of sinking air that may be wet or dry and can cause significant destruction on the ground.

In other cases, precipitation from virga clouds can "seed" storm cells by transferring particles into supersaturated air, forming the nucleus of a thunderhead.

The virga seen on Monday seems to have been a pretty mild event, but a rare natural display nonetheless in a region that doesn't often get to see it.