Calf from antelope species, extinct in the wild, born at Lehigh Valley Zoo

The scimitar-horned oryx, which was once widespread in North Africa, is among the possible inspirations for the unicorn myth 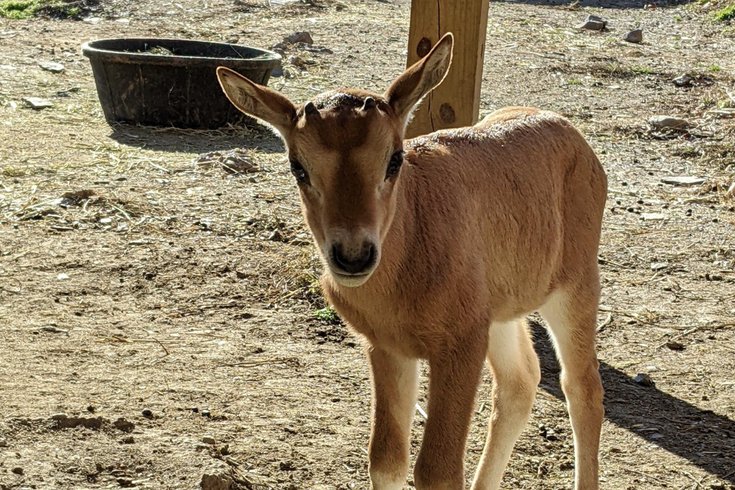 Eclipse, a scimitar-horned oryx calf, was born at the Lehigh Valley Zoo in November. The antelope species is extinct in the wild.

The Lehigh Valley Zoo is celebrating the recent birth of a scimitar-horned oryx, a species of antelope that's considered extinct in the wild. The zoo in Schnecksville is among those participating in a captive breeding program aimed at ensuring the survival of the species, known for its long, curved horns.

The calf, named Eclipse, was born Nov. 9 to mother Too Haute after a nine-month gestation period. Eclipse and her mother have been spending time together off-exhibit. The calf will be considered independent at about 14 weeks old.

Lehigh Valley Zoo, in conjunction with Lehigh Valley Health Network (LVHN), has officially announced that another...

The scimitar-horned oryx was declared extinct in the wild in 2000 on the International Union for Conservation of Nature's Red List of Threatened Species.

Once widespread in North Africa, the species faced steady population decline during the Neolithic period, beginning about 12,000 years ago. Climate change at the time drove habitat loss and severe drought. One of the species' most notable adaptations is its ability to go 9-10 months without drinking water. Instead, oryx absorb it through the water-rich vegetation they eat. Historically, the species also has been hunted aggressively for its meat, horns and hides.

In Chad, a landlocked country in north-central Africa, the Ministry of Environment and Fisheries teamed up with the Sahara Conservation Fund in 2016 to begin repopulating captive-bred scimitar-horned oryxes in the wild. The goal of the program is to reach a target of 500 self-sufficient scimitar-horned oryxes. The species also is bred in captivity in special reserves in Tunisia, Senegal, Morocco and on ranches in Texas.

The Cape May County Zoo has a herd of five scimitar-horned oryxes. Four of them were born there and the fifth came from the Kansas City Zoo.

Scimitar-horned oryx only produce one calf at a time. At birth, calves weigh 20 to 30 pounds; mothers separate from the herd to nurse and bond with their newborn.

The species is sometimes theorized to be the origin of the unicorn myth, since its horns are made from hollow bones that don't regrow. From a profile view, the scimitar-horned oryx may appear to have a single horn. Also, if an oryx lost one of its horns, it may have been mistaken for the mythical creature.

The 29-acre Lehigh Valley Zoo, which is a member of the Association of Zoos and Aquariums, said it will share more information in the future as Eclipse continues to grow and enter the exhibit space.