GOP race should serve as warning in battle for civic pride

Oh, the perils of democracy.

The steak sandwich from The Groove Cheesesteak Co. in Pittsburgh is among the 20 nominees, and was leading (seemingly partly due to media campaigning in the western half of the state) the pack as of Wednesday.

Well, as of Saturday, it was still on top.

As our own Brian Hickey noted in our original article, the problem may be that so many Philly-area establishments — 15, to be exact — have been nominated, therefore potentially splitting the local vote.

Now, as of Saturday, there are still 23 days left to vote. Theoretically, there's still plenty of time for one of the Philly steaks to rightfully overtake Pittsburgh. Right?

Wrong. Have you watched any news station even once over the past 9 months? Glanced at the Washington Post or POLITICO? Spoken to any Republican not wearing a "Make America Great Again" hat?

Members of the GOP establishment, as well as journalists and pundits, told themselves for months and months into Donald Trump's campaign that, surely, someone would rise up and overtake the always outspoken and oft-controversial candidate.

One only needs to look at the dormant campaign websites for Marco Rubio and Jeb Bush to see how that panned out. After that, swing by the latest polls. Then the current delegate count.

Philly, let's not get Trumped. Among the 15 local nominees, you likely have your preference. Maybe you enjoy your steak most under the neon lights of Geno's, or on a picnic table outside John's Roast Pork, or while strolling South Street after visiting Jim's. 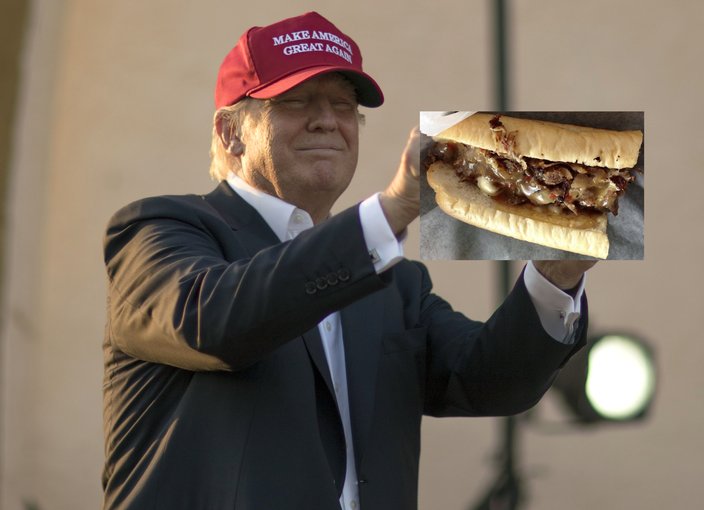 Donald Trump holds up a cheesesteak from The Groove Cheesesteak Co. in Pittsburgh.

But in a battle for civic pride, however stereotypical and overused the symbol may be, personal preference takes a seat to the greater good.

As you can see in the leaderboard, Dalessandro's Steaks — the eat-in, roadside spot in the northwest corner of the city — sits right behind The Groove Cheesesteak Co. It actually overtook the Pittsburgh restaurant Friday for a brief period of time before again falling to second place.

Which is why we should rally behind Dalessandro's. Is it your favorite? Maybe, maybe not. The author prefers their hoagies to their steaks, and prefers Shank's on Columbus Boulevard above any of the nominees.

But you can bet your buns I'm voting for them on every desktop, smart phone and iPad I can get my hands on.

Just like with Ted Cruz for those in the #NeverTrump movement, it's too late to squabble over who ought to take on the top dog. Let's get behind our fastest horse and ride it out.

As with any qualified choice in a crowded field, there are the pros. Dalessandro's also serves beer. Ted Cruz is a big fan of "The Princess Bride."

And of course, there are cons. Dalessandro's is a bit out of the way for those residing in Center City. Cruz is the subject of some pretty wild conspiracy theories.

For all we know, the steaks from The Groove in Pittsburgh may actually be quite tasty. Yelp reviews are above average, at best.

But that's obviously not the point. We can't let Pittsburgh win a contest for a delicacy synonymous with Philadelphia any more than we can let Sidney Crosby skate the ice without letting him know exactly how we feel about him.

So, Philly, let's cast our votes for Dalessandro's, and let’s do it now. Still not convinced? Take it from this guy.