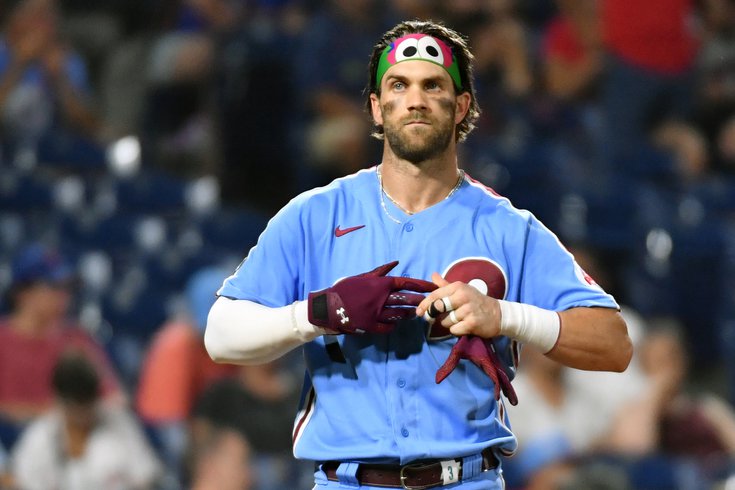 UPDATE [3:17 p.m.] - The Phillies and Rockies are the final two teams in the running for free agent third baseman/outfielder Kris Bryant, according to MLB analyst and former executive Jim Bowden.

The Rockies are in tense negotiations with Bryant, Bowden said on CBS Sports HQ, but that Bryce Harper is also pushing Phillies president Dave Dombrowski to get a deal done.

You can read more on where things stand HERE.

Another addition to Phillies camp: Righty reliever Dillon Maples, who had a 2.59 ERA in 31 1/3 innings with 40 K and 25 BB for Cubs last season.

Maples, who will be entering his age-30 season, has spent his entire pro career with the Cubs. After only pitching 23.1 innings during his first four seasons in the big leagues, his 2021 served as a mini-breakout performance in a small-sample size of 28 appearances.

The Phillies need all the bullpen help they can get. If Maple continues his 2021 performance in a more prominent role, perhaps this could be a little steal for the Phils.

In a typical MLB offseason, there is no real reason a team can't be patient.

If you recall the 2019 offseason — the one that saw the Phillies land Bryce Harper — there was very little movement at all until the Phils finally inked their man after spring training had already begin.

Every year it's a boring waiting game. But with the lockout pushing everything back by nearly 100 days, teams have incentive, alas, a requirement to move quickly.

The Phillies seemed to have missed the memo.

With games slated to commence in Clearwater this weekend, the Phillies still have no idea who'll be manning the outfield alongside Harper, what their lineup will look like, or even if they have a set starting pitching rotation.

The clock is ticking and Dave Dombrowski has done little aside from adding veterans to his bullpen and a controversial re-tread to a platoon in one of the teams OF spots.

Bryce Harper, who is working out at the team's spring facility, spoke to the media Monday and has faith that the team will spend at least the remaining $30-$35 million they can spend before paying the league's new luxury tax at $230 million total. Here's some of what he said, via Todd Zolecki at MLB.com:

“There’s a lot of players out there that are really good,” Harper said Monday morning inside the Phillies' clubhouse at BayCare Ballpark. “You’ve got [Kyle] Schwarber, you’ve got Nicky [Castellanos], you’ve got KB [Kris Bryant]. You’ve got a lot of guys out there that could help this team win, that can lengthen our lineup. As you guys have seen, we’re trying to lengthen our bullpen the best that they can. I don’t think we’re done. I don’t think we’re going to settle for just that right now.”

“I think we will go all the way to $230 [million], as of now, I hope,” Harper said. “So I think that's really going to impact our team to go out there and get the guys that are best available and that are smart and work for our team. There’s proven winners out there that help us today.”

So Bryant, Castellanos, Schwarber or somebody like Michael Conforto is the expectation at this point. It would be surprising if the Phillies came up empty.

“Yeah, absolutely,” Harper said. “I mean, it’d definitely be a downer. But you know, if that's the way we’re going to go, you’ve got to put your faith and trust in [general manager Dave Dombrowski]. I never second-guess him. He’s a proven winner everywhere he’s gone, and I’ve put my faith in him to do what’s best for our team and give us the best chance to win.” [MLB.com]

You heard it from the man himself. Harper trusts Dombrowski. Harper is the one who helped pressure the team to extend J.T. Realmuto and who spoke frankly last year about how terrible the franchise's farm system is. He seems to be a pretty trustworthy source.

And with the days drifting away, the Phillies will need to strike in the next few days. Will it be Kyle, Nicky or KB?

Follow along, right here all day long with our live stream and open thread and don't miss a single rumor, update or angry Phillies-tweet rant: