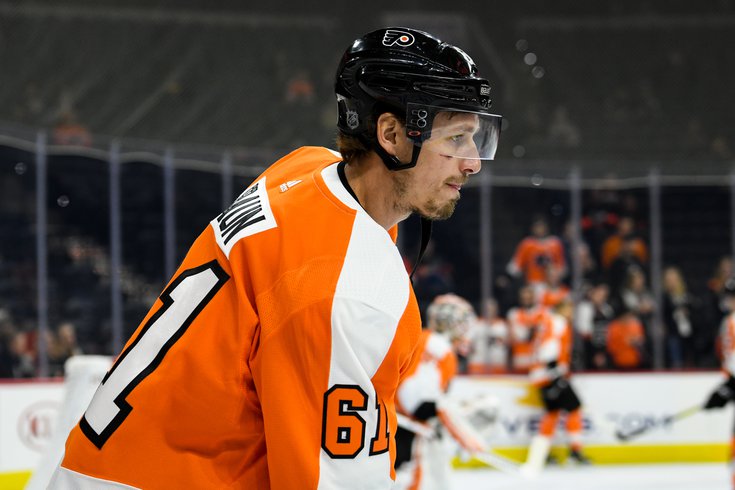 Justin Braun skates during warmups before the Philadelphia Flyers game against the Vegas Golden Knights at the Wells Fargo Center in Philadelphia on October 21, 2019. (Kate Frese)

UPDATE [8:30 p.m.] — And just like that, Gaudreau to the Flyers hopes are officially dead.

Sportsnet's Elliotte Friedman reports that the South Jersey-born winger will sign with the Columbus Blue Jackets.

The Flyers made a series of small signings on Wednesday, but due to their tight salary cap constraints, the club was unable to go for any of the big names on the market. General manager Chuck Fletcher declared the team done with free agency afterward.

A source confirms Justin Braun has re-signed with Flyers on one-year deal.

The 35-year old will likely be a third-pairing defenseman and a steadying hand for the Flyers after he was one for much of last season before being dealt to the Rangers.

UPDATE [2:37 p.m.] – The Flyers are finally making the noise, but not the kind anyone was hoping for.

Per Sportsnet's Elliotte Friedman, veteran defenseman Justin Braun is on his way back to Philadelphia, along with forward Nic Deslauriers, a 31-year old career fourth-liner...

Heating Justin Braun and Nic Deslauriers are going to PHI

On a four-year contract.

The Nic Deslauriers deal is 4 years + just under $2m/per season.

Curious, to say the least.

UPDATE [2:51 p.m.] – Less than 24 hours after being bought out of his contract by the Flyers, winger Oskar Lindblom has a new home with the San Jose Sharks, per The Athletic's Corey Masisak.

Oskar Lindblom is expected to sign with the Sharks, per a league source. He was just bought out by the Flyers recently.

TSN and The Athletic's Pierre LeBrun added that Lindblom is expected to earn $2.5 million annually, and San Jose announced the contract as a two-year deal once it was made official.

The #SJSharks have signed forward Oskar Lindblom to a two-year contract.

The decision to buy out Lindblom, after his comeback from cancer, wasn't going to be a popular one in Philly and was apparently one the team didn't want to make either.

I think everyone, including the Flyers look forward to the next chapter in Oskar Lindblom’s story. Happy to report there’s free agent interest in Lindblom. Philadelphia was gutted in having to the make the decision they did to move on.

TSN's Pierre LeBrun broke the deal just after free agency opened at noon. It'll be a three-year contract at $6.5 million per for the former Flyers captain, officially closing the door on the idea of any potential reunion in Philly.

Claude Giroux of Hearst, Ontario, agrees to a three-year deal with the Ottawa Senators. $6.5 M AAV per season.@TSNHockey @TheAthletic

The Flyers will travel to Ottawa on November 5, then the Senators come to the Wells Fargo Center on November 12. Mark those dates down.

UPDATE [10:38 a.m.] – At least one homecoming might be in the making today as TSN's Pierre LeBrun reports that Ottawa is the frontrunner to land former Flyers captain Claude Giroux.

All signs point to the Ottawa Senators being the front runners to land UFA star Claude Giroux when the market opens today. @TSNHockey @TheAthletic

NHL Network correspondent Renaud Lavoie is also saying that the Flyers are still looking to shed van Riemsdyk's cap hit, but, as rumored yesterday, teams are asking for a high draft pick to take that salary on.

Flyers are trying to trade JVR. Some teams are interested but are asking Philly to give a high pick with JVR. I don’t believe it makes sense for the Flyers.

Two league sources who I reached out to regarding Johnny Gaudreau both believe the Devils are the front-runners here. One specifically said he is "pretty sure" Gaudreau doesn't end up with Flyers.

The Flyers have made a series of moves that seem to imply they are intending to be players in free agency this offseason, potentially when it kicks off at noon Wednesday.

It all started last summer, when the team chose to go hard for veteran mercenaries, trading for Ryan Ellis and Rasmus Ristolainen to shore up their blue line, shedding younger players and draft picks to do so. On draft day, Philadelphia did more of the same, trading a series of future picks for controversial defenseman Tony DeAngelo.

These moves only really make sense (at least in theory) if they are trying to build a team that can win now — though doing so with the players they've brought in is far from an assurance of contention.

Should they blow it up and try to rebuild in earnest? Possibly. But yesterday the team wiggled its way to just over $3 million in cap space by saying goodbye to fan-favorite Oskar Lindblom. The makings are there for fans to see more moves to make cap space and then a big signing — potentially former Flames star Johnny Gaudreau.

Philly is Gaudreau’s top choice but Flyers need to clear $$. They’ve been trying to move JVR’s contract.. If not, Gaudreau may sign with another Metro team.

NYR among top suitors for Kadri, but he’ll have options.

The Jersey native became a free agent and wants to explore his market, turning down a deal in the eight figure per season range. Will the Flyers make a desperate push to bring in the star and become relevant again?

Follow along right here all day long with the latest news, analysis, updates and rumors with our live thread and open stream below: