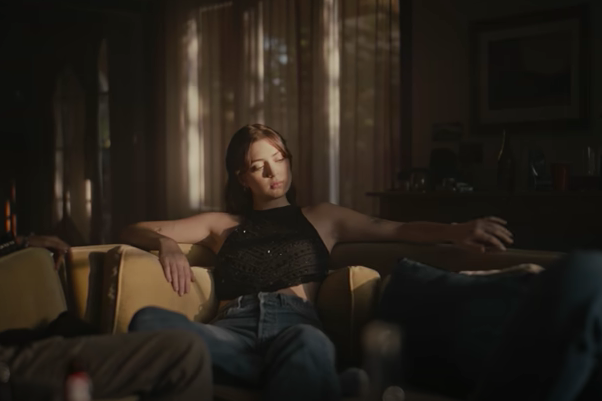 Montgomery County native singer and songwriter Lizzy McAlpine released the third single from her newest project, "five seconds flat." Following her success on TikTok and a performance on "Jimmy Kimmel Live" in November, McAlpine has gained mainstream acclaim as an artist-to-watch.

Lizzy McAlpine has only recently gained mainstream success as an artist, but she has been recording and releasing original music since she was a student at Berklee College of Music in 2018. With the release of the third song off her latest project, the Montgomery County native's sometimes angry, always in-her-feelings sound is something to watch out for.

McAlpine's "all my ghosts" provides listeners with a heartbreak retrospective that takes the singer back through the now "haunted" settings of a past relationship. The accompanying video released on Wednesday brings listeners along for the ride – passing empty aisles in a dingy convenience store, standing under fluorescent store signs, and trying to get out of bed.

The singer/songwriter's social media presence has catapulted her into the mainstream music scene, with a debut late night performance on "Jimmy Kimmel Live" in November, as well as a feature on Zane Lowe's Apple Music 1 radio show on Wednesday afternoon as a "World First."

"What a great record that is, from start to finish," Lowe said, comparing McAlpine's sound to Kasey Musgraves and Olivia Rodrigo. "Heartbreak and heartache has to go somewhere."

While McAlpine's career is older than the TikTok music phenomenon she created during the COVID-19 pandemic, her nearly 400,000 followers and 8 million likes is no small feat on the popular video app. McAlpine initially got her start posting cover songs to her Soundcloud account.

Her second studio album titled "five seconds flat," is slated for an April 8 release date. She released the tracklist on Twitter following her feature on "The Zane Lowe Show." Along with her three pre-released singles, the album has a variety of featured collaborations, including one with Grammy nominee for the coveted Best New Artist FINNEAS. His sister Billie Eilish won the same award back in 2020.

pre-order is available now, along with pre-order for the vinyl & deluxe vinyl on my website :')

cannot wait for u guys to hear it. i am obsessed. pic.twitter.com/STBxnejOjo

Another featured artist is Ben Kessler, who also hails from the Philadelphia suburbs and spent most of his formative years performing at World Cafe Live and in-studio at WXPN. A common collaborator with McAlpine, they previously released "I Think I" in September 2021.

Other collaborators include fellow TikTok star Jacob Collier with the pre-released single "erase me," and New York-based singer Laura Elliot.

McAlpine's first studio album, "Give Me A Minute," was released in 2020, but the singer believes it no longer reflects who she is as an artist.

"All the projects I have put out have been about chapters of my life," McAlpine told Clash Magazine in September. "I would describe it as young and naive because I know so many more things about life now."

McAlpine is set to embark on a tour with British singer/songwriter (and fellow social media star) Dodie, and will make a stop in Philadelphia at The Fillmore on Feb. 22. Limited tickets are still available.

Pre-save and pre-sales of "five seconds flat" are currently available on McAlpine's website.