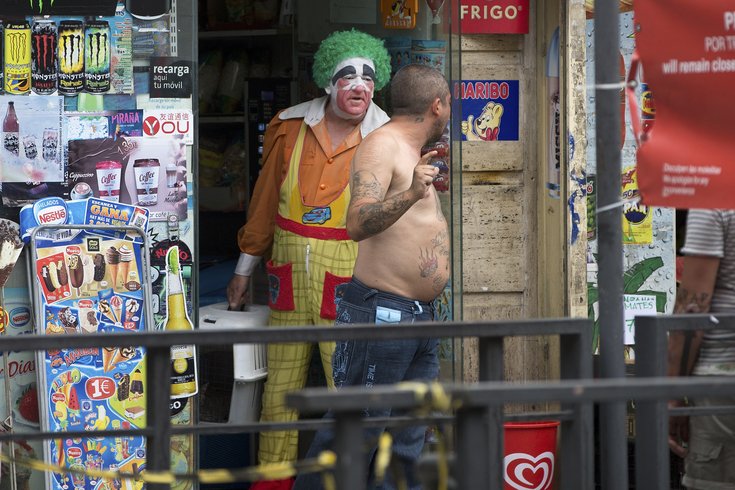 A man dressed as a clown carrying a container with a cat inside, argues with another man at the entrance of a food and drink store in the working class district of Vallecas in Madrid, Spain, Friday, Aug. 26, 2016. Across the Atlantic, reports of 'creepy clowns' have communities (and real clowns) on edge.

This month, they’ve gotten closer to hitting home, with reports of the menace stretching north to Pennsylvania’s Schuylkill and Huntingdon counties, about 100 miles northwest, and 200 miles west, of Philadelphia, respectively.

We’re talking, of course, about the onslaught of concerns – both real and fabricated – about creepy clowns terrorizing the youth (and, let’s face it, adults) of America. It shows no signs of relenting.

It’s the type of story that has the makings of a media maelstrom, tapping into deep-seated fears some harbor regarding figures many associate with happiness and joy (and Halloween is right around the corner!).

Let us be clear, though, children aren’t getting abducted, and this isn’t a pack of John Wayne “Pogo” Gacy wannabes spreading like a balloon-bending virus.

In fact, the biggest victims of creepy-clown madness are non-creepy clowns who make a living by entertaining at children’s parties and the like.

"All the clowns I know are talking over social media and emails about it. They’re all being approached about it. It’s quite disturbing for us." – Susan 'Snickers' Saunders

That’s what prompted Randy Christensen, president of the World Clown Association, to post a video on YouTube about the “scary clowns” epidemic.

“We try not to focus on the negatives, but just provide a positive image of clowning,” said Christensen, sans face paint, drawing parallels to police impersonators. “Whoever is doing this crazy stuff is not a clown.

"This is somebody who is trying to use a good, clean, wholesome art form and then distorting it trying to gain access to a child. This is not clowning. This person is not a clown. I try to make that very clear.”

He then urges good clowns to go out and present a positive image of clowning for all to see.

This week, PhillyVoice interviewed a trio of clowns – through the Mid-Atlantic Clown Association and beyond – to gauge their reaction to the spate of stories and worries about the impact on their future clowning endeavors.

While they haven't seen much of an impact on bookings, there's fear that could be the end result of imposters preying on the fears of some to hurt the joy they bring to many. 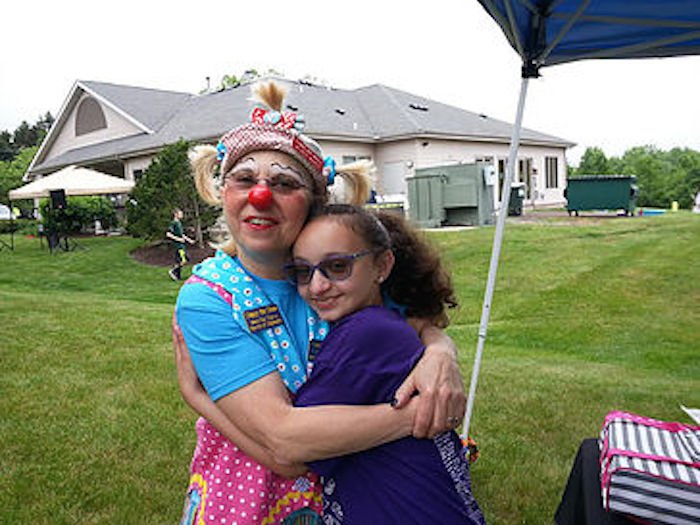 Courtesy of Chippy The Clown/for PhillyVoice

Chippy the Clown, of Hatboro, chooses not to pay much attention to the creepy-clown reports as her work as a clown centers on positivity.

“I really, really try not to pay attention to the negative energy. Chippy is such a positive, loving clown. I don’t want to put that energy out there, because when you do, you get more of it back.

“I don’t think it’ll have a negative impact since Chippy has a really, really good reputation. I’ve worked with a teacher who’s uneasy with clowns for the past five or six years. She was afraid of me when I put the makeup on, so something must’ve happened in childhood that freaked her out; 100 percent, it’d freak her out. It’s a shame.

"Many people love clowns, and I love what I do. All of us have a reason why we’re clowning. As a child, I was bullied at school. Mostly in high school, some in middle school, but I was bullied a lot.

"I’ve been clowning since 1989. I worked at an electronics company, and my son was in the Cub Scouts. He’s 42 now. They had a parade and I didn’t know what I could do to contribute to it. My parents were poor, and I had never been to a circus before. Along comes this woman – 6 feet tall – and said, ‘Here’s my clown outfit.’ Well, I’m only 4 feet 10 ½ inches. She gave me a wig and a clown outfit. I used rubber bands to try and get it to fit and painted my face white with black circles because I didn’t know what clowns looked like. I’d never come in contact with them in my life before.

"During the parade, I met a boy in a wheelchair. He loved the puppet I had on my hand. I came home and said, ‘That’s it: I’m going to clown school.’ I was in electronics school at the time, so my husband worried I wouldn’t have enough time to do it. When he was away, I signed up.

"I did it because I was bullied, and children need to know they’re loved. As a clown, I can hug children, but you just can’t go up to kids (in a non-clown capacity) and hug them without someone calling the police." 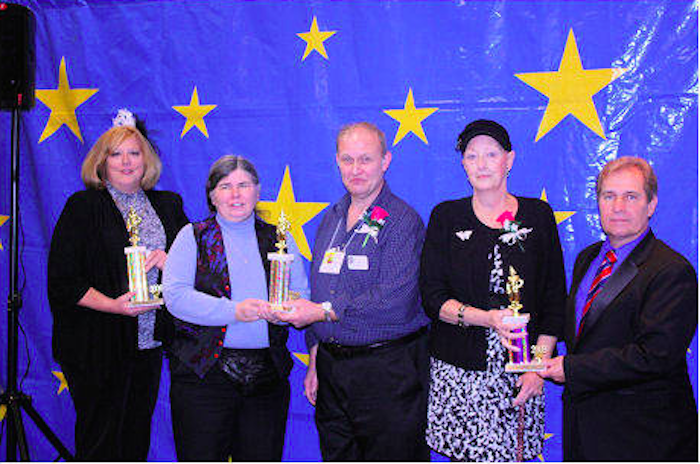 “All of these reports coming out is not good. All the clowns I know are talking over social media and emails about it. They’re all being approached about it. It’s quite disturbing for us because, you know, people might not want clowns to come to birthday parties and events like that.

"I have a full-time job. When I retire in two years, I plan on doing more clowning. Since I work, I can only clown on the weekends now. People who count on it for their full-time job, that’s their income, and they’ve been doing it for years. They’re really going to hurt from this.

"These movies that are coming out about creepy clowns, and the social-media reports, stuff like that catches fire. Now, we’re hearing reports about it in Pennsylvania.

"As clowns, we love to make people laugh. We go to hospitals, nursing homes and put on skits for them, sing with them. The club I belong to, we’d raise money for The Children’s Inn at NIH. They ask us (to go) all the time because the families stay there with their children as they’re getting treatment. I hope that doesn’t go away because people don’t want clowns around their children.

"This is very upsetting to people who are real clowns. Those being creepy are imposters trying to get attention.

"I’ve been a clown for almost 30 years. My mother was a clown before me. She decided that helping others was something she wanted to do, so she took some clown classes. I was busy raising kids and working, but she got my oldest daughter interested and by 7 or 8 (years old), she was clowning. Lo and behold, she drew me and another daughter into it. Now, a lot of times when kids get to be teens, they don’t think it’s cool anymore, but I stuck with it. My mother passed away a couple years ago. She was 88, and she was still clowning.

"We’re actually trying to get younger people involved. We have scholarships and programs to get children – we call them 'Junior Joeys' – interested with classes about how to do skits, makeup, balloons, juggling. But getting them interested is harder these days than it used to be." 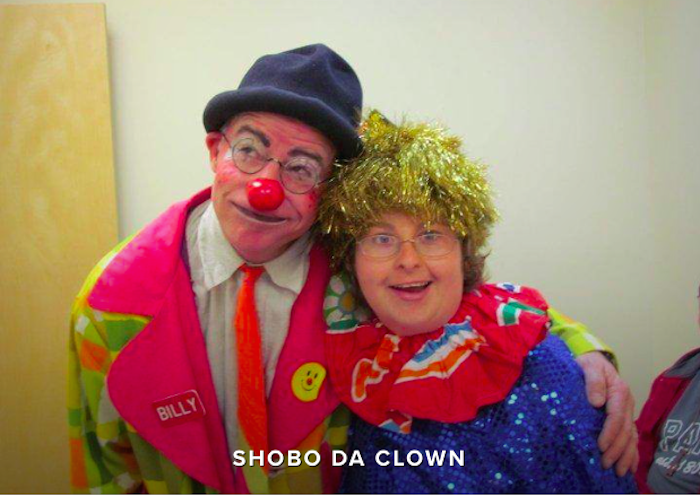 Shobo Da Clown says he hasn't seen the impact of creepy-clown stories on his clowning endeavors in South Jersey. Yet.

"(MACA South Jersey Director Harry “Shady” Mount) and I have a show called the Shobo and Shady Show and we have yet to see any damage done to our reputations (because of the creepy-clown reports). We also have a Clown Ministry called LAUGH Clown Ministry. 'LAUGH' is for Loving All Under God's House. All of our shows are about love and laughter. We also do monthly visits to our local hospital and nursing homes.

"That's what clowning is about: Spreading joy, kindness, togetherness, laughter and loving one another not by what they do or what they look like, but just by being there for one another.

"The recent news stories and articles are disturbing, not only because some news stories used reputable clown face images during the stories – like The Washington Post did to our friend KornPop from Texas – but it breaks the innocence of a clown with generalization.

"Today's society seems to be more of 'I'll get you before they get me.' Some not-too-educated clowns have a reputation of more of a 'sucker' joke where the clown may squirt water from a flower or pull a chair from someone.

"The art of real clowns always makes fun of themselves. Sometimes, the best part of an act is that you can identify yourself doing the same thing, a distortion of what a clown is gets generalized because of ignorance. The 'clown' becomes an easy target. 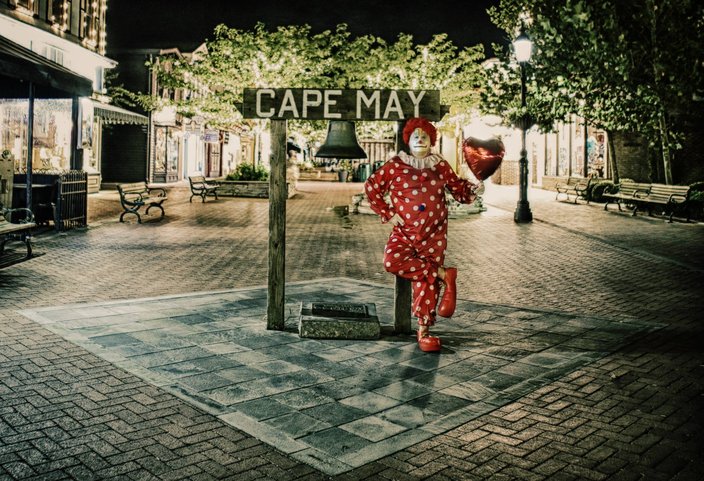 Shobo Da Clown thought this photo of 'an artsy, odd-looking clown picture on a Cape May Facebook page' speaks to a disconnect between real clowns and imposters.

"There was an artsy, odd-looking clown picture on a Cape May Facebook page. Zero the Clown was wearing a clown mask, holding balloons in a traditional clown jumpsuit in the middle of the night in the mall area. You should have seen the comments after the post. I gave them the analogy that a person in a lifeguard outfit on a beach is not a real lifeguard unless they are trained and certified. If you are in real trouble on the beach, I know I would want a real lifeguard instead of a person wearing a lifeguard outfit.

"It’s the same thing with clowning: Just because you use the word clown in your name and you walk in a clown outfit, it does not make you a clown.

"Creepy clowns creep me out – I've been clowning for over 25 years – as that's what they are supposed to do. The problem lies when people generalize all clowns in the same boat and don't see all the joy and good us hardworking clowns do.

"Instead of hatred toward clowns – which is a very easy path to follow, i.e. 'I don't know it so I hate it' –  I would ask all to take the harder path to love one another, even the creepy clowns.

"What we have found at hospitals, nursing homes, churches and during shows, if a person doesn't like clowns, we respect it, but after a while, nine times out of 10 times, that same person will come up to us to say how much they enjoyed our show.