A log of funny tweets from the first 2016 presidential debate

As contest enters final stretch, America's still in need of a good laugh 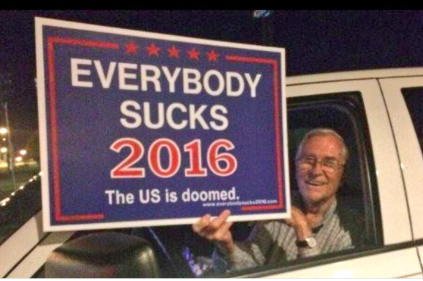 The final stretch of the 2016 presidential race is in full swing as the first of three debates was held Monday night at Hofstra University in Hempstead, New York.

To be clear, the outcome of this election is far from a joking matter at this pivotal moment in the history of the United States. Most of our conversations and news consumption surrounding the election are serious in nature at this stage of the contest between Democratic nominee Hillary Clinton and Republican nominee Donald Trump.

For all of the focus swirling around the two major candidates' "temperament," every one of us would do well to keep our feverishness from ruining relationships and damaging the free fabric that enables people with differing political viewpoints to co-exist.

So, to help lighten the mood, here are some of the more comical tweets that surfaced on Twitter on Monday night.

#debatenight did he say 400 pound hackers sitting in their beds? pic.twitter.com/7i5NjTgSsX

DT don't you worry, I got you brotha...gotta help a thirsty man #debatenight #Debates2016 pic.twitter.com/hk1bIII6TH

Hillary while Donald is talking about her bad "temperament" #debatenight #debates2016 pic.twitter.com/OMXZV01qGX

No need to watch this stupid debate. My vote is cast. #NeverHillary #NeverTrump @smod2016 pic.twitter.com/HtHiSWnMCH

Tfw you realize one of these two people is going to be president#debatenight pic.twitter.com/jcS8Aip2K2