A look around at the rest of NFC East: Some guys are in trouble 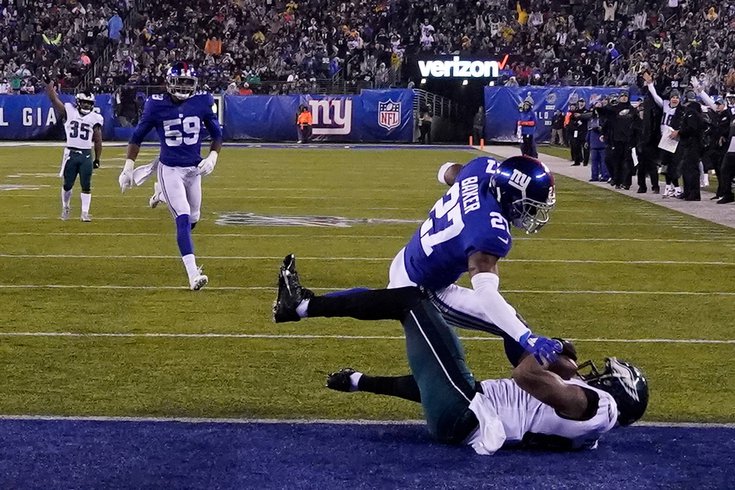 "DeAndre Baker has been through enough already," Baker's lawyer said on Sunday. "The man gave up a TD reception to Josh Perkins for God's sake."

For those of you who have not heard, a pair of players in the NFC East were arrested over the last few days. You're likely thinking, "Were they both Cowboys players, or was it only one Cowboy, and someone from another team?"

In yet another example of the weirdness that is 2020, there were no Cowboys arrested. Let's take a look around the division at the Giants', Cowboys', and Washington team's latest news.

Baker turned himself in to police in Miramar, Florida, after an arrest warrant was issued for him and Seattle Seahawks cornerback Quinton Dunbar, stemming from an incident that occurred last Wednesday in which Baker and Dunbar are both being accused of committing armed robbery with a firearm, and in Baker's case, aggravated assault with a firearm.

Baker was the third of three Giants first round picks in 2019. The Giants traded fourth- and fifth-round picks to move up from pick No. 37 to pick No. 30 to select him.

Baker played in all 16 games as a rookie, starting 15. He had 61 tackles and 8 pass breakups, with no INTs or forced fumbles. He had a rough rookie season, as he was picked on regularly. According to pro-football-reference, opposing quarterbacks had a 116.2 quarterback rating when they targeted Baker, completing 54 of 88 pass attempts (61.4%) for 850 yards (9.7 YPA) and 6 TDs.

Still, heading into 2020, Baker was once again projected to start for the Giants at corner. If his career is derailed by this alleged incident, it will be a substantial loss for the Giants.

Dunbar was perhaps Washington's best cornerback in 2019. He only had one year left on his contract, and he wanted an extension. Those talks stalled, and so Washington traded him to the Seahawks for a late fifth-round pick. While Dunbar did come with some injury concerns, that's seemed at the time like pretty weak compensation for a 27-year old legitimate starting corner.

To note, Dunbar's representation has vehemently proclaimed Dunbar's innocence, while Baker's attorneys have not been quite as aggressive in their rebuttals.

Washington did have a player arrest of their own over the weekend, when WR Cody Latimer was "booked on felony charges of assault in the second degree, menacing and illegal discharge of a firearm and misdemeanor charges of prohibited use of a weapon and reckless endangerment," per ESPN.

Latimer was a second-round disappointment for the Broncos the first four years of his career, but at least became a useful special teams guy and No. 4 receiver for the Giants the last two years. In 2019, he had 24 catches for 300 yards and 2 TDs.

He was likely to serve in a similar backup role for the receiver-starved Washington team, but with only $137,500 in guaranteed money, it will be easy for Washington to cut their losses, should they choose to do so.

Every year when the NFL schedule is released, the first thing Jeffrey Lurie does is look at whether or not the Philadelphia Eagles will have to play a Thursday road game on a short week of rest and preparation.

Each year, 30 of the NFL's 32 teams have to worry about that. There are two — the Dallas Cowboys and Detroit Lions — who don't, as they are rewarded with a home Thursday game on Thanksgiving every single year.

Meanwhile, the Eagles have had to play Thursday road games on short rest in each of the last three years, and five of the last six. They do finally get a Thursday home game in 2020, against the Giants, who have been similarly screwed by the NFL's schedule makers over the last decade.

Prior to the 2019 NFL Owners Meetings, the Eagles proposed that the Cowboys and Lions alternate playing road games on Thanksgiving every other year, an entirely reasonable idea that received little support from the rest of the league.

According to studies done by the Eagles (and, you know, common sense), it's a major disadvantage to have to play on the road on a Thursday after you've just played a Sunday game.

"We do a lot of data analysis of schedules and things like that, and short weeks, because you’re trying to prepare and recover and all those kinds of things, and one of the things that came up was the difficulty sometimes of short weeks on Thursdays," Lurie said at the 2019 Owners Meetings.

"Nobody wants to play away on Thursday night on a short week, and we feel it should be a balanced schedule in terms of teams that have to play on a short week, away. That’s all. It has nothing to do with Thanksgiving. It’s a great tradition in Detroit, Dallas, whatever, but just on a competitive basis, as soon as you look at the schedule, you want to know, are you on short week on a Thursday?"

Last week, Warren Sharp did an in-depth study on schedule inequalities (go read that in its entirety), and as usual when these types of deeper looks are conducted, the Cowboys were determined to have received significant advantages.

In rebuttal, Cowboys blog BloggingTheBoys.com noted one time that the Eagles had a head-to-head scheduling advantage over the Cowboys.