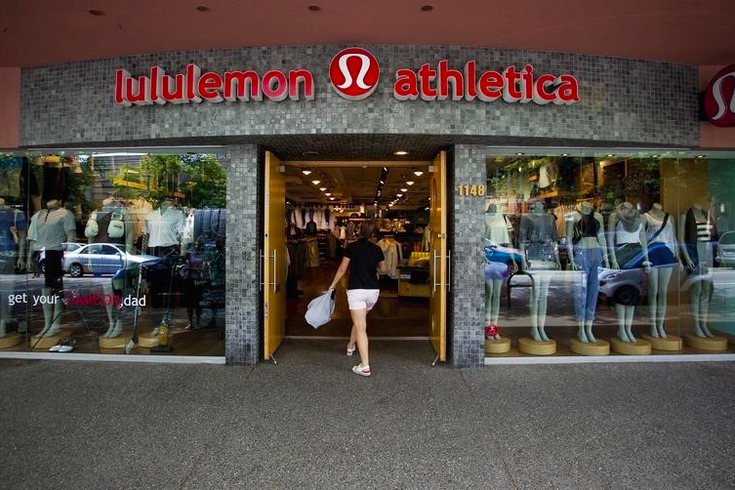 A woman walks into a store of yogawear retailer Lululemon Athletica in downtown Vancouver June 11, 2014.

The mysteries of Fishtown's new lululemon Local concept have finally been resolved.

We initially speculated below that the four new U.S. locations — in Fishtown; Fort Collins, Colorado; Bend, Oregon; and Sun Valley, Idaho — would be additions to the company's high-fashion lululemon Labs in Vancouver and New York City (pictured above), which serve as a pricier testing ground for the yoga-inspired locations across North America, Europe, and parts of the rest of the world.

As it turns out, the company is launching a brand new store concept altogether, known as a lululemon Local: a place to gather, do yoga, hold events, and check out the work of local artists and interior designers.

"The goal of the Local is to act as a community hub and allow us to speak directly to our community through localized and curated product allocations, community-driven activations and relationships with influencers in our communities," Webster said. "We aim to evolve alongside our guests outside of only their ‘studio’ experience in order to create a space that truly connects our guests with all aspects of their community."

The idea, another spokeswoman told us, is to take the traditional retail store and turn it into a connection point for neighborhood residents and regulars who embrace lululemon's values and apparel. What this will mean is still evolving, she added, but it could also include hi-intensity interval training sessions, launch parties, a space for Q & A's with ambassadors, and other community programs that support them in their daily "sweat life" (that's a company hashtag and branding slogan that really had us guessing for a month; see below how far off the mark I was, definitely not on purpose).

"It involves sweating once a day, personally developing and externally connecting," the spokeswoman said.

"The Local will be a space where we can highlight local makers, contributors and captains so as to elevate the work of our hyperlocal and innovative community," Webster said. "We will share information on the interior design as the opening [in late November] approaches."

Will there be food in the sweat life?

"Sure, we love to eat, so I’d expect to see a few surprises here and there," Webster said. "You can count on our team knowing the best places in town to direct to our guests’ individual sweat life."

One piece of this puzzle remained somewhat unclear: the address of the Local will be 1424-32 Frankford Avenue (Space B), the same address as luxury technical cashmere shop Kit and Ace. That store (1424 Frankford Ave.) is owned by none other than Chip Wilson and his wife, Shannon, who once respectively founded and served as head of design for lululemon.

"As part of our real-estate strategy, we beta-test different locations and markets with temporary spaces, while also introducing our e-commerce platform to locals," Cordon said. "We deliberately enter with short-term leases and minimal buildout to test and connect with the community."

The Canadian yoga-inspired apparel company, which also produces men's clothing, is reportedly bringing a new "local concept" to four U.S. locations that will support how each community lives their "sweat life," according to The Coloradoan.

What does that mean? After ruling out a store-sized sauna and a series of post-workout shower stalls for doing yoga alone — too much of a waste of water, but definitely not weird at all — we found this Globe and Mail article that describes Lululemon's new lab stores in Vancouver and New York City's NoHo neighborhood.

[It’s] more posh fashion boutique than yoga pant peddler. Bicycles hang on a wall near the entrance, a nod to the city’s commuter lifestyle; sewing machines sit on tables in the back.

The new store’s unusual design is intentional, and the differences are reflected in its offerings. There’s no sign of the standard yoga pants and stretchy workout tops. Boxy black sleeveless tees, slouchy beige tanks, and monotone waterproof blazers eschew the traditional athletic aesthetic for a more sophisticated, off-duty sidewalk feel.

Lululemon creative director Lee Holman described the concept as a tastemaking conduit to the main business, where the best of the exclusive designs can be incorporated into the company's core clothes. Head designer Marcus Le Blanc, formerly of Theory, added that he's had relatively free rein to develop the tones and styles on display at the New York shop.

Positioned as more of a luxury boutique, prices at the new concept range from $60-$450, although too few details are available to say that's what's coming to Philly. The three other locations are Fort Collins, Colorado; Bend, Oregon; and the resort town of Sun Valley, Idaho.

Here's what's interesting about the choice to demo in Fishtown. Last year, Chip Wilson and his wife, Shannon, opened Kit and Ace, a luxury technical cashmere shop, at 1424 Frankford Ave. The place offers a variety of athletic-inspired apparel in the range of $68-$500 and has a savvy social media team making the most of Snapchat as a dual "TV channel"-customer service associate.

Chip Wilson founded Lululemon and Shannon Wilson was the company's head of design. Could this be a competitive joust of some kind from Lululemon?

Details are still scarce on this venture — no location was given — and an email request for comment from Lululemon was not immediately returned. We'll update the story if we hear from them.