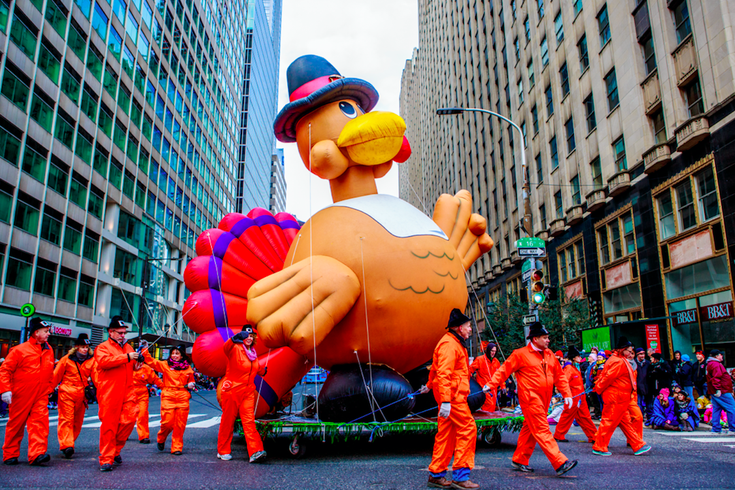 The oldest Thanksgiving parade in the country is almost 100.

Today is Thanksgiving, which means turkey, pie, and parades. Philadelphia’s parade kicked off on a truly brisk Thursday morning — it was 23 degrees at 9:00 a.m. (!) — so we won’t blame you if you decided to stay home instead of trekking to see the action in person.

Plus, this is 2018, which means you can take in the sights and sounds on the Internet!

Apparently, the crowds were a little underwhelming in the early going. It was cold!

Maybe it's early, maybe it's too cold, but the crowds are the thinnest I've ever seen at the #6abcTDP

The Mummers showed out in full force, with some pretty impressive coloring:

A supremely bad Grinch showed up and terrified us all:

Pretty sure that Grinch was from Kensington. Leftover discounted costume from "Halloween Spirit?" WTH was that?? #6abcTDP #Thanksgiving #ThanksgivingParade pic.twitter.com/he5dEc8Bch

Of course, no creepy Grinch can compare to the King of Philadelphia, Gritty:

IT'S @GrittyNHL!!!!!!!!! @Ginger_Zee is having a dance party in Philadelphia with Gritty! pic.twitter.com/j1apzJ9n1k

Apparently Gritty decided he should ride around the Good Morning America set in style:

Gritty is currently driving a golf cart on the GMA set to Vanessa Carlton’s A Thousand Miles pic.twitter.com/qgwJ3iFcc8

He participated and did a great job:

Unsurprisingly, everyone was (nicely) excited to see Gritty at the parade, more so than Santa Claus (boo):

In other news, the scene at the Art Museum was plenty festive:

Here's a good giraffe, although we would've appreciated a Snow Camel appearance:

This is a super good Turkey Hat in Center City, in front of the Santa Claus float: